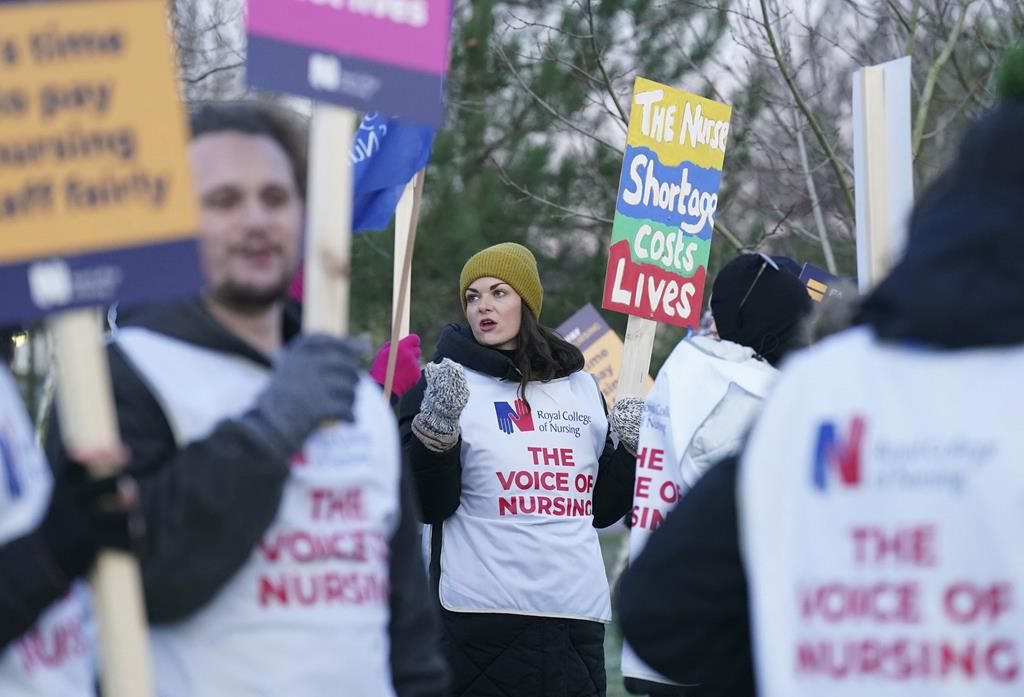 LONDON (AP) — Thousands of nurses in Britain walked out Wednesday in a new protest over pay, with no end in sight to a wave of strikes that has piled pressure on the U.K.‘s overburdened public health system.

Two 12-hour strikes on Wednesday and Thursday affect about a quarter of hospitals and clinics in England. Emergency care and cancer treatment will continue, but thousands of appointments and procedures are likely to be postponed.

Inflation in the U.K. hit a 41-year high of 11.1% in October, driven by sharply rising energy and food costs, before easing slightly to 10.5% in December.

The nurses’ union has been seeking a pay raise of 5% above inflation, though it has said it will accept a lower offer. The Conservative government argues that double-digit public sector pay increases will drive inflation even higher.

“Unaffordable pay hikes will mean cutting patient care and stoking the inflation that would make us all poorer,” Health Secretary Steve Barclay wrote in the Independent newspaper.

The government also has angered unions by introducing a bill that will make it harder for key workers to strike by setting ”minimum safety levels” for firefighters, ambulance services and railways that must be maintained during a walkout.

The Royal College of Nurses union has announced two more strike days next month, when disruption across the economy looks set to intensify. Feb. 1 is shaping up to be the most disruptive day yet, with walkouts by teachers, train drivers, civil servants and university staff. Ambulance staff are due to announce more strike dates later Wednesday.

Pat Cullen, head of the Royal College of Nursing, said the union had “extended an olive branch, in fact the whole tree, to government” and urged health officials to “get round a table and let’s stop the strikes so we don’t have to continue this into February.”

“I would say to the prime minister this morning: If you want to continue to have strikes, then the voice of nursing will continue to speak up on behalf of their patients and that’s exactly what you will get,” she told ITV.