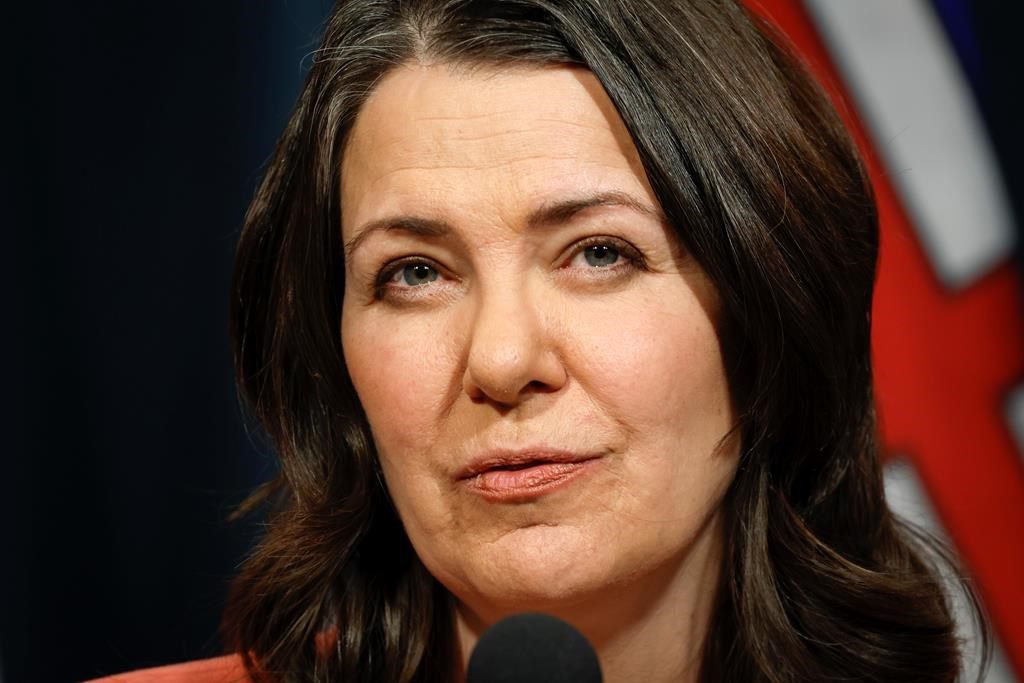 EDMONTON — Alberta Premier Danielle Smith has delivered a third version of what she discussed with justice officials over how to handle the prosecution of people charged with breaking COVID-19 health rules.

Smith told her Corus radio show Saturday that she has urged Justice Minister Tyler Shandro and his deputy attorney general to consider whether the cases were in the public interest and whether there was a reasonable chance of conviction before proceeding.

Prosecutors, under departmental guidelines, are already aware that these are the overarching principles to consider before pursuing any case.

“I wanted to ask them if they had looked at these cases in that light,” Smith told her radio show.

“They confirmed that that is the measure that Crown prosecutors use when they’re looking at these cases: reasonable likelihood of conviction (and) if it’s in the public interest. So we’re letting the court process play out.”

A day earlier, Smith issued a statement saying she went to the meeting seeking “options” on the COVID-19 prosecutions but didn’t elaborate on what alternatives she was seeking.

“They advised me the Crown prosecutors would independently make their decisions on whether or not to carry on with COVID-related cases.”

Three weeks earlier, Smith told Rebel News she used the discussions to impress upon officials that she believes the public is no longer onside with future COVID-19 prosecutions and crown lawyers should consider that point — along with the fact such cases were failing in court — when they make future decisions.

“I’ve put it to the prosecutors, and I have asked them to do a review of the (COVID-19) cases with those two things in mind and I’m hopeful that we’ll see a true turning of the page,” Smith told Rebel News on Dec. 21.

Smith faced accusations of interfering in justice when she announced Thursday that while she would let the court process play out on COVID-19 cases, “I ask (Crown attorneys) on a regular basis, as new cases come out: ‘Is it in the public interest to pursue and is there a reasonable likelihood of conviction?'”

Smith also told Rebel News she was talking to prosecutors directly, but this week Smith and the Justice Department said no such discussions occurred.

“Of course, I’ve never called a Crown prosecutor. You’re not allowed to do that as a politician. Everyone knows that,” Smith said on Saturday’s radio broadcast.

“I may have used some imprecise language, but my contact with the Justice Department has always been through the appropriate channels, and that’s the attorney general.”

Alberta Opposition NDP Leader Rachel Notley previously said Smith has entangled herself in a web of lies and a full investigation is needed into whether she is interfering in the administration of justice, especially given past statements in which she suggested her involvement is ongoing

The United Conservative Party premier has been a staunch advocate of protesters against COVID-19 health restrictions. She had long promised to pursue pardoning non-criminal violators of health restrictions, such as pastors who ignored gathering limits at services and people fined for not wearing masks.

Smith became premier in October after winning the party leadership by leveraging strong member support with promises to redress perceived abuses of individual rights and freedoms during the COVID-19 pandemic.

Since then, Smith has apologized to those charged under the restrictions and has called those unvaccinated against the virus the most discriminated group she has seen in her lifetime.

In October, when asked by reporters about offering amnesty to those prosecuted for breaking COVID rules, Smith did not rule the idea out

Notley says there is precedent for an investigation. Last February, a third-party report by a retired judge concluded that then-UCP justice minister Kaycee Madu tried to interfere in the administration of justice when he called Edmonton’s police chief to discuss a traffic ticket.

Madu was moved to a different portfolio under then-premier Jason Kenney. He has since been promoted to deputy premier under Smith.

This is the second time Smith has delivered controversial remarks over promises to help those she calls unjustly victimized by COVID-19 health rules.

In late November, Smith announced she was walking back a promise to introduce a bill to make it a human rights violation to impose restrictions on people based on their COVID-19 vaccine status.

In that same announcement, Smith said she was instead taking action directly. She said her government had contacted the Arctic Winter Games and convinced event organizers to drop their vaccine mandate.

John Rodda, committee president of the Games, said at the time he was not aware of any such call and said the committee made the decision to remove the vaccine mandate without any outside coaxing.

Smith’s office has declined to confirm her assertion that someone in government contacted the Arctic Winter Games.