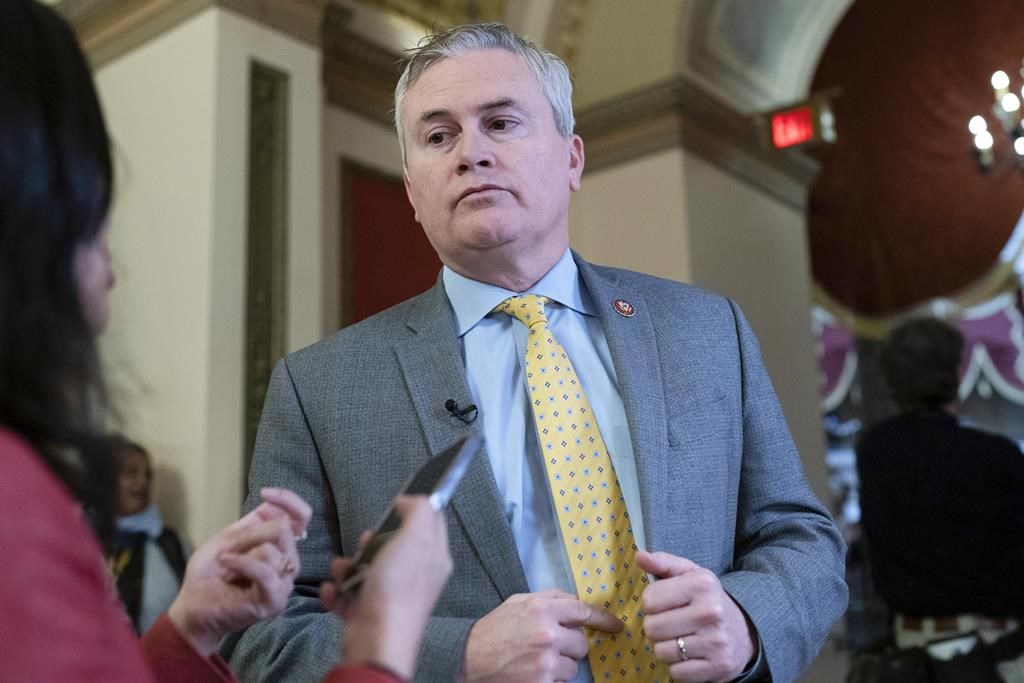 WASHINGTON (AP) — In early 2017, freshman Rep. James Comer found himself aboard Air Force One with the country’s two most powerful Republicans, President Donald Trump and Senate Majority Leader Mitch McConnell. As they returned to Washington from a Kentucky rally, the conversation turned to the president’s first legislative push, with McConnell encouraging Trump to pursue an infrastructure deal.

But Trump and House GOP leaders chose instead to carry out a futile fight to repeal the Affordable Care Act. It was a mistake that Comer believes has cost his party for years — and one that serves as a lesson for him as he takes charge now of the powerful House Oversight and Accountability Committee.

“Let’s commit to things that are achievable, not just red-meat talking points that will get you on Fox News for 4 1/2 minutes,” Comer told The Associated Press in a March interview as Republicans campaigned to regain control of the House.

Those high-minded words will soon be put to a test.

Comer, the grandson of rural Kentucky political leaders, will lead a committee whose members are among the most hard-line conservatives in Congress. Some have introduced articles of impeachment against President Joe Biden and pledged far-reaching investigations of his administration and family, particularly his son Hunter.

Comer has called for vigorous inquiries, too, and during Rep. Kevin McCarthy’s grueling path to being elected House speaker, argued that the drawn-out process — 15 ballots over several days — was only delaying the start of that much-needed work.

And yes, Comer has landed regularly on Fox News.

The 50-year-old, who often goes by Jamie and speaks in a thick Appalachian drawl, has been little known nationally. Comer is described by members of both parties as even-keeled and approachable, and his climb to power is playing out in an overtly partisan environment as Republicans hold a slim majority in the House and face Democratic control in the Senate.

Comer, first elected to public office at age 27, has pledged to go after waste, fraud and abuse in the government. But he is confronted by committee members utterly devoted to Trump and to returning him to the White House. Some cling to the baseless allegation that Trump beat Biden in 2020 and seem more bent on getting attention than achieving any legislative outcome.

The former state legislator arrived in Congress after losing the Republican nomination for governor in 2015, a mere 83 votes behind Matt Bevin, a tea party-backed rival.

Days before that primary election, a former college girlfriend outlined several allegations of abuse against Comer in an article in the Louisville Courier-Journal. Comer, who acknowledged dating the woman, denied abusing her, saying at the time that the crime of domestic violence “sickens me.”

He came to Washington with a mission to work his way up from the backbench of the committee he now heads. In the last Congress, he became the top Republican on committee, which was led by then-Rep. Carolyn Maloney, D-N.Y.

Maloney, who lost a Democratic primary to Rep. Jerry Nadler last year, said she had a good working relationship with Comer. “He was a partisan fighter, but it was also reasonable,” she said in an interview. “And we did work together on several bills that helped the country.”

Asked whether she thought Comer would be able to lead the committee in a divided Washington, Maloney said: “I think you’ll soon find out. He was a serious legislator with me.”

Appointed to Comer’s committee this past week were ultra-conservative firebrands and loyal Trump allies Reps. Marjorie Taylor Greene of Georgia, Lauren Boebert of Colorado and Paul Gosar of Arizona. Their additions are expected to further complicate the chairman’s ability to not stray the committee into the fringe.

“I think that Kevin McCarthy has put him in something of a squeeze play by giving in to all of the extreme right-wing demands in order to assemble his thin majority and then placing so many of the extremist members on the Oversight Committee,” said Rep. Jamie Raskin of Maryland, the top Democrat on the committee.

“And I know it will take every bit of political skill that he has to both conduct serious oversight and then also accommodate the demands of a group of members who can often be fanatical and unreasonable.”

Greene introduced articles of impeachment against Biden on his first day of office and promised to pursue the effort once seated on the committee.

“Joe Biden, be prepared. We are going to uncover every corrupt business dealing, every foreign entanglement, every abuse of power, and every check cut for The Big Guy,” Greene said in a statement last week.

The White House responded this week by saying that Comer is “setting the stage for divorced-from-reality political stunts.”

Ian Sams, a spokesperson for the White House counsel’s office, said in a statement that the chairman “once said his goal was to ensure the committee’s work is ‘credible,’ yet Republicans are handing the keys of oversight to the most extreme MAGA members of the Republican caucus who promote violent rhetoric and dangerous conspiracy theories.”

That’s the acronym for Trump’s 2016 campaign slogan, “Make America Great Again,” which has since come to describe his policies and supporters.

Comer said he has made it clear to those members that their mandate is the truth: “I said, `We’ll look into anything, but it’s not going to be on Oversight stationery unless we can back it up with facts.”

Rep. Byron Donalds, R-Fla., who is returning to the committee this session, said he has confidence in Comer’s ability to steer the ship. “He’s interested in what the facts and the details are,” Donalds said. “He’s not hunting for news cameras and stuff like that. He just wants to get the job done.”

A new committee member, Rep. Lisa McClain, R-Mich., said Comer is going to bring a level of “deliberateness” to “a very firebrand committee.”

One of the main GOP targets will be the Biden family, specifically the business dealings of Hunter Biden and James Biden, the president’s brother.

Republicans now hold subpoena power in the House, giving them the authority to compel testimony and conduct a far more aggressive investigation. GOP staff has spent the past year analyzing messages and financial transactions found on a laptop that belonged to Hunter Biden. Comer said the evidence they have compiled is “overwhelming, but did not offer specifics.

Hunter Biden’s taxes and foreign business work are already under federal investigation by a federal grand jury in Delaware. The younger Biden has never held a position in the presidential campaign or in the White House. But his membership on the board of a Ukrainian energy company and his efforts to strike deals in China have long raised questions about whether he traded on his father’s public service.

Joe Biden has said he has never spoken to his son about foreign business. There are no indications that the federal investigation involves the president.

And Comer has pledged there won’t be hearings regarding the Biden family until the committee has the evidence to back up any claims of alleged wrongdoing. He also acknowledged that the stakes are high whenever an investigation centers on the leader of a political party.

“I just feel like, for better or worse, we’re going to be judged differently than Adam Schiff,” Comer said, referring to the Democratic congressman from California who led the first impeachment of Trump and who has become a boogeyman of the right. “I don’t think he suffered the ire of the media like Republicans would suffer if we crank out stuff that’s not true.”