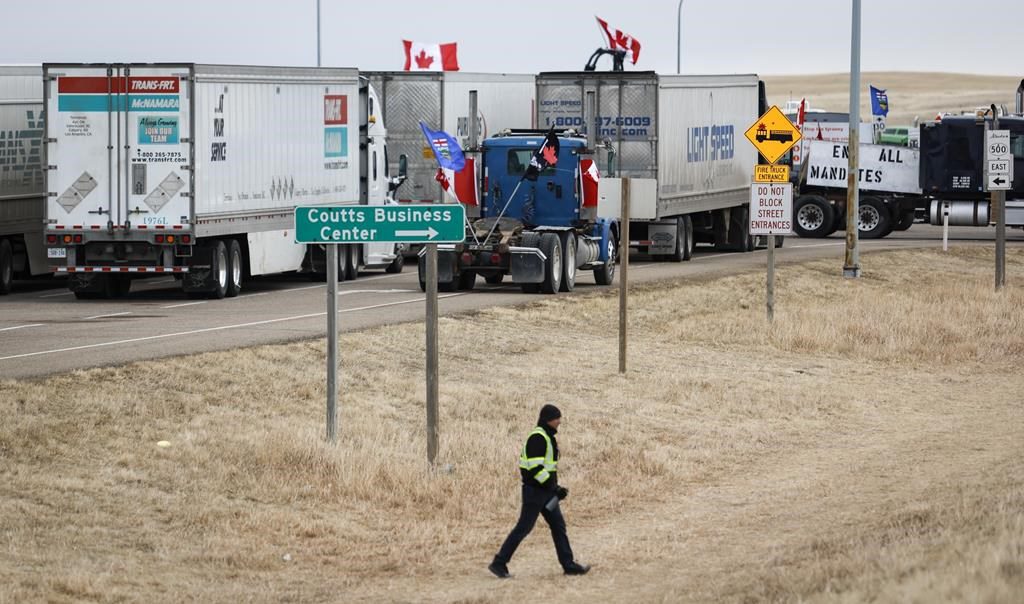 EDMONTON — Alberta Premier Danielle Smith has asked for an email search this weekend to determine if her staff have been contacting Crown prosecutors and interfering in cases involving the Coutts, Alta., border crossing blockade.

Smith says there are 34 staffers in her office and 400 prosecutors to check on, and says she expects to have results early next week to respond to a story reported Thursday by CBC News.

“The CBC has said they don’t have the emails. They did not provide us with names, and so I have asked for our independent public service to do a review of emails,” Smith said Saturday on her Corus call-in radio show.

“We have an IT department that can look at all of the emails that have been received by Crown prosecutors and assess it against all of my staff and see if this email that the CBC is making reference to even exists.”

“As soon as we get the response back, we’ll make sure the results are public,” she added.

Smith reiterated she has not talked to Crown prosecutors, has not directed any staffer to do so, and isn’t aware of any staffer doing so.

“It is a serious allegation,” said Smith.

“If a staff member had been in touch with a Crown prosecutor, we’d obviously have to take appropriate action.”

Smith made the comment in response to the CBC News report —citing unnamed sources — that said a staffer in her office sent a series of emails to Crown prosecutors last fall questioning and challenging their approach to the cases.

CBC said it has not viewed the emails in question.

RCMP laid charges against several people involved in the three-week blockade at Coutts a year ago to protest COVID-19 restrictions. The charges range from mischief to conspiracy to commit murder.

Police have alleged a group at the protest was willing to use force against officers if the blockade was disrupted and described the threat as “very serious.”

The Opposition NDP has renewed its call for an independent investigation, given that the United Conservative Party premier has also made numerous, conflicting statements on discussions she has had with top justice officials on how they prosecute cases related to violations of COVID-19 health restrictions.

The NDP says Smith already crossed the line and interfered in justice by saying in an interview before Christmas that she had asked prosecutors to consider that COVID-19 cases are no longer in the public interest.

The NDP called for an independent inquiry earlier this week over Smith’s conflicting statements on conversations she has had with Justice Minister Tyler Shandro and the deputy attorney general about COVID-19 cases.

Smith, in a series of recent conflicting statements and interviews, has said she both did and did not talk to prosecutors directly. She said she has reminded justice officials of general prosecution guidelines but also reminded them to consider factors unique to the COVID-19 cases. She has both suggested the conversations are ongoing and suggested they have ended.

Smith has been sharply critical of COVID-19 masking, gathering and vaccine mandate rules, questioning if they were needed to fight the pandemic and labelling them intolerable violations of personal freedoms, which contributed to job loss, social unrest and mental health.

She has called those unvaccinated against COVID-19 the most discriminated group she has seen in her lifetime.

Shortly after becoming premier in October, she promised to seek amnesties and pardons for COVID-19 rule violators but recently said she won’t, noting that premiers do not have the authority.

She has said the charges were grounded in politics and therefore should be open to political solutions.

The premier admitted on a podcast last week it is “a bit frustrating” for politicians to not be allowed to intervene once charges are laid, but says that is how it has to be.

If there is a review, it would be the second such investigation under the UCP government.

Last February, a third-party report by a retired judge concluded that then-UCP justice minister Kaycee Madu tried to interfere in the administration of justice when he called Edmonton’s police chief to discuss a traffic ticket.

Madu was moved to a different portfolio under the premier at the time, Jason Kenney. Madu has since been promoted to deputy premier under Smith.