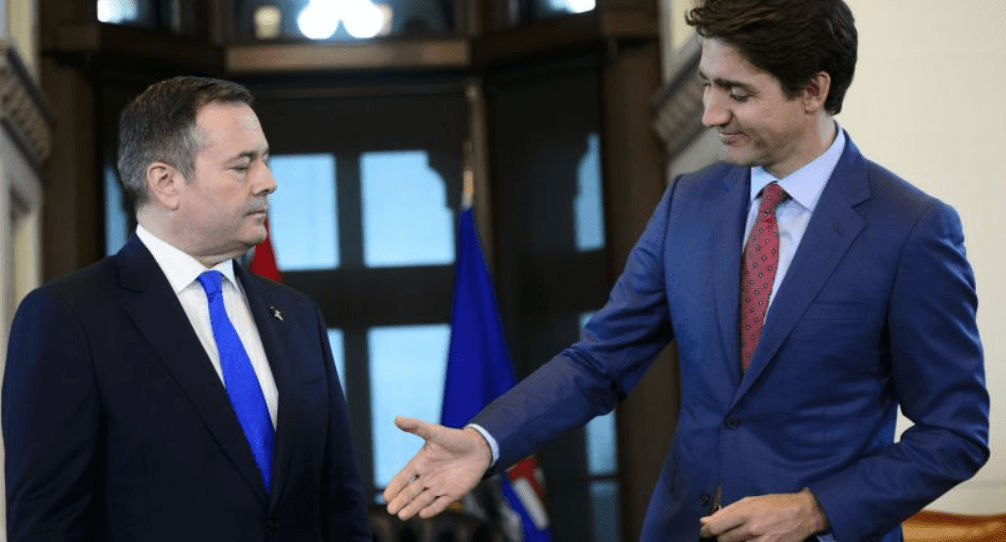 The election is not quite here yet, and already we've been hearing about the doom scenario of some kind of national unity crisis if the Liberals stay in power.  We've had plenty of politicians and pundits decry that the state of Confederation is "hanging by a thread" with this election, and yet, I'm looking to find the genuine grievances rather than overheated rhetoric.  Certain Conservative voices have bemoaned that Alberta's economy isn't somehow front and centre in this campaign, as though there aren't other pressing issues in this country, or that the province and its economy aren't pivotal to the debate over climate change.  Nevertheless, a bunch of swivel-eyed loons (and a fair number of grifters) are trying to use the threat of Alberta separatism as a cudgel to warn against Trudeau remaining in office, but is this really a threat we should take seriously?

Amidst these threats, we've also seen a number of big and small-c conservative voices sigh wistfully about the supposed golden age of national unity under Stephen Harper, when he caved to a bunch of Quebec's demands (remember the "fiscal imbalance" that didn't exist, but they cut a cheque anyway so that Jean Charest could give Quebeckers a tax cut?) and refused to engage with premiers as a collective so that they couldn't gang up on him.  Apparently, that was harmony.  He certainly did Alberta no favours, with an inability to get traction on any pipeline project to tidewater, not securing American cooperation on Keystone XL, not properly consulting with First Nations on Northern Gateway (and the Federal Court of Appeal did point the finger directly at the federal government), and his being on course to do the very same again with Trans Mountain.  His government's decision to change the taxes to income trusts hurt the oil patch, as did his blocking oil sands company takeovers by Chinese companies.  His gutting of environmental legislation only meant projects were now subjected to protracted litigation.  But this was the "golden age."

And what is tearing the country apart?  Insisting on a federal price on carbon, apparently, because ensuring a level playing field so that one province couldn't disadvantage the others by creating a race to the bottom by maintaining a lower price sure was a recipe for division.  The court challenges around the federal carbon price being imposed on provinces who have not lived up to their national obligations have been losing propositions for those provincial governments, and you can be sure that they're going to lose at the Supreme Court of Canada in the New Year when the Saskatchewan and Ontario cases get heard there.  (Funnily enough, Ford's rhetoric that Ontario has done more than its fair share and that other provinces need to step up is pretty much an attack on Alberta, so well done there, conservative solidarity).

So what is left for the threats facing the unity of this country?  Jason Kenney and Scott Moe might tell you it's equalization, but that again is based on a number of falsehoods about how equalization works not to mention the fact that Kenney himself was at the Cabinet table when the current formula was finalized and he endorsed it then, and that 2007 formula wound up giving more money to Quebec and turned Ontario into a "have-not" province (marginally).  Kenney has found great utility in framing it as though the province cuts a cheque to Ottawa, who then turns it over to Quebec, when in fact it comes out of federal income tax paid by all Canadians, and Albertans have the highest incomes by far, meaning they pay more federal income tax.  That money is given to provinces with less fiscal capacity when it comes to delivering similar levels of public services.  Quebec's share may look large, but the amount on a per capita basis is very low, and they have some of the highest taxes in the country (unlike Alberta, which has the lowest because they chose instead to pay for services using non-renewable resource revenues).  The talk about including resource revenues in the calculation would just wind up with Quebec getting even more equalization, and the proposal that Scott Moe put forward about "reforming" equalization would simply be handing out money to all provinces and wouldn't be equalization at all.

Accusations that other provinces are blocking Alberta's main export is overblown because interprovincial pipelines are federal jurisdiction, and Quebec's objections didn't kill Energy East simple economics did.  Anytime Andrew Scheer or anyone else brings up a plan to revive the project, the irony that they would be reviving a National Energy Program that would see Alberta taking a $10/barrel discount to feed Eastern refineries is too rich to ignore.  Funnily enough, the constant talk about Energy East (which, I repeat, is never going to happen) is one of the things that some pundits say has led to a revival of the Bloc in Quebec, because they feel like they are being attacked by other provinces (mostly Alberta) who want to impose pipelines on them.

Jason Kenney's other bugaboos federal bills like the BC north coast tanker ban and the federal environmental assessment reform are hyperbolic nonsense, given that there was no project that the tanker ban would affect (seriously, Northern Gateway isn't coming back) and that we've already established that Harper's gutted environmental assessment framework only resulted in more litigation whereas this new process is aimed at creating a more streamlined process.  They are not attacks on the province, while the federal Liberals have bent over backwards to appease Alberta's concerns with buying the Trans Mountain pipeline to ensure that its expansion goes ahead, and shovelling money into province as "stabilization funds" during their oil-price-crash recession, for no credit.

If there's a threat to national unity, it's coming from a premier Kenney who has only offered a suite of lies and snake oil promises aimed at keeping his voter base angry at someone other than him, and the federal government is that target, unity implications be damned.  If there is a threat to take seriously, it's that anger being fomented with nowhere to go, and that's on Kenney not Trudeau. 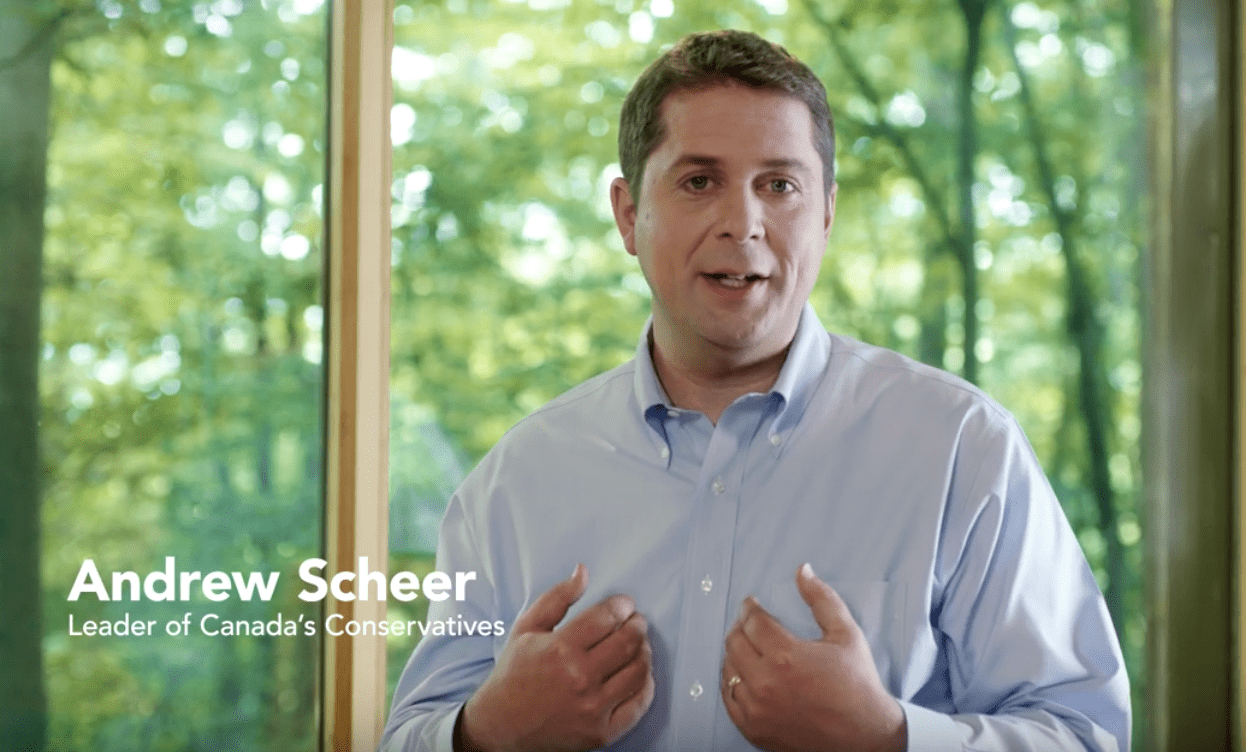 Andrew Scheer ought to be ashamed.

In a recent campaign announcement, Scheer pledged that if elected, a Conservative government under his leadership would slash foreign aid spending by 25 percent.

This was no slip of the tongue.

Scheer reinforced his position in a subsequent tweet, in which he wrote that, "A new Conservative government will help keep more of your hard-earned money.  We won't send billions of your tax dollars in foreign aid to developed countries and foreign dictators.  It's time for you to get ahead."

It was downright disgraceful of him.

But unfortunately, it was hardly surprising.

Ever since Scheer became Conservative leader, he has had a proclivity to flirt with nativist, populist sentiment.  One need only recall his fear-mongering over irregular US-Canada border crossings.  Or his blatant appeal to xenophobic voters through his opposition to the United Nations Global Compact on Migration.

By emulating his rival, People's Party leader Maxime Bernier, Scheer is making clear his electoral calculations.  Whenever he feels his right flank becomes too exposed to Bernier's xenophobia, Scheer pitches his own populism to woo questioning voters back into the Conservative fold.

Scheer appears malleable enough to bend to whatever pressure Bernier levies upon him; principle be dammed.

His foreign aid announcement was simply more of the same-old, same-old.

It is not just Scheer's nativist pitch which deserves condemnation, but also his proclivity for half-truths and lies while doing so.

For instance, in advocating aid cuts, Scheer is leading Canadians to believe that the government has been overspending on its aid commitments.

He is, of course, entitled to his own opinion on the matter.

But it too must be countered, because any notion that Canada is an extravagant spender on aid is simply not true.  And the data proves it.

In 1970, the United Nations adopted the recommended benchmark of at least 0.7 percent of a country's Gross National Income (GNI) to be spent on Official Development Assistance (ODA).  While countries such as Denmark, Norway, Sweden and the United Kingdom have all admirably reached this target, Canada has only ever been a laggard.

Under Justin's father, Pierre Trudeau, Canadian aid reached its highest levels.  In 1975, Pierre's Liberal government spent a record high (at least in Canada) of 0.54 percent of ODA on GNI.

Alas, such aid spending has only decreased, particularly so once Jean Chretien's became Prime Minister.

It was hardly any better under Stephen Harper.  During his time in government, ODA as a percentage of GNI averaged out at a mere 0.3 percent.

Justin Trudeau loyalists shouldn't get too smug upon hearing such news.

In the four years Justin Trudeau has been Prime Minister, aid was even lower than that of the Harper Conservatives.  In fact, compared to other OECD countries, Canada remains tied in 14th place for its ODA contributions.  It's a poor record for a G7 country.

All Canadian's should blush with embarrassment.

Even with this in mind though, Scheer has no yearning to increase aid spending.  Instead, he has crassly justified spending cuts by asserting that Canadian ODA is squandered through careless allocation.

Yet, as reported by CBC's Jonathan Gatehouse, Scheer's claim that billions are wasted upon wealthy nations or those with repressive regimes, is simply false.

Who needs the truth though, when pedalling lies can often be so effective in guaranteeing electoral support?  Certainly not Scheer.

Even though, as president of the Canadian Association for the Study of International Development, Liam Swiss, has written, cuts to aid contributions will only result in "immunizing fewer children, more mothers dying in childbirth, less potable water, and more refuges suffering in conflict zones."

And both leaders also realize that alleviating poverty across the globe does not have to come at the expense of one's own neighbour.

In particular, Singh captured this sentiment in a recent tweet: "When Andrew Scheer talks about cutting foreign aid to save money, it's a distraction and it's a weakness.  Right now, 87 of the richest families in Canada have fortunes worth more than 12 million Canadians.  Tax them."

When it comes to international assistance, Singh and May both convey a wisdom and maturity that far exceeds that of their conservative rival.