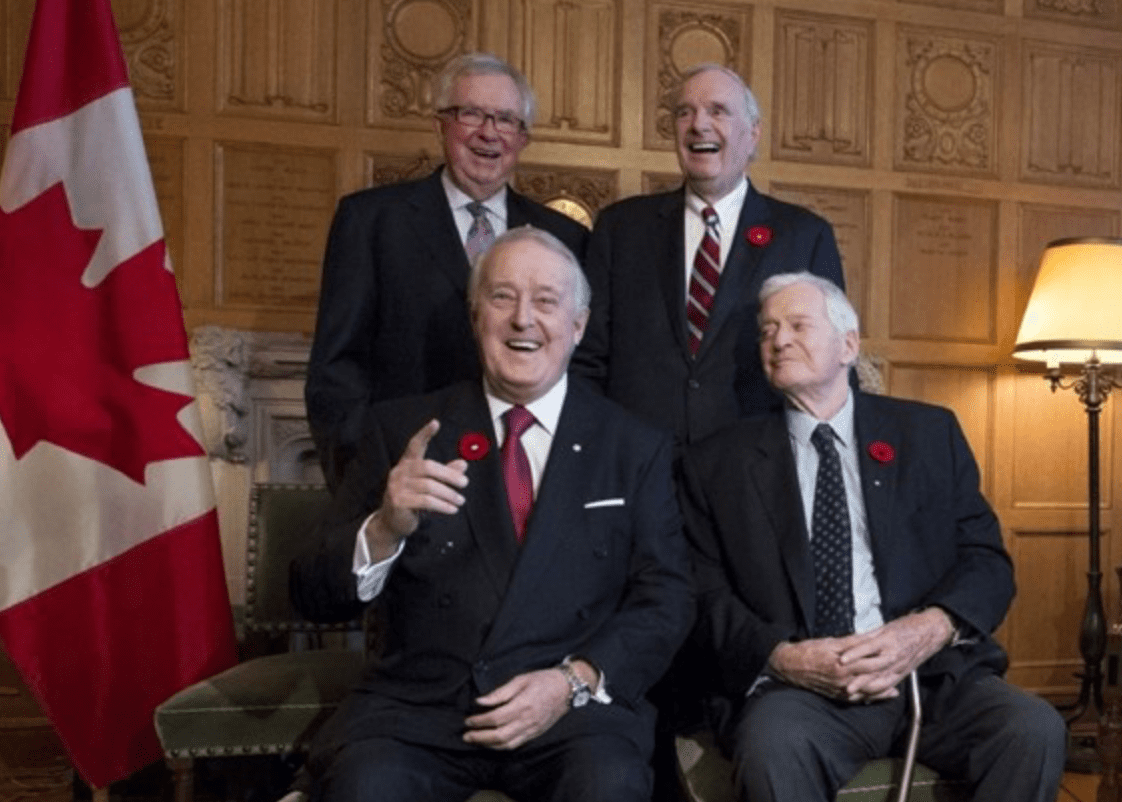 Early last month, news broke that former Prime Minister Joe Clark would be among the delegation assisting the Trudeau government in its efforts to secure Canada a spot on the UN Security Council.

It didn't garner much media commentary.

Neither did the subsequent announcement that another former PM, Jean Chretien, would represent Canada at the recent UN General Assembly.

Perhaps that's to be expected, what with the electorate's attention fastened upon the ongoing federal election campaign.

Nonetheless though, the return of both former prime ministers represents an important development within Canadian politics, and one Justin Trudeau can take credit for helping establish.

After all, it is not just Joe Clark and Jean Chretien who have been recruited.

In 2016, Kim Campbell, was brought in to chair the new Supreme Court advisory board.  And during the perilous and taut negotiations over NAFTA, Brian Mulroney admirably offered up his trade knowledge and advice on dealing with the mercurial Donald Trump; much to the great relief of Justin Trudeau.

Recruiting these former PMs, three of which are Progressive Conservatives, has been both effective and wise.

And it's a practice that should continue, irrespective of which party succeeds in forming government in the coming weeks.

For starters, there are now seven living former prime ministers more than ever in Canadian history.  Besides those mentioned above, the list includes the Right Honorable John Turner, Paul Martin and Stephen Harper.

These former Heads of Government offer a range of knowledge from their time in office that is to the benefit of any political leader willing to listen; especially when the country is contending with several pressing issues of national importance.

For instance, the past few years have witnessed a noticeable rise in nativist, anti-immigrant, anti-refugee sentiment.

When it comes to fostering acceptance of refugees in Canada, why not engage with Joe Clark over the issue?  What with his experience, successfully resettling thousands of Vietnamese "boat people", there are few others better qualified than he.

Speaking of qualified, why not consider reaching out to Paul Martin when it comes to addressing indigenous inequalities?  His dedication to reconciliation post-politics makes him an enviable source of wisdom on the issue.

Or for democratic reform, why not corroborate with long term parliamentarian John Turner?

Or, in the case of a future economic recession, who better to consult with than the man who governed through one, Stephen Harper?

Of course, sometimes former prime ministers really are best left on the sidelines.

Jean Chretien made that much clear this summer, after his foolish musings over the extradition of Meng Wanzhou.  Thankfully, the rumors that Chretien would be sent to China as part of a delegation to free the two detained Canadians, Michael Kovrig and Michael Spavor, have all but been extinguished.

Still, it's important to remember that all former prime ministers are far too useful to be sent out to political pasture.  Or to be merely used as a Liberal or Conservative campaign prop.

Besides, the current troupe of federal party leaders could use all the policy advice they can get.

Justin Trudeau, Andrew Scheer and Jagmeet Singh are all some of the youngest leaders heading a political party in Canadian history.

Despite his four years as Prime Minister, Justin Trudeau is a mere 47 years old.  And Andrew Scheer and Jagmeet Singh are even younger, both at 40 years of age, respectively.

And it is not just age either.

Neither Jagmeet Singh nor Elizabeth May have sat in a federal cabinet.  And while Andrew Scheer has served as Speaker of the House, he too is green around the ears when it comes to managerial government experience.

Heck, judging by the lengthy list of mistakes made by Justin Trudeau over the past few years, he too could benefit from some more council from his political elders.

Finally, it is not just political leaders, but Canadian democracy itself, which can benefit from such multi-partisan cooperation.

Just the sight of former prime ministers aiding their successors, regardless of political stripes, will help to reduce the rising tide of hyper-partisanship that slowly corrodes away at our country's democratic institutions.

Regardless of which party leader forms government on October 21, let's hope a consensus remains over the Trudeau government's efforts to engage with former prime ministers.

After all, such a consensus really is to the benefit of our democracy.

Watching the coverage of the ongoing Canadian federal election is a lot like watching some sort of crazy pinball machine.

The media's attention has been wildly and unpredictably ricocheting from one oddball story to another.

And while this has produced lots of distracting background noise, and maybe even a little entertainment, it really hasn't provided much in the way of edifying content for Canadian voters in terms of policy.

To show you what I mean here's a by no means exhaustive list of issues which have received the media's rapt attention:

And we still have two weeks to go.

Maybe the next big issue to arise will come when it's discovered that in 1997 NDP leader Jagmeet Singh failed to properly tip his waiter.

Now don't get me wrong here, I'm not saying all these various stories aren't important or don't matter to some degree, but, let's face it, none of them have anything to do with what should be front and centre during an election, i.e. comparing and contrasting the policies of each of the various political parties .

We're just not hearing a lot about that stuff.

Of course, there's nothing new about this; during elections the media typically focuses on issues which, in the grand scheme of things, often seem trivial.

Remember, for instance, how the media went into meltdown mode in the last election when then Prime Minister Stephen Harper used the term "old stock Canadians"?

Well I have a theory; in my view what we're witnessing is a convergence of factors which has created the kind of environment where salacious political stories will thrive like mosquitoes in a blood bank.

First off, you have an extremely tight race between the Liberals and Conservatives, two parties which â€” and this is the important part â€” are ideologically and policy-wise not too much different from each other.

Under such conditions, it's only natural that the media will focus its attention on non-policy stuff, since what else is there?

The second thing that's worsening the problem is the laziness of political parties; rather than doing the hard work required to make a case for their respective policy agendas, they'd prefer to satisfy the media's unquenchable appetite for gossipy red meat.

But this inevitably leads to an escalating warfare of inanity.

When Scheer takes a shot at Trudeau for having two campaign jets, the Liberals respond by saying, "We'll see your two jets, and raise you a dual-citizenship".

And the final ingredient which is fanning the flames of absurdity in this election is social media.

In this social media age, political parties, the media and partisans now have the power to amplify the stupidest of issues to a deafening degree, at least, within their own respective echo chambers.

The end result of all this, is a perpetual cycle of "Gotchas"

And if you think this is a bad way to run an election, well I'm sorry it isn't going to get better anytime soon.

The media will always be the media, political parties are trending towards promoting personality over policy and social media is here to stay.

So what does this mean for the future?

Well, it means you better get used to watching political pinball.