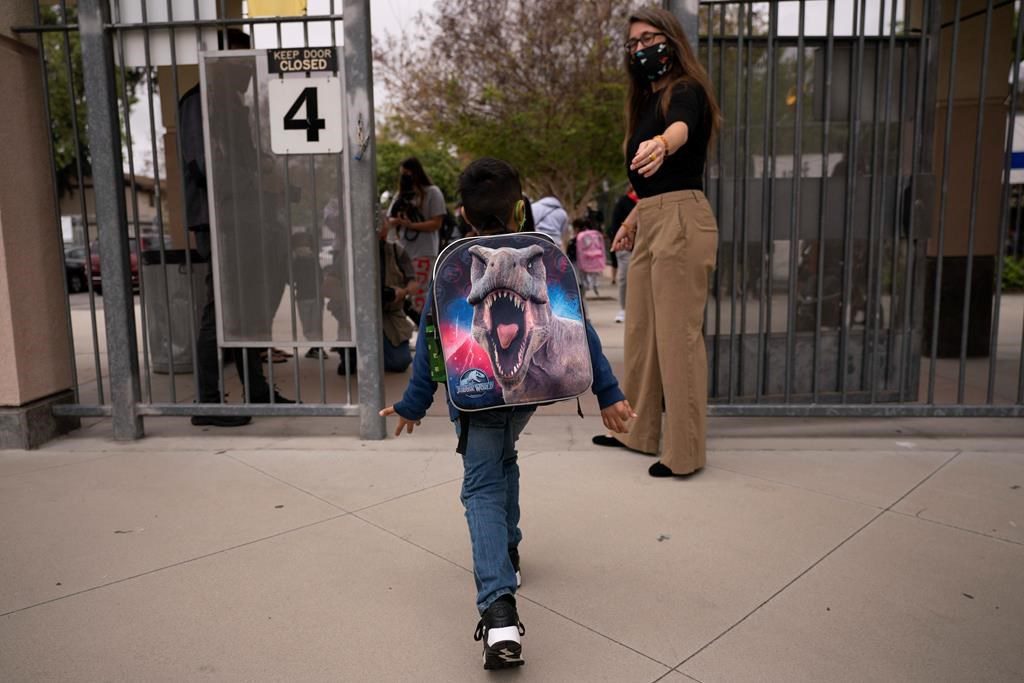 SAN FRANCISCO â€” Frustrated parents in San Francisco have coined a new phrase for their latest classroom reality: "Zoom in a Room.” In Los Angeles, students can start going back to school in person, but more than half say they will stick with distance learning.

More than a year after the coronavirus pandemic forced California’s classrooms to close, some of the largest school districts are welcoming back students this week. But the most populated state is lagging the rest of the country â€” and in some cases offering options that parents say are unacceptable.

Kira Gaber said she’s been told to send her kindergartner back to his San Francisco classroom with a laptop and headphones â€” aka Zoom in a Room. His teacher will be working online from home, while an adult monitor watches the kids in class.

"How is this OK? This is completely not in-person learning," said Gaber, who doesn’t plan to send her son to class with a computer. "I'm going to send him with worksheets and a coloring book."

Reopening schools varies city to city because of California’s decentralized education system, where 1,200 school districts must negotiate new contracts with workers. While educators were among the first groups eligible for vaccines, some districts have let them keep working from home if they or someone they live with is at increased risk from COVID-19.

Across the U.S., what it means to be back in school looks very different from one state to the next. New York City, the nation’s largest school district, allowed students to return last fall, but the Department of Education expects just one-third of its 960,000 K-12 students in classrooms by month’s end.

As of March 29, more than 40% of districts nationwide had offered all students the option to return to full-time in-person instruction, according to the Return to Learn Tracker, developed in part by the conservative American Enterprise Institute.

California ranks last in the country, according to Burbio, a company that monitors some 1,200 school districts, including the largest 200 in the country.

An analysis by the Los Angeles Times found that just 3 million of California's 6.2 million K-12 students now have the option to learn in a classroom, and most are younger children. Even in schools offering an in-person return, some kids will receive only a few hours a week of classroom instruction.

But not California. Gov. Gavin Newsom has pushed to reopen schools by prioritizing vaccines for educators and dangling financial incentives, but he’s made it clear he will not order classrooms to open. On Wednesday, he again pleaded for schools to broadly reopen, saying he’s responded to teachers’ demands.

Teachers unions have outsized political power in the Democratic-led state, and Newsom is expected to face a recall election partly over his handling of the pandemic. Last week, the Democratic governor said California plans to lift nearly all pandemic restrictions by June 15.

"There will be no barrier to having our kids back in in-person instruction," he said. "That is our expectation."

But most students will be on summer vacation by then.

Advocates of reopening argue that online learning exacerbates the achievement gap between poor and minority students and their white and Asian peers. Many private schools and some smaller California school districts have been open for months.

But the students at risk of falling behind are not necessarily the ones clamouring to return.

In Los Angeles, where about 80% of the 600,000 K-12 students qualify for free or reduced-price lunch and one in five is an English learner, Superintendent Austin Beutner said a survey indicated that parents in communities hardest hit by the pandemic were more reluctant to send their children to school.

"Our challenge is convincing families that schools are safe," Beutner said recently.

Nearly three-quarters of families surveyed in San Diego said they preferred a mix of in-person and remote learning, rather than online. Parents of white students expressed the most enthusiasm for in-person instruction, and those of Asian students the least.

Unlike San Diego, LA and other larger districts, San Francisco has no timetable for middle and high school students to return this academic year. The city, which has had some of the lowest infection and death rates in the country, took the remarkable step in February of suing its own school district to reopen classrooms.

While districts in other states have had to hire classroom monitors to oversee children as educators teach from home, the prospect of "Zoom in a Room” sent many of San Francisco’s already frustrated parents over the edge. Officials said almost 300 staffers have permission to work remotely.

"I'm sending my kid because she misses her friends. If not, I wouldn't even bother because this is a joke,” said Robin Herman, whose daughter's fourth-grade teacher will be dialing in.

One of the challenges in planning, educators say, is that California keeps changing the rules.

Until recently, schools were told to space students 6 feet (2 metres) apart, then it changed to 3 feet (1 metre), allowing more students to squeeze into a classroom but requiring new negotiations with teachers unions. Educators wonder what might change with Newsom’s June 15 reopening push.

Santa Ana Unified, a district with about 45,000 students in Orange County, has decided to finish the school year online.

Parents like Lucinda SolÃ³rzano, a mother of three students in the district, are pleading for classrooms to reopen. She says parents weren't given a choice, despite falling infection rates and increasing vaccinations.

"They don't know what it is to have a child who's given up," SolÃ³rzano said.