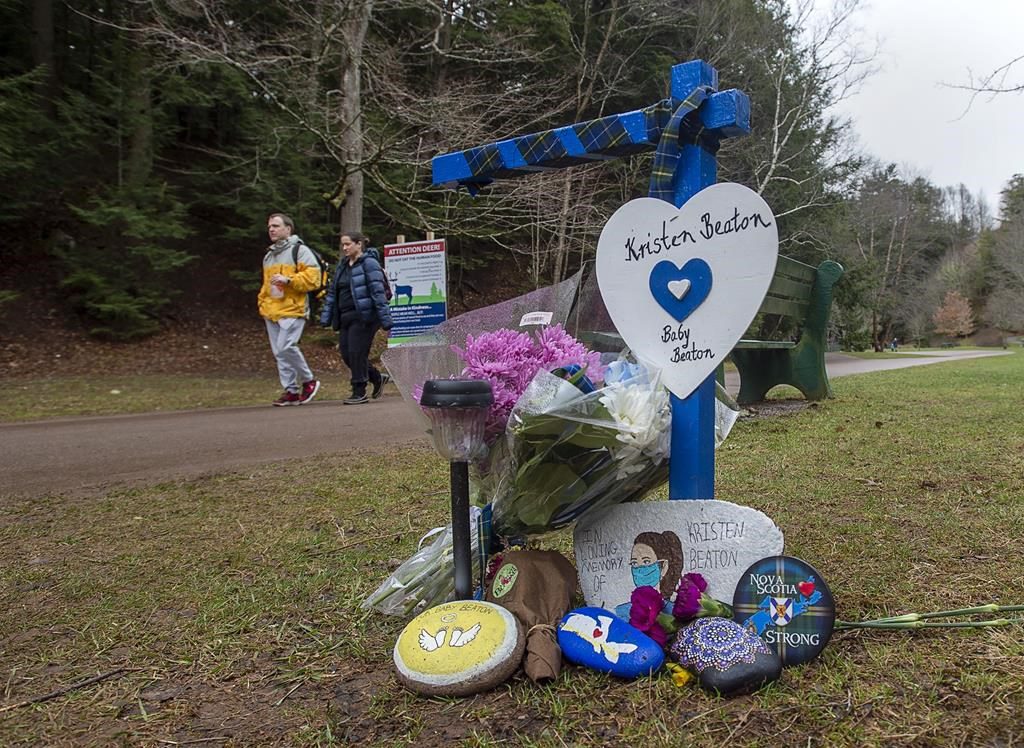 TRURO, N.S. â€” A lone bagpiper played slow airs outside a church Sunday as relatives of 22 people slain during a killer’s rampage in rural Nova Scotia gathered for an emotional ceremony to honour the victims one year later.

The sombre event at First United Church in Truro, N.S., which was livestreamed in lieu of being open to the public, began with a provincewide moment of silence.

Prime Minister Justin Trudeau shared remarks through a pre-recorded statement, saying he wished he could have attended the service.

“Even a year later, I know there is no comfort for the anguish of having an adored parent or precious child torn away,” he said, standing in front of a row of Canadian flags. “So all I can say is this: You are not alone. All Canadians stand with you and grieve with you.”

The prime minister described one of the worst mass shootings in Canadian history as an act of evil that should not define the memories of those lost on April 18 and 19, 2020.

“It will not define the communities that still grieve them,” he said. “Instead, we will remember the kindness and joy of each person taken from us.”

At the front of the church was a blue platform, upon which painted rocks displayed a single rose and the first name of each victim. At one point, relatives placed flowers next to each stone as each victim’s name was read aloud.

Nova Scotia Premier Iain Rankin told the 60-member congregation it was important for those experiencing great loss to come together and seek strength from their community.

“As you and our communities continue on the journey of healing, my hope is that you’ll be strengthened by the continued outpouring of support from Nova Scotians and people throughout the world,” he said.

The hour-long service was organized by a committee of the Nova Scotia Remembers Legacy Society, led by Jenny Kierstead, the sister of Lisa McCully â€” a neighbour of the gunman who was among the first killed on the night of April 18.

“We have all suffered so much this year that it is our intention to bring some light and beauty to our lives on this dark day,” she said in a pre-recorded statement.

“What we know is that a trauma such as the one that we’ve endured can shatter a person’s life. I know it has mine. May this ceremony help you hear the whisper of your own heart, calling you back home to the love, peace and the wholeness that resides within.”

Earlier in the day, hundreds of people took part in a series of memorial walks and runs in and around Truro.

The atmosphere in Victoria Park, where the races ended, was one of both sad reflection and optimism, as the crowd cheered and clapped for the runners crossing the finish line — many with reddened eyes. Money raised from those events will help pay for a permanent memorial, the plans for which are still in the early stages.

Denise Burgess, one of the organizers, said the events were aimed at healing and remembrance.

“We want to turn the lens away from what happened to who these people were,” she said in an interview Sunday. “It gives us a chance to reflect on their lives â€” that they were full, beautiful lives and they were wonderful, giving people who contributed to our community.”

A large art installation in the park pays tribute to the victims. Crafted by welder Wayne Smith, the statue features hearts with the name of each victim, including an unborn child.

“There’s a bit of healing that takes place when we can make this for people,” said Burgess, a teacher in Truro whose students once included Emily Tuck, a 17-year-old Grade 12 student who was killed with her parents in Portapique on April 18.

Willa Kray, who travelled to Truro from Pictou County, said the memorial walk helped her grapple with the anniversary of the mass shooting.

“It was just so horrific,” she said. “I wanted to come here to pay my respects and it did give me a sense of closure.”

The anniversary was also marked by a peaceful march to the RCMP detachment in nearby Bible Hill, where some protesters expressed their dismay with the Mounties’ response to one of the worst mass killings in Canadian history.

Tara Long, the sister of Aaron Tuck, one of the victims, said she's still struggling to understand how someone could go on a shooting spree for 13 hours.

"Our province and our country is sad because this shouldn’t be able to happen here," she said before the march began under darkening skies.

Sarah Jollimore, whose family was close with one of the victims, said she attended the march to remember the lives lost and to call for transparency from the police.

"There's still so many unanswered questions that we all deserve to know," she said. "We need to work better and do better and just be better."

“We understand people have questions and want to know as much as possible about the incidents,” Bergerman said in a statement on Sunday, adding that a federal-provincial public inquiry will provide some answers.

“It is our hope that the Mass Casualty Commission will provide a full accounting of what happened for the families of the victims and the public.”

The Mounties have confirmed that on the night of April 18, 2020, the killer assaulted his common-law spouse, set fire to several homes and proceeded to kill 13 people in Portapique, N.S., a rural community on the north shore of the Bay of Fundy.

Dressed as a Mountie and driving a car he modified to look exactly like an RCMP cruiser, the killer evaded police by driving through a field shortly after officers arrived at the chaotic scene some time after 10 p.m.

Having spent the night hiding at the rear of a welding shop in Debert, N.S., the killer resumed murdering people he knew and others at random early the next day. He was fatally shot by two Mounties at a gas station about 35 kilometres north of Halifax.

The Enfield Big Stop had its jumbo Canadian flag lowered to half-mast Sunday, a reminder of the gruesome events that unfolded there a year ago.

Speculation about the killer’s motives has included evidence he was paranoid about the impact of the COVID-19 pandemic, saying at one point in an email he was glad he was well-armed because the pandemic would make people desperate “once the money runs out.”

As well, the RCMP have said a behavioural analysis revealed he was likely an “injustice collector,” whose grudges built up over time and eventually exploded in horrific violence.

The killer’s propensity for violence was well known among some of his neighbours in Portapique, who have said he had a long history of abusing his common-law spouse. She survived the mayhem in Portapique.

â€” With files from Michael MacDonald in Halifax