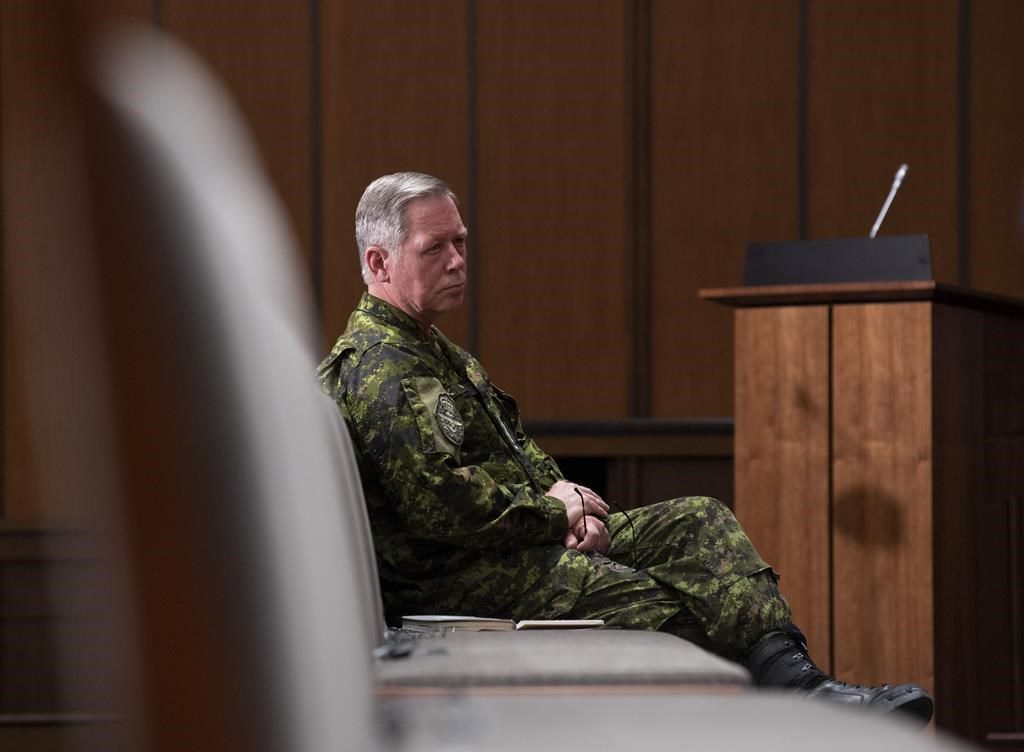 OTTAWA â€” The woman at the heart of sexual misconduct allegations against Canada’s former top military commander says retired Gen. Jonathan Vance believes he owns the military police that are investigating him.

Maj. Kellie Brennan told a House of Commons committee Thursday that the former chief of the defence staff believes he is “untouchable.”

During bombshell testimony to the status of women committee, Brennan revealed that Vance fathered two children with her but has taken no responsibility for them.

She also said she has provided physical evidence of Vance’s inappropriate relationship with her to the Canadian Forces National Investigation Service (CFNIS). That includes, she said, audio recordings of Vance allegedly instructing her to lie about their relationship and threatening consequences if she didn’t.

Despite that, she said she doesn’t expect justice to be done in her case.

“I asked bluntly the CFNIS if they had the mandate to investigate and did they have the powers to lay charges and they would not answer me,” Brennan testified.

“The answer was no because, as (Vance) told me, he was untouchable, he owned the CFNIS.”

Brennan added: “I definitely feel that there will not be justice for me and, in all honesty, that’s OK because if my speaking out can change everything for other women to come forward and change our policies, that’s OK with me.”

Brennan said she was questioned by the military police service for two days, six hours at a time, in February about her relationship with Vance.

She has told Global News that she had a sexual relationship with Vance starting in 2001 that continued after he became her superior officer, including after he was named defence chief in 2015.

Vance has not responded to repeated requests for comment from The Canadian Press. He has acknowledged to Global News that he dated Brennan some 20 years ago but has denied any intimate relationship with her while she was under his command.

He is also being investigated for allegedly sending a lewd email to a junior officer before becoming chief of the defence staff.

Military police are also investigating Admiral Art McDonald, who temporarily stepped aside in February about a month after taking over from Vance as chief of the defence staff. The specifics of that allegation have not been revealed, and McDonald has not commented publicly.

Brennan told the committee Thursday that Vance directed her “what to say, what not to say, how to say it, what to exclude, to purge (sic) myself, to lie” to the CFNIS investigators.

Asked if he’d threatened her, she said: “A threat, meaning bodily harm? No … Definitely he gave me very many consequences if I was not following his orders.”

As an example, she said he told her she would be questioned by his wife, a lawyer, “that somehow she was going to come and see me and question me.”

“The consequences were always the same, that I had to stay silent.”

Brennan said she “didn’t have the ability to say no. They were orders.”

It was not clear why she would have taken orders from Vance after he was no longer the top military commander. He officially retired from the military in April.

Brennan said Vance has good reason to believe he’s above the law.

“In my experience, in many different areas, the law does not apply to him,” she said.

“On a personal note, he fathered two children with me. He’s not responsible to pay or to have those children under his responsibility. It’s all up to me … So, I think that it’s just become a habit with him.”

“Oh my goodness,” Conservative MP Leona Alleslev responded. “That must be very tough on you.”

Brennan also suggested that Defence Minister Harjit Sajjan is under Vance’s control. She alleged that Sajjan was a special projects officer at Canadian Forces Base Downsview in Toronto, under Vance’s command, while she was there between January 2006 and the spring of 2008.

“Gen. Vance told me he always had him under control,” Brennan said of Sajjan.

However, Sajjan has testified that he was never posted in Toronto â€” a fact repeated by a spokesman after Brennan’s testimony.

“As the Minister stated in committee, he did not serve in Toronto,” said Todd Lane.

Liberal MP Anita Vandenbeld, Sajjan’s parliamentary secretary, pointed out the discrepancy between Brennan’s testimony and Sajjan’s but did not ask her to explain it.

Sajjan has been under fire for not having done more after then-military ombudsman Gary Walbourne first told him of an allegation of sexual misconduct involving Vance in March 2018.

Sajjan has said he referred the matter to the Privy Council Office, which was stymied in launching an investigation because Walbourne would not reveal the identity of the complainant.