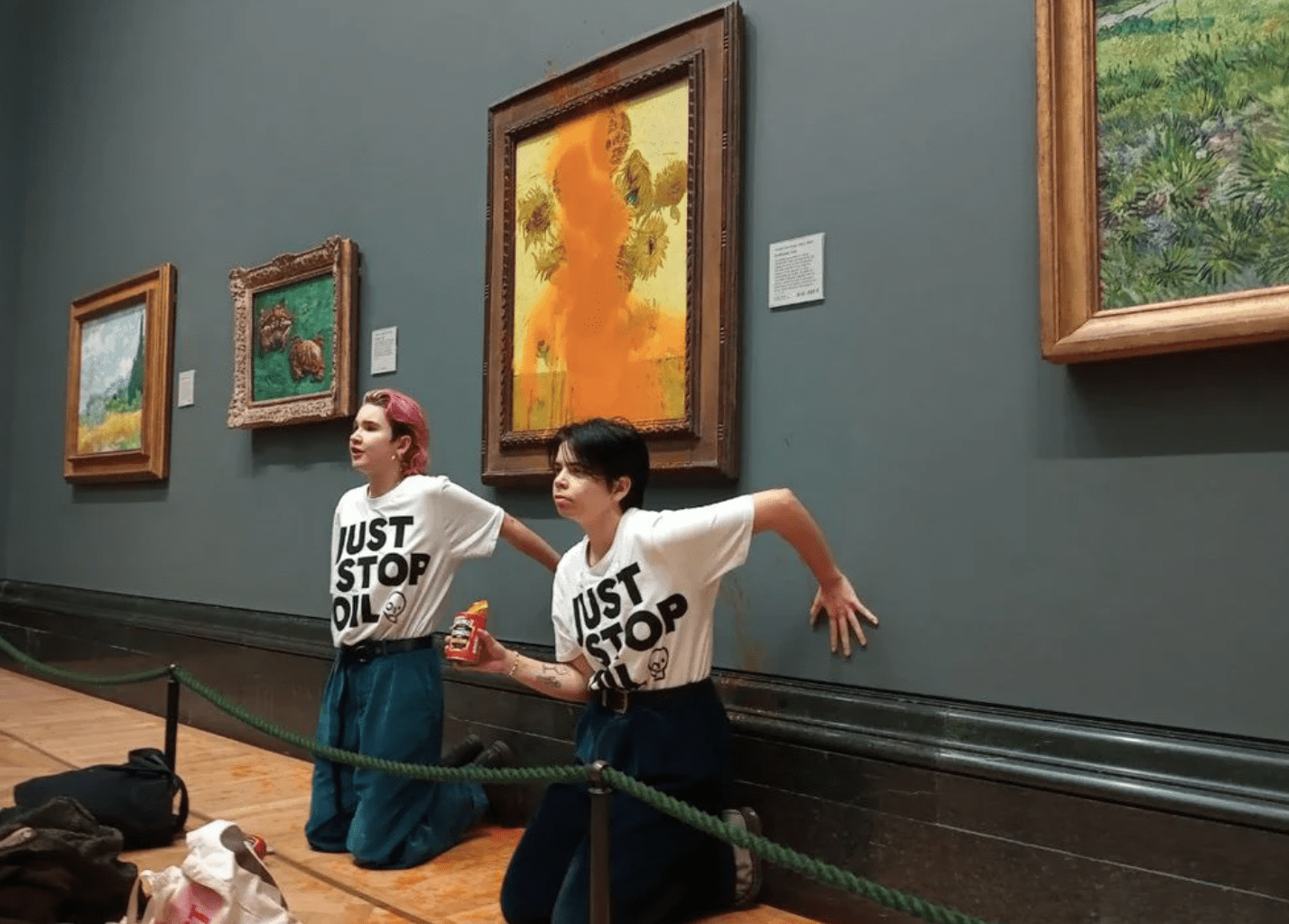 People around the world were stunned to hear about the latest attack on a work of art that resides in a prominent gallery. Most voiced their disapproval of the execution and messaging behind this protest. Few expressed any sympathy for the individuals who may be fined and serve jail time for their actions.

On Oct. 14, two members of a radical left-wing group, Just Stop Oil, threw cans of tomato soup at Vincent van Gogh’s Sunflowers (1888) in the National Gallery in London, UK. They glued their hands on the wall next to this painting in front of several shocked bystanders. Security was immediately called to the scene.

One of the protestors, Phoebe Plummer, made this statement before being arrested. “What is worth more – art or life? Is it worth more than food? Worth more than justice? Are you more concerned about the protection of a painting, or the protection of our planet and people? The cost of living crisis is part of the cost of oil crisis. Fuel is unaffordable to millions of cold, hungry families. They can’t even afford to heat a tin of soup.”

The disgraceful attack on this French Impressionist masterpiece can be viewed here.

Sunflowers has fortunately been covered with a protective glass for years. “There is some minor damage to the frame,” the National Gallery announced in a statement, “but the painting is unharmed.” The frame was quickly repaired, and the painting was back on display within hours.

Most people on the political left and right spoke out forcefully against this disgraceful attack against one of Van Gogh’s famous works. That didn’t stop CTV News from posting an Oct. 15 tweet that linked to Alexandra Moe Jones’s provocative online piece, “Headlines, outrage and art: Climate activists use Van Gogh vandalism to make us question our priorities.” Most of the comments were negative, including my quote tweet which went viral, “Umm…no, they didn’t.”

Individuals and groups have different feelings about environmental issues related to oil, fossil fuels and climate change. That’s never going to change. The attack on Sunflowers, however, was clearly the wrong way to send a message about what some perceive is being done to our planet.

The actions of two foolish, thoughtless and mindless left-wing radicals didn’t change any hearts and minds. If anything, it made most thoughtful individuals angry and frustrated about the lack of respect some hold toward authority, tradition and protecting institutions.

Is this the first time this has ever happened to a piece of art? Hardly, but it’s one of the most well-known and beloved paintings to have been attacked. It’s reminiscent of what’s happened to Leonardo da Vinci’s Mona Lisa (1503) on three separate occasions, the most recent incident occurring in 2009. It’s one of several reasons why this masterpiece is behind plexiglass, and will remain in this state permanently.

It’s also not the first time that Just Stop Oil has attacked a piece of art.

“A van Gogh drenched in soup is the latest and highest profile instance of climate activists tampering with famous works of art to call attention to their cause,” Smithsonian Magazine correspondent Ella Feldman noted on Oct. 17. “In June, Just Stop Oil activists glued themselves to Horatio McCulloch’s My Heart’s in the Highlands at the Kelvingrove Art Gallery and Museum in Glasgow. Since then, members of the group have glued themselves to about half a dozen other artworks. They’ve been mimicked by activists in Italy and Germany, who have targeted works by Sandro Botticelli and Pablo Picasso.”

How on earth did this happen?

I studied at the London School of Economics, and lived in London between 1994-95 as I earned a Master’s degree in comparative politics. This afforded me many opportunities to visit the National Gallery. Security measures were in place at that time, and still existed during my last visit to the UK a few years ago. You can only consume food in the designated restaurants and eating areas, and you certainly can’t bring it into the main gallery.

How were these two screwballs able to take cans of soup past security and make their way to this masterpiece? Gallery officials clearly need to re-examine current security measures because something went seriously wrong.

Meanwhile, the lack of security guards at museums and galleries has become a significant issue in large cities like London. There are times when I’ve walked through sections and rooms that house paintings and sculptures from the Baroque and Renaissance periods (which are less popular with most visitors, sad to say), and there’s no-one on hand to keep a close eye on these priceless works of art. All countries have to learn a lesson from the Sunflowers attack and hire more security guards.

These are some of the new realities that galleries, museums and visitors must now face. We can’t roam as freely in these impressive buildings as we did before. Those days are over, and it will transform the way this generation, and future generations, experience art in-person.

Far left radical groups like Just Stop Oil are completely to blame for this. Their offensive acts of defiance, desecration and destruction of great works of art will have long-lasting repercussions. If Plummer and her cohort, Anna Holland, ultimately go to jail, few will shed any tears or drown their sorrows with tin cans of soup.