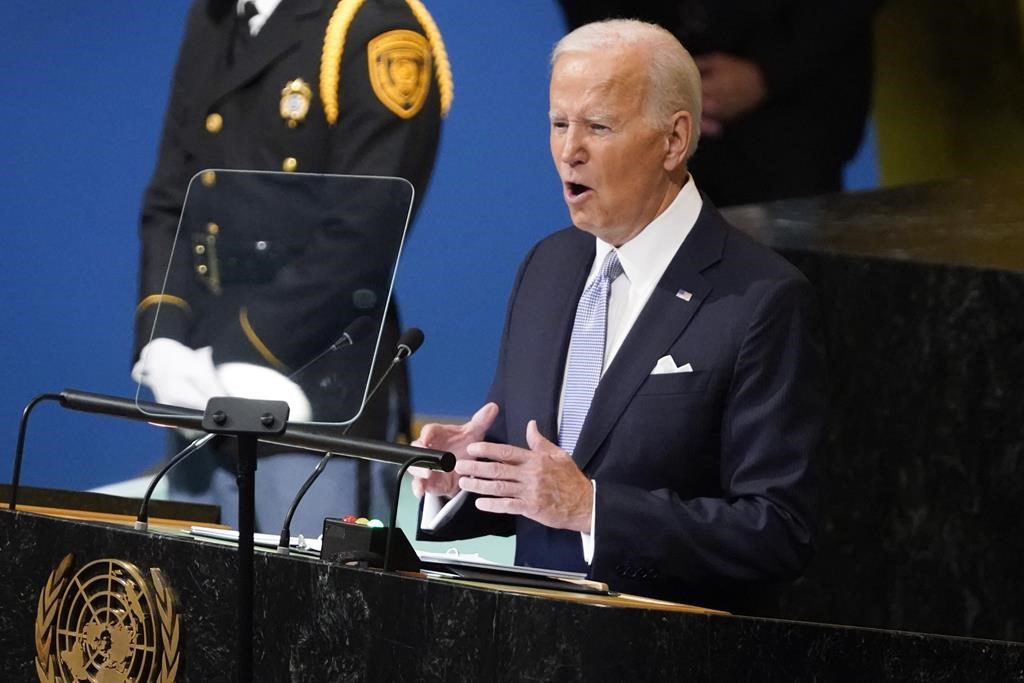 WASHINGTON (AP) — How do American leaders and their allies intend to respond if President Vladimir Putin seeks to escalate his way out of a bad situation on Ukraine’s battlefields, and makes good on renewed threats of annexing territory or even using nuclear weapons?

At least to start with, by trying to double down on the same tactics that have helped put Russia in a corner in Ukraine, U.S. and European leaders have made clear: more financial penalties and international isolation for Russia, more arms and other backing for Ukraine.

That won’t necessarily be easy. It’s been tough enough staying the current course of persuading all of dozens of allies to stick with sanctions and isolation for Putin, and persuading more ambivalent countries to join in. Global financial and energy disruptions from Russia’s war in Ukraine already promise to make the coming winter a tough one for countries that have depended on Russia for their energy needs.

And there’s no sign of U.S. or NATO officials matching Putin’s renewed nuclear threats with the same nuclear bluster, which in itself might raise the risks of escalating the conflict to an unimaginable level. Even if Putin should act on his nuclear threat, President Joe Biden and others point, without details, to an ascending scale of carefully calibrated responses, based on how far Russia goes.

To start with, “they’ll become more of a pariah in the world than they ever have been,” Biden told CBS’ “60 Minutes” just ahead of Putin’s new wartime measures and renewed nuclear threat.

“What they do will determine what response would occur,” Biden said on the nuclear side, adding that the U.S. responses in that case would be “consequential.”

“I do not believe the United States would take an escalatory step” in the event of a one-off, limited nuclear detonation by Russia aimed at trying to scare Ukraine and its supporters off, said Rose Gottemoeller, former deputy NATO secretary-general and former U.S. undersecretary of state for arms control. “Certainly, it would not respond with nuclear weapons.”

Putin this week pledged to use “all available means” to stave off any challenges as Russia moves to summarily claim more Ukrainian territory despite heavy losses on the battlefield to NATO-armed Ukrainian forces. In case NATO missed the point, another senior Russian political figure specified the next day that included nuclear weapons. Putin also mobilized Russian fighters to throw into the seven-month invasion of Ukraine, and announced votes in parts of Ukraine that the West says are meant to provide political cover for illegally absorbing those regions into Russia.

U.S. and European Union officials say new sanctions are in the works in response to Putin’s latest moves.

“Russia, its political leadership, and all those involved in organizing these ‘referenda’ as well as in other violations of international law and international humanitarian law in Ukraine will be held accountable,” EU foreign policy chief Josep Borrell pledged this week, on the sidelines of the U.N. General Assembly in New York.

But political declarations are the easy part. It’s unclear what type of measures can be agreed upon, as the financial punishments against Russia are also increasingly inflicting pain on other European economies weighed down by high electricity and natural gas prices and spiraling inflation. Hungary has led resistance to sanctions that might hit its supplies from Russia, but it isn’t alone in hesitating.

New sanctions may come only after much debate and hand-wringing among the 27 EU member countries in coming weeks, probably only after Russia has held its referendums.

The last round of sanctions over Russia’s invasion of Ukraine was announced May 4, but only agreed on four weeks later, as concerns over oil divided member countries. Rather than a new set of sanctions, a “maintenance and alignment” package was sealed in July, mostly to close loopholes on measures already agreed upon.

Pressed by reporters in New York for details about what might be coming, Borrell said the sanctions would target “new areas of the Russian economy, especially — if I can be a little more concrete — the technological ones.”

Ursula von der Leyen, who heads the EU’s executive branch — the European Commission — which has been responsible for drawing up most of the sanctions, also appeared resolute, but she was hardly more forthcoming.

“We stand ready to impose further economic costs on Russia and on individuals and entities inside and outside of Russia who support (the war), politically or economically. Plus we will propose additional export controls on civilian technology as Russia moves to a full war economy,” she told CNN.

Beyond the economic sanctions, the EU since Russia’s February invasion of Ukraine has slapped asset freezes and travel bans on more than 1,200 Russians, including Putin, Russia’s foreign minister and other senior officials.

Militarily, Secretary-General Jens Stoltenberg said this month that NATO is working with the defense industry to explore ways to boost arms production to better meet Ukraine’s needs and replenish the arsenals of allies who have been providing weapons and defense systems.

“We saw that during the COVID crisis, the industry was able to ramp up production of vaccines and now we need to have, to some extent, the same approach: ramp up quickly production of weapons and ammunition,” he told The Associated Press.

The U.S. as a matter of policy maintains ambiguity about how it would respond to any use of nuclear weapons in the conflict. Such a use would return the world to nuclear war for the first time since the U.S. dropped bombs on Hiroshima and Nagasaki in 1945, and risk escalation on a scale the world has never seen.

But U.S. officials’ public comments on the matter this month are in line with expectations from arms experts that Washington’s response would be a graduated one based on the gravity of Russia’s nuclear use. A one-off and comparatively limited Russian nuclear use would deepen Russia’s isolation internationally, but may not necessarily draw an immediate Western nuclear use in kind.

It’s difficult to fathom Putin launching any central strategic nuclear strike at the United States or its NATO allies, which would be “to commit suicide,” said Gottemoeller, the former deputy NATO secretary-general.

Gottemoeller describes instead a scenario of Putin carrying out a single demonstration strike over the Black Sea or against a Ukrainian military target, in hopes of spiking pressure on Ukraine’s Western-allied government to capitulate.

Internationally, “There would be a very firm response that … would amount to, again redoubling efforts to help the Ukrainians,” and “also in terms of huge condemnation in the international community,” she said.

That condemnation would be sure to draw in countries that so far have declined to break with Russia or stop doing business with it, including China, India and countries of the global south, she said.

For Putin, actual nuclear use would give up all the benefits of simply threatening it, and pile on untold risks for Putin after that, said Lawrence Freedman, emeritus professor of war studies at King’s College London.

“The Chinese and the Indians and others that have not been marked in their condemnation of Russia … would have to speak. The last thing they want is for the precedent of nuclear use to be made,” Freedman said.

“So I think we can we can scare ourselves quite easily by the by the rhetoric he uses. But I think I think it’s best to recognize he does have a purpose, which is working, to stop the West intervening directly,” he said. “To start using nuclear weapons against the West, you have to expect” at least the risk of “nuclear weapons coming back in your direction.”