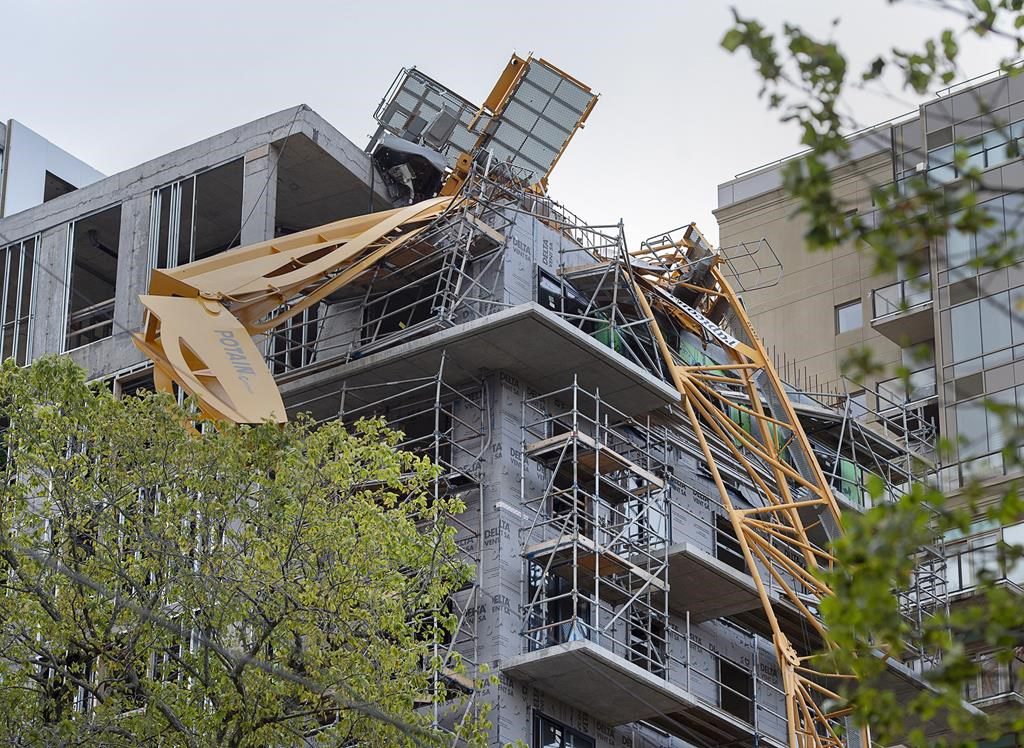 HALIFAX â€” A provincial government study has concluded the collapse of a 68-tonne construction crane in Halifax during post-tropical storm Dorian was the result of a weld failure in the lower portions of the tower.

Nobody was killed or injured when the crane fell during the storm on Sept. 7, 2019.

An engineer’s report included in the document released today concludes the bending occurred in winds gusting up to 107 kilometres per hour, even though the tower was designed to withstand winds of up to 160 km/h.

BMR Structural Engineering determined the failure occurred in a section of the mast between six and nine metres above the base, where a weld failed and a diagonal member of the mast separated from a vertical member.

The report says an analysis of the metal indicated there was corrosion, pores and a crack, along with “other welding defects on welded connections.”

BMR, however, determined the crane was properly prepared for the storm, and that it was set in what’s referred to as “weather vaning mode,” where the crane’s brakes are released and it is allowed to rotate with the direction of the wind in a storm.

The report also says the crane was inspected as required prior to the collapse.

Overall, the investigation determined the tower crane owner and operator met the provincial and Canadian safety standards along with all provincial legislative and regulatory requirements.

“The investigation determined â€¦ the weld failure caused the diagonal tube to separate from the vertical member of the mast, transferring the weight supported by the mast's four vertical posts to only three of its posts, causing the tower section to rotate and fail,” the report concluded.

The Labour Department says in a news release it will meet with all tower crane owners and operators in the province to review the findings of the investigation.

It says operators will be required to ensure all crane masts “be thoroughly cleaned, inspected and tested to identify any defect or deterioration immediately.”

The department says in the study “it will engage industry to develop and implement an industry leading code of practice or standard for enhanced tower crane mast and boom weld inspection, testing, and maintenance in Nova Scotia.”

The provincial government said in November 2019 it would pay $2 million to clean up the collapsed crane and have the area reopened, with the former transportation minister saying the province planned to make efforts to recover the money.

In October 2019, a class-action lawsuit application was launched to recover losses sustained by businesses and tenants.