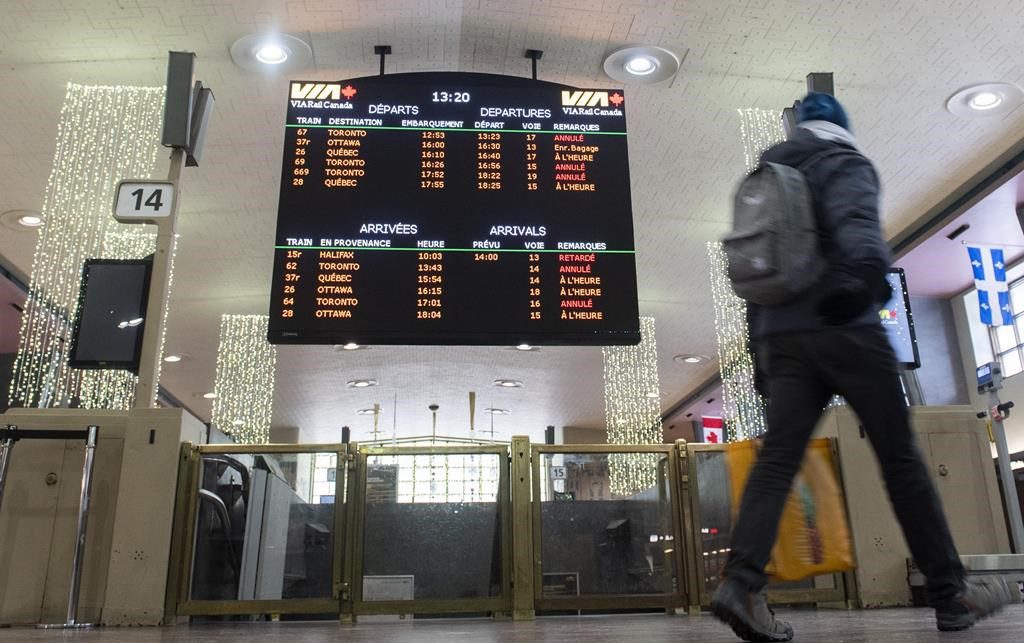 OTTAWA — Via Rail executives are set to address a federal committee today about the delays that plagued travellers over the holidays.

Earlier this month, the Crown corporation apologized for the widespread delays passengers saw between Dec. 23 and 26 as a winter storm swept across Ontario and Quebec.

The railway has said that the derailment of a CN Rail freight train caused further delays to trains on its east-west corridor between Quebec City and Windsor, Ont.

Some passengers found themselves stranded on trains for upwards of 20 hours.

Via Rail apologized for not being more forthcoming with its customers about the situation and providing timely updates on delays.

Its executives are appearing at the committee as Opposition members of Parliament argue it’s time to extend the country’s air passenger protection regulations to cover travel by train.

Transport Minister Omar Alghabra appeared at the committee earlier this month and vowed to toughen up existing rules, which critics argue lack the teeth to hold companies accountable for compensating air passengers.

But in a statement provided to The Canadian Press, Alghabra’s office did not address whether the minister supports calls to expand the existing passenger protection regime to cover those travelling by rail.

“The situation with Via Rail over the holiday season was unacceptable. Passengers deserve to be communicated with, especially during the unprecedented weather conditions Canadians were experiencing,” spokeswoman Nadine Ramadan said in an email.

“The safety of crew and passengers is always a top priority. All options are on the table to strengthen passenger safety even more.”

Via Rail’s appearance follows earlier testimony by leaders at Air Canada, WestJet and Sunwing, who faced questions about the hundreds of flights they cancelled or delayed over the holidays.

Sunwing Airlines came under particular scrutiny after hundreds of passengers were left stranded in Mexico, saying they could not get an answer from the company about returning to Canada. They have all since returned to Canada, and the airline has apologized.

Sunwing faced criticism not long after for cancelling all flights out of Saskatchewan until early February. It has also reduced winter flights out of Moncton, N.B., Fredericton and Halifax.

This report by The Canadian Press was first published Jan. 26, 2023.