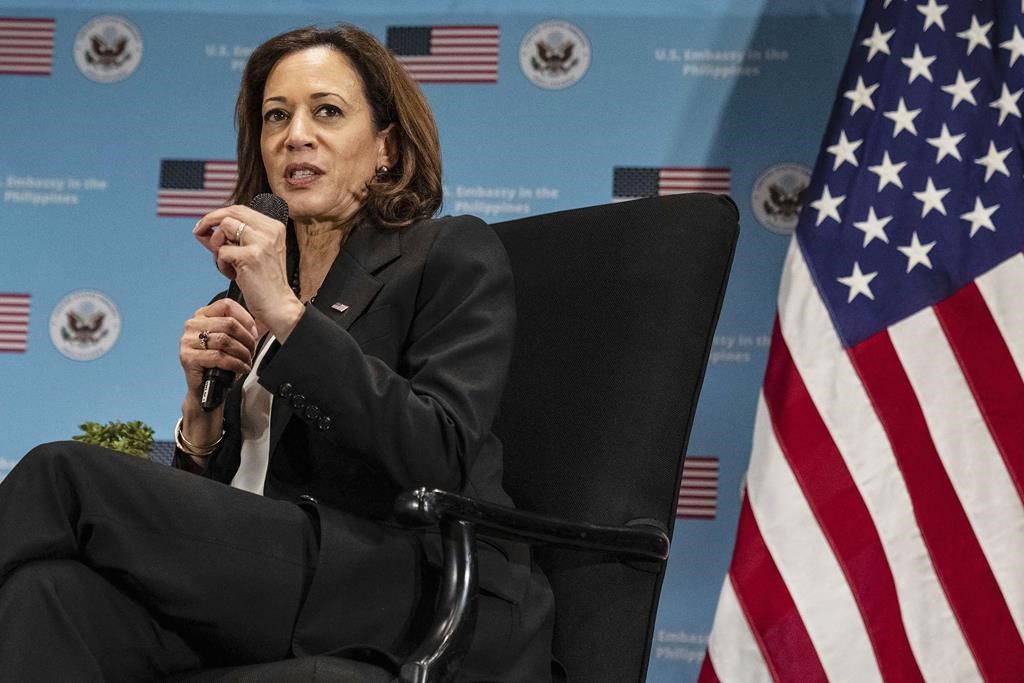 PUERTO PRINCESA, Philippines (AP) — U.S. Vice President Kamala Harris is flying to a western Philippines island province at the edge of the South China Sea on Tuesday to amplify America’s support to its treaty ally and underline U.S. interest in freedom of navigation in the disputed waters, where it has repeatedly chastised China for belligerent actions.

A new confrontation erupted in the contested waterway ahead of her visit when the Philippine navy alleged a Chinese coast guard vessel had forcibly seized Chinese rocket debris as Filipino sailors were towing it to their island.

The long-seething territorial conflicts involving China, the Philippines, Vietnam, Malaysia, Taiwan and Brunei have long been regarded as an Asian flashpoint and a delicate fault line in the U.S.-China rivalry in the region.

In talks with President Ferdinand Marcos Jr. in Manila on Monday, Harris reaffirmed Washington’s commitment to defend the Philippines under the 1951 Mutual Defense Treaty, which obligates the allies to help defend any side which comes under attack.

“An armed attack on the Philippines armed forces, public vessels, or aircraft in the South China Sea would invoke U.S. Mutual Defense commitments,” Harris told Marcos Jr. “And that is an unwavering commitment that we have to the Philippines.”

Marcos Jr. thanked Harris, saying that with the upheavals in the region and beyond, “this partnership becomes even more important.”

In Palawan’s main city of Puerto Princesa, Harris would visit a small fishing community called Tagburos and discuss with impoverished villagers the impact of illegal fishing on their livelihood and promote responsible fishing.

The Philippine coast guard said it would welcome Harris on board one of its biggest patrol ships, the BRP Teresa Magbanua, at a seaport in Puerto Princesa, where she is scheduled to deliver a speech to underscore the importance of international law, freedom of navigation and unimpeded commerce in the South China Sea.

She would announce an additional aid of $7.5 million to Philippine maritime law enforcement agencies to boost their capacity to counter illegal fishing, carry out sea surveillance and help in search and rescue efforts, including in the South China Sea, according to a statement issued by the vice president’s office.

The Philippine coast guard would also get additional U.S. help to upgrade its vessel traffic management system for better safety at sea. The Philippines is also now receiving real-time surveillance data to be able to detect and counter illicit activities at sea in a project by the Quadrilateral Security Dialogue, an informal strategic bloc that involves the U.S., India, Japan and Australia, according to Harris’s office said.

While the U.S. lays no claims to the strategic waterway, where an estimated $5 trillion in global trade transits each year, it has said that freedom of navigation and overflight in the South China Sea is in America’s national interest.

In March, U.S. Indo-Pacific commander Adm. John C. Aquilino told The Associated Press that China has fully militarized at least three of several islands it built in the disputed South China Sea, arming them with anti-ship and anti-aircraft missile systems, laser and jamming equipment in an increasingly aggressive move that threatens all nations operating nearby.

Aquilino spoke with AP onboard a U.S. Navy reconnaissance aircraft that flew near Chinese-held island bases in the South China Sea. During the patrol, the P-8A Poseidon plane was repeatedly warned by Chinese radio callers that it illegally entered what they said was China’s territory and ordered the plane to move away.

In Sunday’s incident in the Spratlys, the most hotly contested area of the South China Sea, Vice Adm. Alberto Carlos, commander of the Philippine military’s Western Command, said a Chinese coast guard ship twice blocked a civilian boat manned by Philippine navy personnel before seizing the debris it was towing off Thitu island.

China denied there was a forcible seizure and said the debris, which it confirmed was from a recent Chinese rocket launch, was handed over by Philippine forces after a “friendly consultation.”

Chinese coast guard ships have blocked Philippine supply boats delivering supplies to Filipino forces in the disputed waters in the past but seizing objects in the possession of another nation’s military constitutes a more brazen act.

China has warned Washington not to meddle in what it calls a purely Asian dispute and has said that U.S. Navy and Air Force patrols and combat exercises in the disputed waters were militarizing the South China Sea.

In July, U.S. Secretary of State Antony Blinken called on China to comply with a 2016 arbitration ruling that invalidated Beijing’s vast territorial claims on historical grounds in the South China Sea.

China has rejected the 2016 decision by an arbitration tribunal set up in The Hague under the U.N. Convention on the Law of the Sea after the Philippine government complained about China’s increasingly aggressive actions in the disputed waters. Beijing did not participate in the arbitration, rejected its ruling as a sham and continues to defy it.