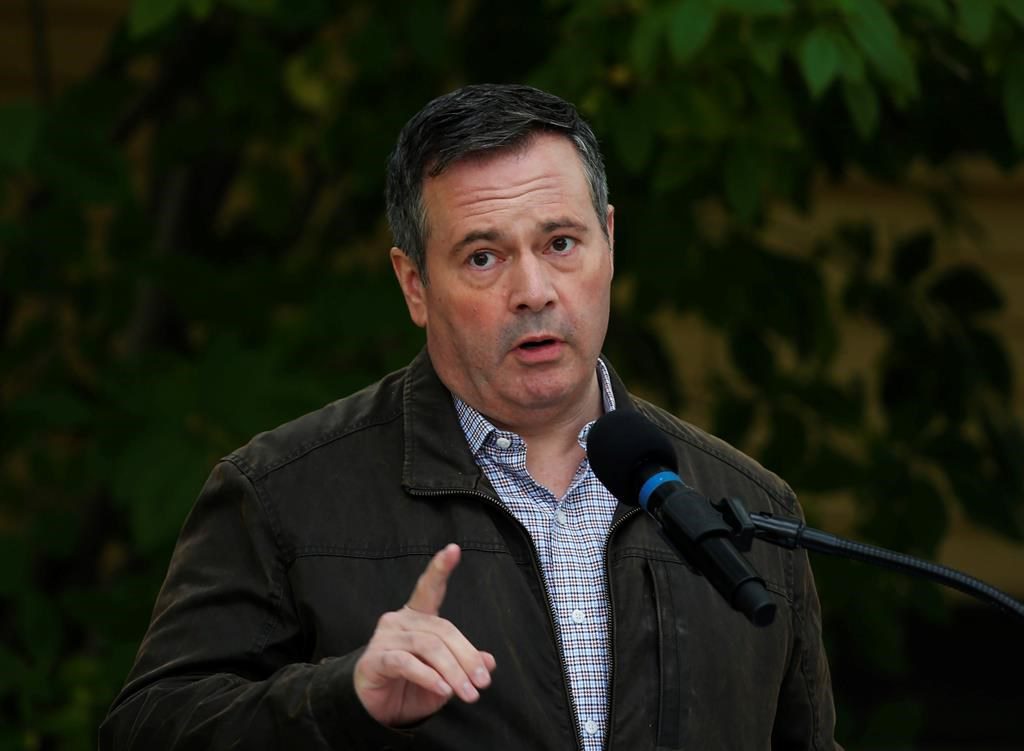 EDMONTON â€” Alberta Premier Jason Kenney is urging the public to hold on a little longer by following COVID-19 restrictions while condemning those using threats and intimidation to protest the rules.

Provincial sheriffs estimated about 750 people gathered at the legislature on Monday to protest public-health restrictions. Some chanted “lock her up” in reference to the province’s chief medical health officer, Dr. Deena Hinshaw.

“They also chanted ‘just say no’ to vaccines,” Kenney later said on Twitter.

“It's particularly offensive to threaten a committed public servant like Dr. Hinshaw, a consummate professional who has offered the best possible health advice to govt. I call on those responsible to stop the threats & law breaking, which is a disservice to their own cause.”

Kenney added that another large protest on Sunday at GraceLife Church west of Edmonton, which was recently closed by health officials for violating restrictions, resulted in the arrest of a protester who allegedly shouted racial insults at a First Nations woman on a nearby reserve.

Kenney said a car belonging to the chief of Enoch Cree Nation was also vandalized.

“Albertans respect the freedoms of speech and protest,” said Kenney.

“But breaking the law, trespassing, threats and intimidation go too far. I condemn these actions and statements. It is increasingly clear that many involved in these protests are unhinged conspiracy theorists.”

Earlier Monday, Kenney held a news conference and asked Albertans to keep following the rules and get vaccinated.

Kenney said the amount of available vaccine is increasing and he expects a quarter of Albertans will have some protection from the novel coronavirus in a matter of weeks.

Half of the population should have at least one shot by the end of May, two-thirds by the end of June and three-quarters by mid-September, he said.

“We’re nearing the end of a long and tiring journey. It is our path to recovery and freedom,” Kenney said.

“Once two-thirds of us have immunity, we’ll start to feel back to normal. There’ll be no formal restrictions. (Calgary) Stampede, sporting events, other festivals will be possible, especially if outdoors.

“Once three-quarters of us are immune, we expect we’ll be fully back to normal.”

Kenney said masks and physical distancing will still be encouraged of Albertans but not mandated.

Mega clinics â€” each able to able to administer up to 1,000 doses per hour and 6,000 per day â€” opened in Calgary and Edmonton on Monday.

Kenney has said vaccine rollout is critical, as the impact of COVID-19 on the province has become a race between the rise of the variants and getting a critical mass of people vaccinated.

The variants, which are more contagious than the original strain, now make up about half of Alberta’s 14,800 active cases.

There were also 390 people in hospital because of the virus and 90 were in intensive care.

“Right now the variants are winning that race,” said Kenney.

He added that socializing among young people remains a concern. A Calgary high school had to shut down recently because students were having house parties.

And in Athabasca, northeast of Edmonton, a number of schools had to be closed because of infections.

“A bunch of kids from one of those schools were brought together by their parents for a birthday party,” Kenney explained.

â€” By Bill Graveland in Calgary