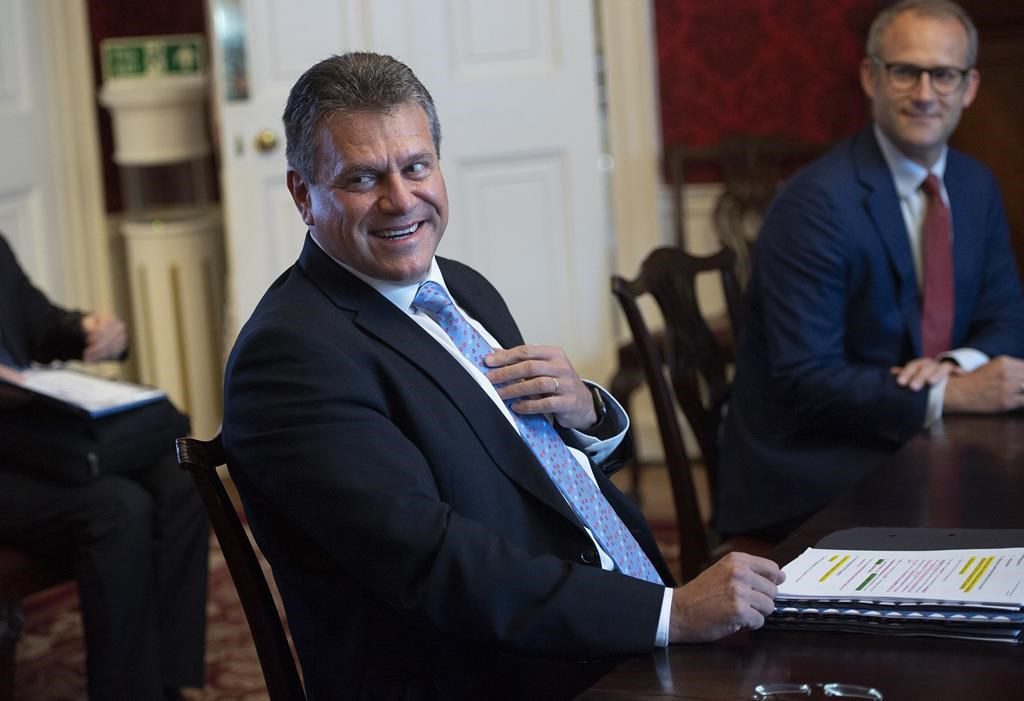 LONDON (AP) — The U.K. is calling on the European Union to show pragmatism and “common sense,” as the two sides meet to resolve differences over the implementation of their post-Brexit trade deal in Northern Ireland.

Britain’s chief official in the talks, David Frost, made the comment after his European Union counterpart said the bloc was ready to act “firmly and resolutely” if the U.K. failed to honor its commitments under the agreement. Frost and EU chief negotiator Maros Sefcovic are meeting Wednesday in London amid rising tensions in Northern Ireland, the only part of the U.K. that shares a land border with the EU.

A part of the trade deal known as the Northern Ireland Protocol was designed to protect the peace process in the region. Many pro-British residents are angry, however, because it creates a regulatory border between Northern Ireland and the rest of the U.K. Newly required border checks have also caused shortages of some products.

Britain is calling for compromise, but the EU says the new rules are needed to protect the bloc’s single market. Both sides fear the tensions could fuel a return to violence in Northern Ireland.

“Further threats of legal action and trade retaliation from the EU won’t make life any easier for the shopper in Strabane who can’t buy their favorite product,” Frost said, referring to a town in Northern Ireland. “What is needed is pragmatism and common sense solutions to resolve the issues as they are before us. This work is important, and it is ever more urgent.”

The 1998 Good Friday Agreement, which brought peace to Northern Ireland, was underpinned by the fact that both the U.K. and the Republic of Ireland were members of the European Union. That made it possible for trade to flow freely between Ireland and Northern Ireland, stimulating economic growth and creating jobs on both sides of the border.

In an effort to keep the border open, the EU and the U.K. agreed that Northern Ireland would remain part of the European single market after Brexit. But that means EU rules on issues such as food safety still apply in Northern Ireland, meaning there have to be checks on some goods shipped into Northern Ireland from other parts of the U.K.

The divorce deal, which took effect Jan. 1, included a number of grace periods that gave Britain time to put in place new systems for checking items coming into Northern Ireland to ensure they complied with EU rules. Those grace periods are now ending, causing headaches in Northern Ireland.

The U.K. angered Brussels earlier this year when it unilaterally extended the grace period covering many supermarket products, delaying the required inspections for six months. The EU has threatened legal action over the decision.

Now, the two sides are sparring over the rules governing chilled meats, raising the specter of what British newspapers are calling a “sausage war.” British officials are considering extending the grace period covering chilled meets to prevent the EU from blocking shipments of products such as sausages and ground beef on July 1.

U.K. Communities Secretary Robert Jenrick told Sky News that the government never imagined the EU would interpret the protocol “in such a rigid and unpragmatic way.”

“The protocol was always about ensuring the free flow of goods between GB and Northern Ireland, as it was between Northern Ireland and the European Union,″ he said. “I hope that we can sort that out, because there are also things even more important than sausages at stake here, for example medicines.”

“If this does not happen, and if the U.K. takes further unilateral action over the coming weeks, the EU will not be shy in reacting swiftly, firmly and resolutely to ensure that the U.K. abides by its international law obligations,” Sefcovic wrote Tuesday in the Telegraph.

While Sefcovic didn’t specify what those actions might be, the Times of London quoted an unidentified EU official as saying the bloc was ready to impose trade sanctions and retaliatory tariffs.

Sefcovic described the Northern Ireland Protocol as an opportunity that will give the region access to more than 500 million customers in both the U.K. and European Union.

But Frost said compromise is needed to make that a reality. The U.K. sent 10 papers to the EU offering solutions to many of the issues that divide the two sides, but received no written responses from the bloc, he said.

“When I meet Maros Sefcovic later today, my message will be clear: Time is short and practical solutions are needed now to make the Protocol work,” Frost said.