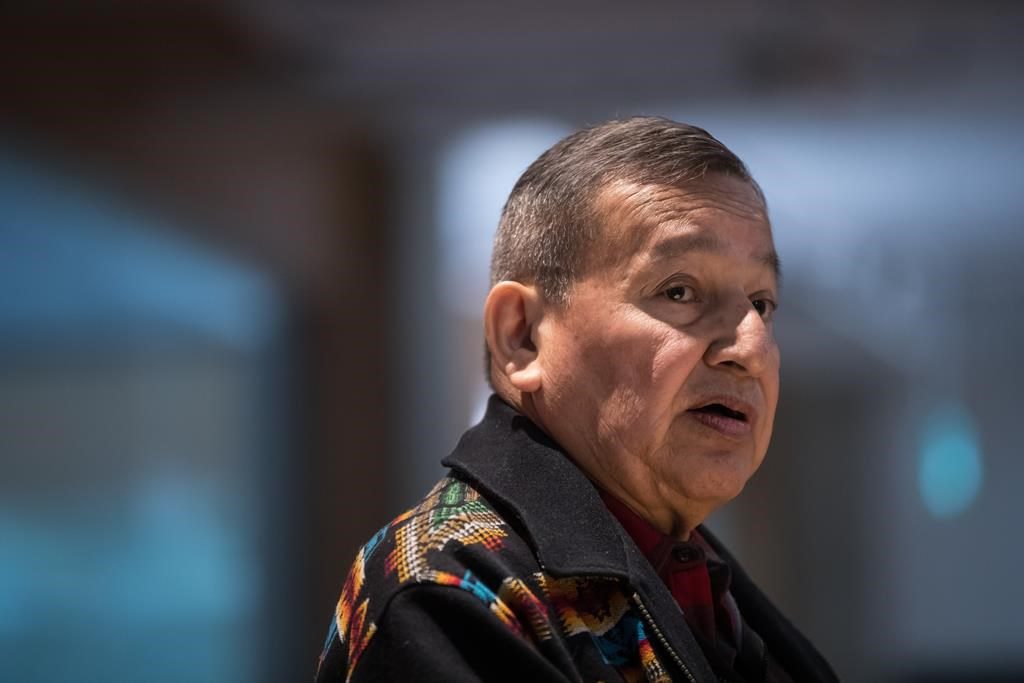 VANCOUVER — As stories of the horrors of residential schools circulate after the Tk’emlups te Secwepemc First Nation announced it had located what are believed to be the remains of 215 children, Grand Chief Stewart Phillip of the Union of B.C. Indian Chiefs said he feels a connection with the former students.

Phillip was placed in a foster care system in the 1950s that, to this day, consists of a disproportionate number of Indigenous children, he said. He was raised by white people and he was one of only two Indigenous students at his high school.

There are obvious differences with the residential school system, which was largely run by churches, but Phillip said the child welfare system also shares some similarities in the way that children have been taken from their families, communities and nations.

“You’re isolated from your history, your language, your culture, your customs. As a consequence, I don’t sing, I don’t drum, I don’t dance,” he said in an interview.

“That may sound like not much to you but to me it’s like part of my heart and soul has been ripped out. It really bothers me when I’m in an environment where there’s drumming and singing and celebrating because I feel so left out, so isolated, so not belonging.”

Children in care are more likely to suffer mental illness, and drug and alcohol addiction, as well as deal with issues associated with trauma, he noted.

“My vision of this is that it’s two sides of the same genocidal coin,” Phillip said referring to residential schools and the child welfare system.

“They both inflicted enormous trauma on the victims of both systems.”

Phillip is among several former foster children, advocates and politicians drawing the link between the two systems and calling for change.

“Children are still being separated from their communities. Foster care is the new residential school system. The suicide epidemic is the new form of Indigenous genocide,” Qaqqaq said in an emotional address.

Prime Minister Justin Trudeau said the removal of Indigenous kids from their home communities must end.

In 2019, the Commons passed a bill to counter the overrepresentation of Indigenous children in foster care. Since then, Ottawa has been working to allow Indigenous communities to keep at-risk children and youth in their home communities with their own language and culture, Trudeau said.

Beyond cultural harm, former children in care also have higher death rates than the general public.

A report published three years ago by the BC Coroner Service’s Child Death Review Panel found young people leaving government care died at five times the rate of the general population of young people in the province, and a disproportionate number of those fatalities were Indigenous youth.

Phillip said the only hope for Canada is to teach the “absolute truth” in schools about its racist history, including the legislation and policies that created the residential school and child welfare systems. Politicians also need to stop referring to a “dark chapter” in the country’s history when the effects of racism are ongoing, and there should be harsher penalties for racist attacks and acts of hate, he said.

Phillip said he gets strength and comfort from his wife Joan and through the advocacy work he does fighting for Indigenous and other rights.

Phillip’s perspective was mirrored by another former foster child, jaye simpson, who uses the pronouns they and them and does not capitalize their name.

“My experiences in care were very restrictive and traumatizing where I didn’t have a lot of access to my culture,” said simpson, 26, who is Oji-Cree and spent 16 years in foster care in British Columbia and Manitoba.

Although simpson’s care was overseen by a delegated Aboriginal agency, simpson said at times there was no opportunity to participate in cultural events or language classes.

The B.C. Ministry of Children and Family Development says online that its practice emphasizes family preservation, when appropriately safe, keeping children and youth from coming into care.

After being placed with a “really good” foster family in Kamloops, simpson found kinship and mentorship within the Tk’emlups te Secwepemc community. After aging out of care, simpson remained in Kamloops and worked on the powwow grounds and with community groups.

“To me, Kamloops is a very important place, I had access to a lot of healing and kinship,” said simpson, who acts as an advocate for foster kids.