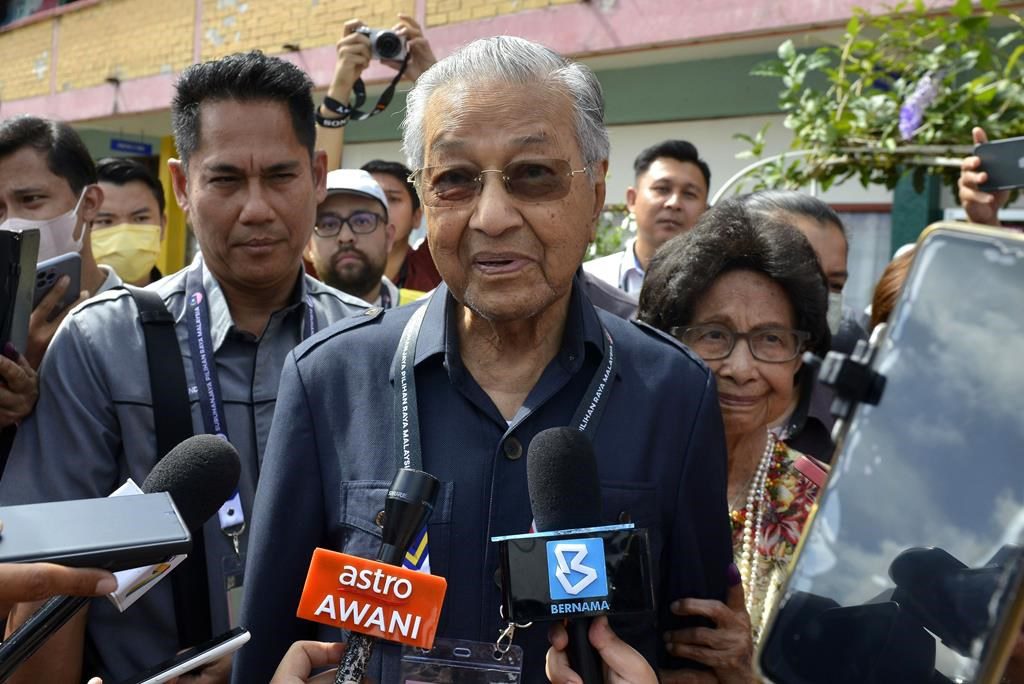 KUALA LUMPUR, Malaysia (AP) — The two biggest winners of Malaysia’s general elections are competing Sunday to hammer out alliances to form a government after tightly-fought general elections failed to produce a clear winner, with the nation’s king to be the final arbiter.

The unprecedented hung Parliament after Saturday’s divisive polls saw the rise of Malay nationalists and plunged the country into a new crisis, stunning many Malaysians who hope for stability and unity after political turmoil that has seen three prime ministers since 2018 polls.

The Malay-centric Perikatan Nasional, or National Alliance, led by former Prime Minister Muhyiddin Yassin, was an underdog that enjoyed an unexpected surge of support with 73 out of 222 Parliamentary seats.

Its hard-line ally the Pan-Malaysian Islamic Party was the biggest winner with a haul of 49 Parliamentary seats — more than double what it won in 2018. PAS, which touts Sharia and rules three states, is now the single largest party and its rise has stoked fears of greater Islamization in the country.

Opposition leader Anwar Ibrahim’s reformist alliance topped the race with 82 federal seats, but fell far short of the 112 needed for a majority.

The alliance led by the United Malays National Organization, which ruled Malaysia since independence from Britain until 2018, was the biggest loser. It won only 30 seats in its worst-ever performance as many Malays opted for Muhyiddin’s bloc, which has touted itself as a “caring, clean and stable” alternative.

“This election had reinforced identity politics. Given that no party has outright majority, the newly formed coalition government will need to unite the nation,” said Amir Fareed Rahim, director of strategy at public affairs at political risk consultancy KRA Group.

Many rural Malays, who form two-thirds of Malaysia’s 33 million people — which includes large minorities of ethnic Chinese and Indians — fear they may lose their rights with greater pluralism under Anwar’s alliance. This, together with corruption in UMNO, has benefited Muhyiddin’s bloc.

Among other key election losers was two-time former Prime Minister Mahathir Mohamad, who at 97 is leading a separate Malay movement. He suffered a shocking defeat to National Alliance’s bloc.

Both Anwar and Muhyiddin claimed they have enough support to secure a majority, but have not provided details.

Anwar told a news conference earlier Sunday that he obtained support in writing from lawmakers to obtain a simple majority. He said this will have to be submitted to King Sultan Abdullah Sultan Ahmad Shah, who will have the final say. The king’s role is largely ceremonial in Malaysia, but he appoints the person he believes has majority support in Parliament as prime minister.

“We have obtained the majority … majority means more than 111,” Anwar said.

Muhyiddin, meanwhile, said he had received a letter from the palace indicating his bloc may have been given preference to form a government over Anwar. He met with the leader of the Borneo bloc earlier Sunday and said negotiations are also being held with other groups.

“God willing, the federal government will be able to be formed in the near future,” he wrote.

Muhyiddin took power in March 2020, defecting from Anwar’s alliance and joining with the UMNO-led alliance in a move that triggered the government’s collapse. The partnership was beset by infighting and he resigned after 17 months.

The two states on Borneo island won a combined 32 federal seats, and their support is crucial. UMNO will also be important, and leader Ahmad Zahid Hamidi said in a statement that his National Front alliance is willing to set aside differences to ensure that a stable government can be formed, but gave no details.

Zahid, who is fighting dozens of graft charges, faces pressure to resign after UMNO’s second drubbing at the polls.

Then-Prime Minister Ismail Sabri Yaakob called snap polls in October after buckling under pressure from UMNO. It expected a strong comeback amid a fragmented opposition but the strategy backfired. UMNO leaders are to meet later Sunday to decide who to support.