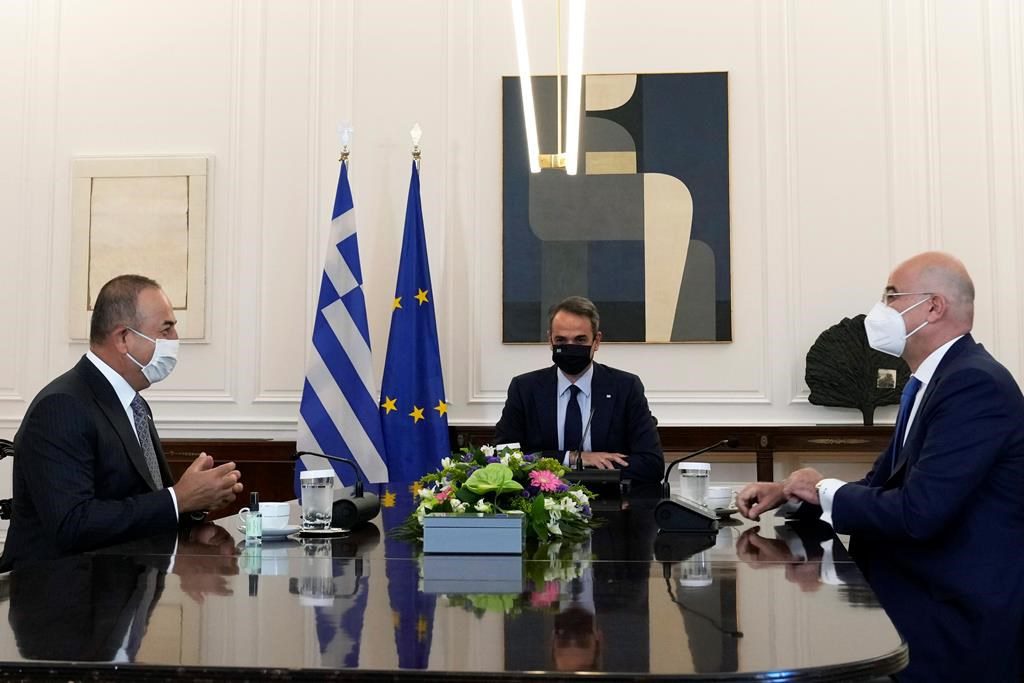 ATHENS, Greece (AP) — Turkish Foreign Minister Mevlut Cavusoglu is in Athens Monday for meetings with his Greek counterpart and the country’s prime minister as the neighbors and NATO allies seek to mend frayed ties.

Cavusoglu was meeting with Prime Minister Kyriakos Mitsotakis and Foreign Minister Nikos Dendias. The foreign ministers are to make statements to the media after their meeting. It will be the first time the two have spoken together in public since Dendias visited Ankara in April and their joint press conference descending into a trading of barbs and accusations.

Even before Cavusoglu’s arrival in Athens Sunday evening, it was clear tension between the countries remains. The Turkish minister preceded the official part of his visit with a private trip to the northeastern Greek region of Thrace to meet with members of the Muslim minority that resides there.

Referring to the minority as Turkish is diplomatically sensitive and highly contentious in Greece, which recognizes the minority only as a Muslim one. Greece has tried to promote the ethnic diversity of the minority, highlighting its Roma and Pomak components, in an effort to contain Turkish influence and possible secessionist sentiment.

Greek Foreign Ministry spokesman Alexandros Papaioannou responded that Greece “steadily adheres to international law and the protection of human rights. It fully implements the obligations stemming from the Treaty of Lausanne, which explicitly and clearly refers to a Muslim minority in Thrace.”

He said that “Turkey’s constant attempts to distort this reality, as well as the allegations of supposed non-protection of the rights of these citizens, or of alleged discrimination, are unfounded and are rejected in their entirety.”

The 1923 Lausanne treaty handled the exchange of populations between Greece and Turkey in the aftermath of war, uprooting around 2 million people: approximately 1.5 million Orthodox Christians living in Turkey and half a million Muslims living in Greece.

The Muslim community in Thrace and the Greek community of Istanbul were exempt. However, the Greek minority in Istanbul has dwindled to a fraction of the estimated 200,000 people, with many fleeing persecution in the 1950s.

Papaioannou said that “Greece desires the improvement of relations with Turkey. A necessary condition is the respect of international law.”

Greece and Turkey have been divided for decades over a series of disputes, including territorial rights in the Aegean. Last summer, tension between them rose dramatically, with disagreements over maritime boundaries and energy exploration rights in the eastern Mediterranean leading to the two countries’ warships facing off.