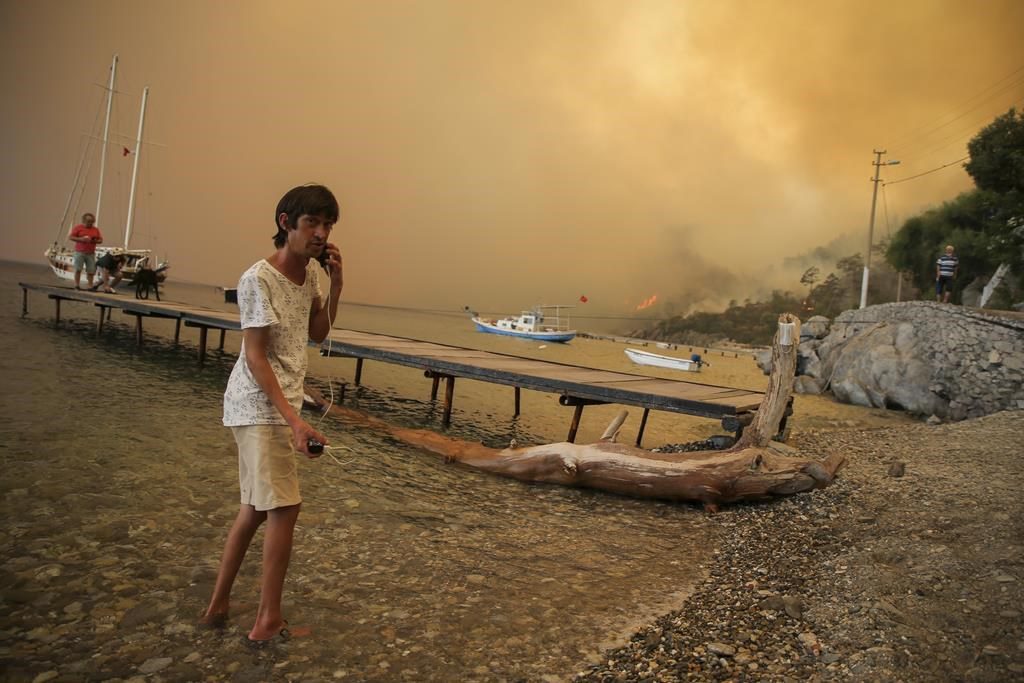 BOZALAN, Turkey (AP) — Selcuk Sanli let his two cows lose to fend for themselves, put his family’s most treasured belongings in a car and fled his home as a wildfire approached his village near Turkey’s beach resort of Bodrum, one of thousands fleeing flames that have coated the skies with a thick yellow haze.

He returned to check on his house Monday in Bozalan only to find that the fire had flared again.

“Property is an important part of life but life itself comes first,” he said as he prepared to leave his home once again.

For the sixth straight day, Turkish firefighters were battling Monday to control the blazes tearing through forests near Turkey’s beach destinations. Fed by strong winds and scorching temperatures, the fires that began Wednesday have left eight people dead and forced residents and tourists to flee vacation resorts in a flotilla of small boats.

Many villagers lost homes and farm animals and had trouble breathing amid the heavy smoke.

Agriculture and Forestry Minister Bekir Pakdemirli said crews were still tackling seven fires in the coastal provinces of Antalya and Mugla that are popular tourist areas. Other active fires were in Isparta, 380 kilometers (236 miles) northeast, in Denizli province in southwest Turkey.

Another fire in Tunceli, in southeast Turkey, was contained on Monday, the minister said. In all, 129 fires that broke out in over 30 provinces since Wednesday have been extinguished.

“We are going through days when the heat is above 40 C (104 degrees Fahrenheit), where the winds are strong and humidity is extremely low,” Pakdemirli said. “We are struggling under such difficult conditions.”

At least 13 settlements in Mugla were fully or partially evacuated, the minister said.

In Bozalan, Esra Sanli sobbed as she pointed at a fire raging near the village.

“There’s no plane, there’s no helicopter, there’s no roads. How is this going to be extinguished? How?” she said.

On Sunday, residents were forced to evacuate the nearby villages of Cokertme as flames neared. Some got on small boats and others left by cars as the fire got closer and closer — scenes which Ahmet Aras, the mayor of the nearby resort of Bodrum, described as “hell.” Precautions were taken to protect two nearby thermal power plants, though they were not in immediate danger.

An evacuation order was also issued for the town of Turunc, near the seaside resort of Marmaris in Mugla province. People fled on small boats, carrying suitcases.

The EU said it helped mobilize firefighting planes from Croatia and Spain to help Turkey. Planes from Ukraine, Russia, Azerbaijan and Iran have also been fighting the blazes.

Spain’s government said it is sending two water-dumping aircraft and one transport plane to help Turkey with the wildfires, as well as 27 soldiers to help out.

A total of 16 planes, 51 helicopters and more than 5,000 personnel were currently tackling the fires, he said.

In Marmaris, Mayor Mehmet Oktay said fires were still burning in two locations and estimated that 11,000 hectares (28,000 acres) of forest had been incinerated.

“Our lungs have been burning for the past five days,” he told Haberturk television.

The health minister, Fahrettin Koca, said at least 27 people affected by the fires were still receiving treatment in hospitals while hundreds of others had been treated and released.

Interior Minister Suleyman Soylu said authorities were investigating the cause of the fires, including human “carelessness” and possible sabotage by outlawed Kurdish militants. He said one person was detained over allegations that he may have paid by the group to start a fire. Turkish President Recep Tayyip Erdogan said one of the fires was started by children.

Experts however, mostly point to climate change along with accidents caused by people.

A heat wave across southern Europe, fed by hot air from North Africa, has led to wildfires across the Mediterranean, including in Italy and in Greece, both places where people had to be evacuated by sea to escape the flames.

Follow all AP stories on climate change issues at https://apnews.com/hub/Climate.