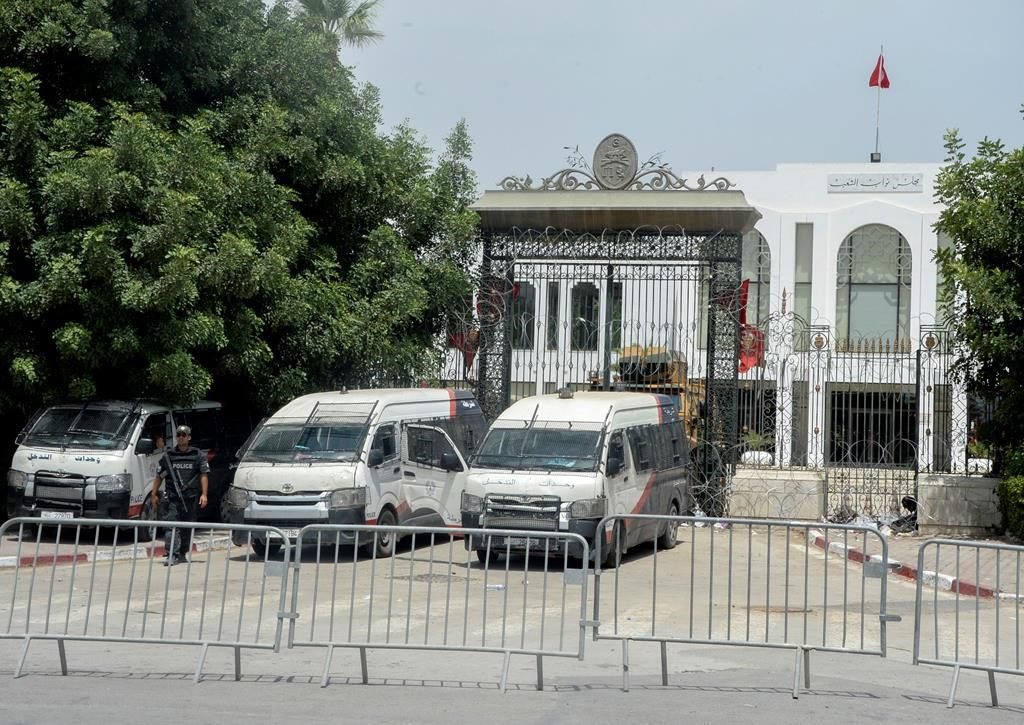 TUNIS, Tunisia (AP) — Days of political turmoil in Tunisia over a crippled economy and surging coronavirus infections have left the country’s allies in the Middle East, Europe and the United States watching to see if its fragile democracy will survive.

European countries — most notably nearby Italy — worry about a flood of migrants should Tunisia slide further into chaos.

Autocratic leaders from Egypt to Saudi Arabia hope this week’s power grab by Tunisian President Kais Saied spells doom for the region’s Islamists. But they also fear a reignited Arab Spring, like the uprising that was kindled by Tunisia a decade ago.

And around the world, pro-democracy campaigners wonder if a country they held up as a beacon is drifting back toward dictatorship.

“The ball is now in the people’s court,” Egyptian activist el-Ghazaly Harb said in a Facebook post. “They are able to correct the path without abandoning the peaceful democratic model that we all hope they can see to the end,” he said. “The answer will always be Tunisia.”

Tunisia, with only 12 million of Africa’s 1.3 billion people, holds outsized symbolism as a nation that designed a democracy from scratch and earned a Nobel Peace Prize after its largely bloodless revolution.

Without warning on Sunday, Saied froze the nation’s parliament and took over executive powers, saying he had to save the country, which is suffering from an outbreak of the virus and a failing economy.

Since then, he has moved against corrupt lawmakers and tycoons and strengthened military oversight of the pandemic. He and his aides held a flurry of meetings with foreign allies, promising that his power grab is temporary.

But his next steps are unclear.

The main victim of his decision — the Islamist party Ennahdha — promises to resist, peacefully.

Tunisian analysts don’t expect an army-driven takeover like that seen in Egypt, or a return to the autocratic past, thanks in part to a population that’s no longer afraid to speak out. But the situation is volatile, and new protests are expected Saturday, when supporters and opponents of the president could face off.

Pro-government voices in Egypt, Saudi Arabia and the United Arab Emirates celebrate what they interpret as a victory over political Islam, which they see as a threat to their rule.

Egypt is watching carefully. It was the first to follow Tunisia in an outburst of mass protests against autocratic rule in 2011. In the aftermath, the highly organized Muslim Brotherhood rose to power, but was ousted in 2013 amid a military-backed popular uprising led by Abdel Fattah el-Sissi.

El-Sissi has embarked on economic reforms and brought some political stability to the Arab world’s most populous country, but his tenure has been marred by the jailing of tens of thousands of people.

Leading Brotherhood figures now face death sentences or life in prison. The group has been outlawed and branded a “terrorist group” in Egypt and the UAE, which itself has detained dozens of Emirati Islamist figures.

Some activists worry Tunisia could head down a similar path, despite Saied’s credentials as an independent technocrat.

“Coups are not only started by the military; they can be started by a civilian and completed by officers,” said Shady Lewis Boutros, an Egyptian novelist and writer who lives in the U.K., in a Facebook post.

Abdelrahman al-Rashed, who runs a Saudi-owned media group and is close to the royal court, said Saied is saving the country from returning to the chaos sparked by the Arab Spring. In a column for the Arabic Ashraq al-Awsat newspaper, he wrote that political turmoil in Tunisia marks the “death of the Muslim Brotherhood’s authority.”

Ennahdha itself has distanced itself from more militant Islamists, and its leader, Rachid Ghannouchi, told The Associated Press this week that its critics are using it as a scapegoat for Tunisia’s problems. He noted that his party has played a major role in parliament in the decade since the revolution, which opened the way for his return from 22 years of exile in London, and won the most seats in the last legislative elections.

Some question whether the Gulf states had a role in Tunisia’s current tensions. But Tunisian political scientist Mohamed-Dhia Hammami downplayed that speculation, arguing that Tunisians are more focused on day-to-day concerns than the discourse around the Muslim Brotherhood.

From 2014-20, the bloc invested 1.6 billion euros ($1.9 billion) in Tunisia to build democracy and provide social and economic aid. It has given 330 million euros ($392 million) to help the country recover from the impact of coronavirus restrictions. Another 600 million euros ($712 million) in EU macro-financial assistance was agreed to in May.

Most significantly, Tunisia is a key partner in limiting the flow of migrants from Africa to the EU. The 27 member states are hopelessly divided over how to manage the arrivals of those seeking a better life in Europe, so the bloc has resorted to outsourcing the challenge to other countries.

However, Tunisians now make up one of the largest groups of people seeking asylum in Europe. And the “Tunisia corridor” is a growing concern for the EU’s border and coast guard agency Frontex.

From 2019 to 2020, the number of people reaching Italy from Tunisia grew by almost 400%, to more than 13,000 people, according to some nongovernmental organizations. That includes a period when COVID-19 restrictions significantly reduced migrant movements.

Saied had a “frank discussion on irregular migration” in Brussels last month with top EU officials, and they agreed to work more closely against smugglers and on border management. The latest turmoil adds to concern in Europe that things might get worse.

On Tuesday, the EU’s top diplomat called for Tunisia’s constitutional order to be restored, without directly apportioning any blame.

The U.S. government also is watching closely. In addition to supporting its democracy, the U.S. has helped fund Tunisia’s efforts to tamp down violent Islamic extremism.

Just hours after Saied’s announcement, he spoke with Secretary of State Antony Blinken, who urged him to “adhere to the principles of democracy and human rights” and “maintain open dialogue with all political actors and the Tunisian people.”

Tunisians themselves want jobs and opportunity, which have remained elusive since their revolution, and many support the president — at least for now.

While there is a risk of new mass unrest, Hammami said “there are strong political actors in Tunisia who can play the role of counterbalance,” including labor unions. And unlike in Egypt, Tunisia’s military has little control over the economy.

Omar Oudherni, a retired Tunisian army brigadier and security expert, said the Tunisian people “will not be silent on any tyrant.”

“Doing what is good will receive support, and if (Saied) wants dictatorship, the people will sweep him up, as they swept others,” he added.