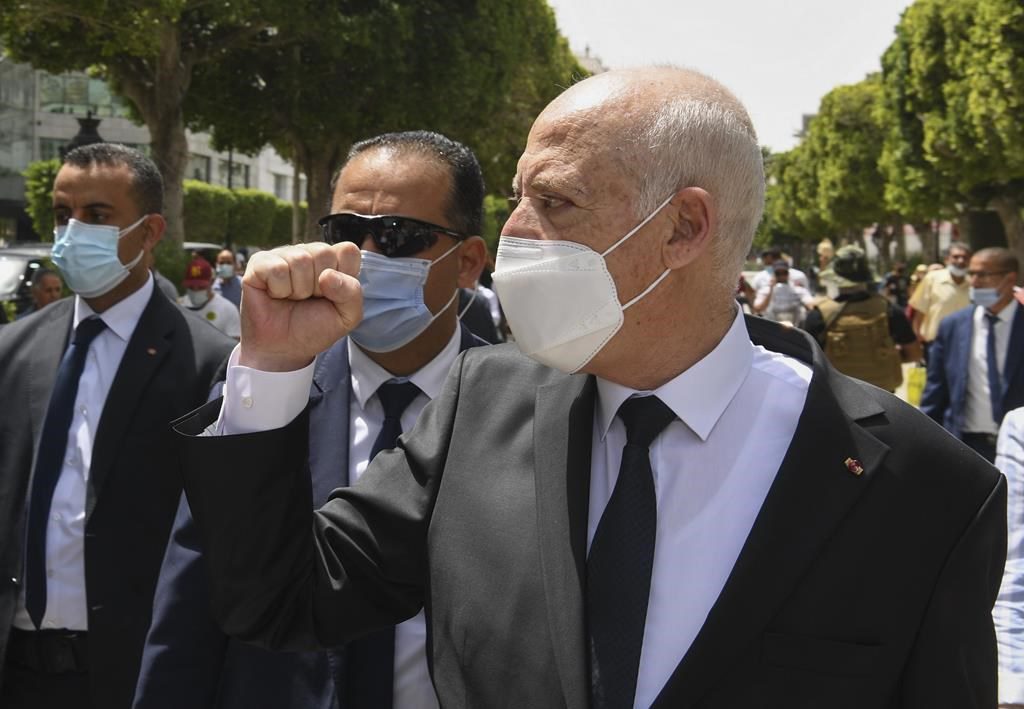 TUNIS, Tunisia (AP) — Tunisia’s leader claimed Sunday that some desperate youths are being paid to try to leave Tunisia illegally for Europe, saying the goal is to damage the country from within and hurt its ties with Europe.

President Kais Saied made the remarks during a stroll down the iconic Avenue Bourguiba, the main axis in the Tunisian capital of Tunis, a week after firing the prime minister and other top officials and freezing parliament. He listened to passersby calling out his name and shouting “Tunisia!” but said nothing about his much-awaited next steps.

Many fear Tunisia’s fragile democracy is in danger without a clear map of how the president plans to restore democracy. It is the only nation to develop a democracy after the Arab Spring uprisings.

Instead, Saied denounced those who exploit migrants, as hundreds of youths leave Tunisia in the warm season to try to make their way by smugglers’ boats to Europe. He claimed that some of his countrymen with political motives are paying desperate youth to make the trip, saying their intention is to repeat the mass illegal migration that began after the Tunisian revolution a decade ago.

“There are people who hurt Tunisia. I ask myself how they could make 1,500 youths leave,” he was heard saying in a video released by his office.

“They give them money so that they leave. Those people exploit misery and want a remake of what happened in 2011,” Saied said. ”They are hurting Tunisia’s relations with Italy, Europe and other countries.”

Saied made the same assertion earlier Sunday when he formally accepted 1.5 million doses of anti-COVID-19 vaccines from Italy, warning against any “political exploitation” of the country’s youths.

The president did not make clear who were using youths to allegedly harm the North African country.

The Tunisian Coast Guard picked up 31 Tunisian youths on Sunday, a day after stopping three attempted crossings and seizing five small boats and a large sum of money. A total of 188 migrants, 56 of whom were Tunisian, were saved, while 11 other attempts to embark on the journey to Europe were stopped, according to the Interior Ministry.

Meanwhile, dozens of migrants, most of them from Tunisia, reached the Italian island of Sardinia over the weekend, the Italian news agency ANSA reported.

Follow all AP stories on global migration at https://apnews.com/hub/migration.