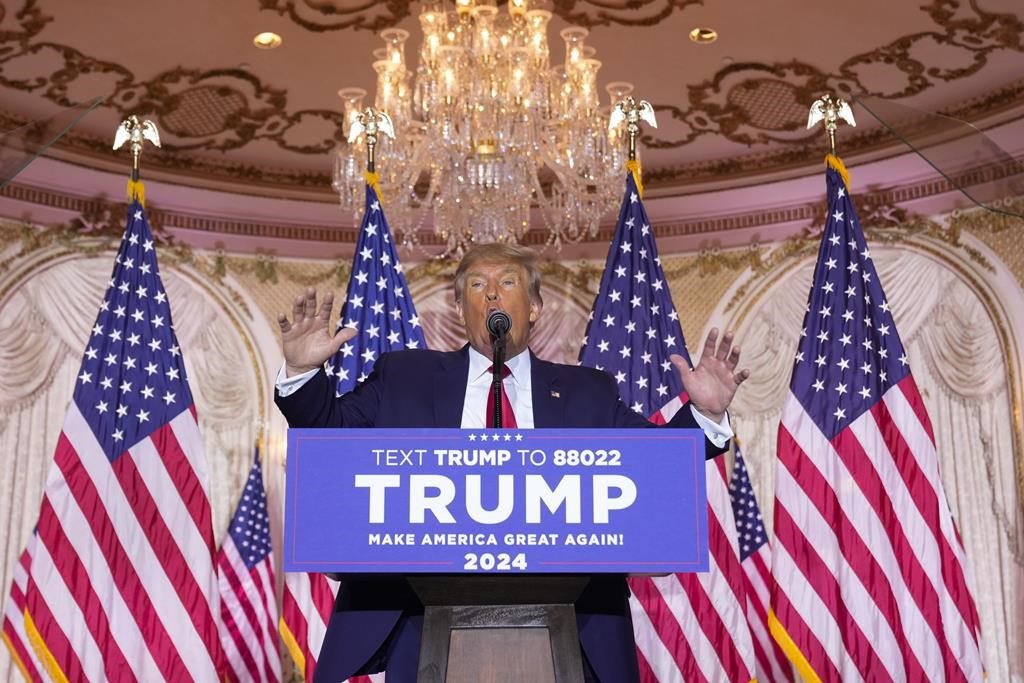 WASHINGTON — It’s setting up as a right-wing clash of the titans, a battle royal between Republican leviathans in search of the ultimate political prize.

So far, however, only one player has entered the game: Donald Trump.

“America’s comeback starts right now,” the former president said Tuesday as he declared his intention to seek the 2024 Republican nomination for president.

“In order to make America great and glorious again, I am declaring my candidacy for president of the United States.”

He did it inside a gilded, mirrored ballroom at his private Mar-a-Lago country-club fortress in Palm Beach, from a lectern surrounded by American flags. In the crowd, dozens of cellphone screens held aloft captured his entrance, his wife Melania at his side.

In an abbreviated version of his usual rally performance — he entered, on cue, to Lee Greenwood’s “God Bless the U.S.A.,” his unofficial theme song — Trump made no mention of his presumptive rival, Florida Gov. Ron DeSantis.

But in a speech that ran just over an hour, which is brief by Trump standards, he hinted at a possible strategy for the nomination battle to come: portraying DeSantis as a career politician who will put party loyalty above his constituents.

“This is not a task for a politician or a conventional candidate,” Trump said. “This is a task for a great movement that embodies the courage, confidence and the spirit of the American people.”

As he often does, he mentioned Canada by name when he cited the U.S.-Mexico-Canada Agreement, signed in 2018, which replaced NAFTA: “the worst trade deal ever made,” as he described it.

He lingered, as well, on energy independence and fuel prices — an issue that often perks up ears north of the border, particularly since the Alberta government’s full-throated efforts earlier this year to promote Canadian oil and gas to Joe Biden’s current administration.

It also raises fears that a Trump administration would run roughshod over efforts by the current White House to confront climate change — a threat Trump dismissed by comparing the threat of nuclear war with the prospect of sea levels increasing “by an eighth of an inch” over “the next 200 to 300 years.”

Foreign countries “that hate us gravely” are perplexed by a U.S. reluctance to expand domestic fossil-fuel production even now, he said.

“We go to them begging for oil, and we have more liquid gold under our feet than they have or any other nation has — and we don’t use it because we’re going to them? It’s crazy, what’s happening. We can’t let it continue.”

Over his four-year term, Trump appeared uninterested in a constructive relationship with the federal government. He complained frequently about access to Canada’s dairy market, griped publicly about Prime Minister Justin Trudeau and Chrystia Freeland, who was foreign affairs minister at the time, and left punitive tariffs on Canadian steel and aluminum producers in place for months after the USMCA was completed.

A Trump presidency would be “a terrible situation for Canada,” warned Aaron Ettinger, a politics professor at Carleton University in Ottawa.

“Canada has enjoyed a sort of benign neglect from the Biden administration,” Ettinger said.

“Trump back in the White House places uncertainty back at the centre of the North American relationship. And that is bad for Canada, because when access to the American market is uncertain, the Canadian economy suffers.”

In recent days, Trump has not appeared as invincible as he once did.

Republicans — until recently either on board or on mute when it came to the idea of Trump as their nominee — have been having second thoughts ever since voters pulled the rug out from under their feet in last week’s midterm elections.

For them, the best news to emerge Nov. 8 was the convincing 20-point re-election win for DeSantis, who has yet to declare his intentions but is widely seen as a contender for the crown of presumptive Republican nominee.

Media reports suggest DeSantis himself has done little to dispel that notion.

“At the end of the day, I would just tell people to go check out the scoreboard from last Tuesday night,” he said Tuesday, ahead of Trump’s announcement, when asked about the former president’s criticism.

Several recent polls suggest DeSantis is gaining on Trump, if not surpassing him. That appears to have loosened the tongues of some Republicans on Capitol Hill, particularly those who blame his candidates for their poor showing.

“You have two players with significant constituencies, both having political claims to be the next leader, going at it for all the marbles,” Ettinger said. “This is going to be civil war within the Republican Party.”

Wyoming Sen. Liz Cheney, the vice-chair of the select Senate committee investigating the Jan. 6 riots, told a Washington Post event Tuesday that she doesn’t expect Trump to ever again set foot in the White House.

“It’s important for people to look at what’s happening and what he’s doing, not just through a political lens, but through the basic facts of his total lack of fitness for office,” Cheney said.

“There’s no question that he’s unfit for office and I feel confident that he will never be president again.”

Mitt Romney, the Utah Republican who twice voted to impeach the former president, was only slightly more diplomatic in an interview with MSNBC.

“It’s like the aging pitcher who keeps losing games,” Romney said. “If we want to win, we need a different pitcher on the mound.”