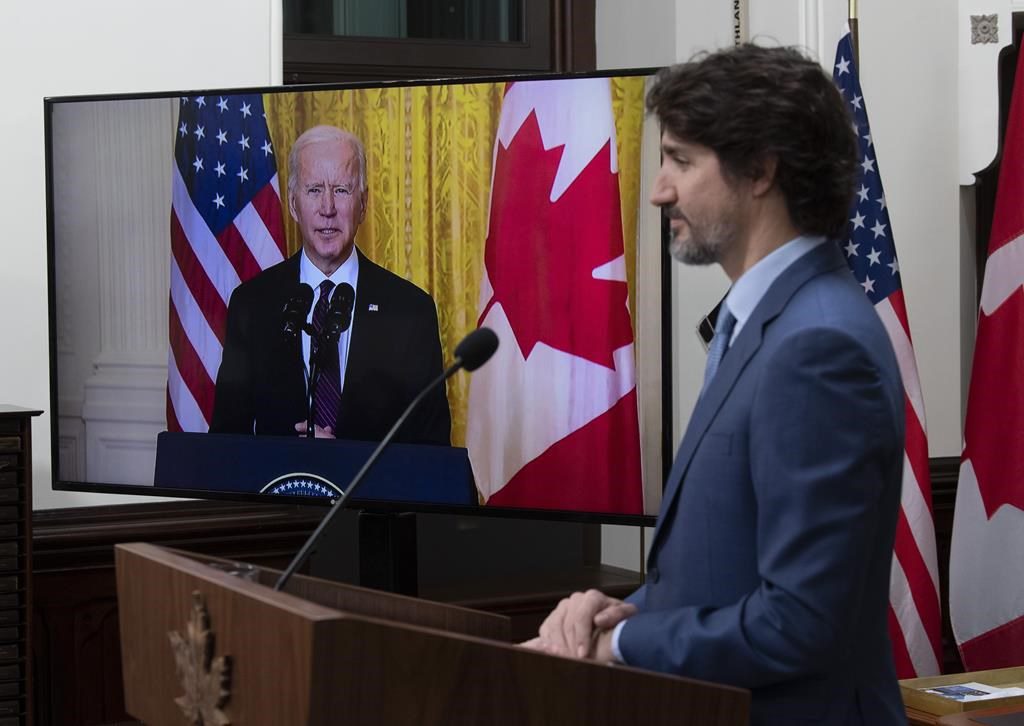 OTTAWA â€” Prime Minister Justin Trudeau is under pressure to step up his commitment to cutting greenhouse gas emissions in Canada within the next decade as he heads into a United States-hosted climate summit with global leaders.

The virtual two-day event starting Thursday, which is Earth Day, is where the government says Trudeau plans to unveil new reduction targets for 2030.

The Liberal government has promised to release new targets ahead of the United Nations Climate Change Conference this fall, when Canada plans to discuss progress on the issue.

Participating countries agreed to set national targets to lower emissions of these heat-trapping gases every five years, increasing the aggressiveness of targets over time.

In Monday’s budget â€” which promises a “green” recovery out of the COVID-19 crisis â€” Trudeau’s Liberals say existing federal and provincial measures will see emissions lowered by 36 per cent by 2030 below 2005 levels.

Environmentalists and climate organizations say to show it’s serious, Canada needs to set a reductions target of at least 40 to 50 per cent below 2005 levels.

“There is no way they can go to Washington with 36 per cent and not get laughed out of the room,” said Keith Stewart, a senior energy strategist with Greenpeace Canada.

Some say it needs to be higher, like 60 per cent.

Among those who believe the floor needs to be 50 per cent is Mary Robinson, chair of the international human rights group The Elders, and former UN High Commissioner for Human Rights.

The former Ireland president believes there’s a perception Canada has accomplished more on fighting climate change than it actually has.

"Canada’s the only G7 country where emissions have increased since the signing of the Paris Agreement."

A recent report shows in 2019 the country’s annual emissions increased slightly to 730 million tonnes of carbon dioxide and its equivalents, closer to where it was in 2005 than its 2030 promise.

Beyond that, Canada wants to reach net-zero emissions by 2050.

Environment and Climate Change Minister Jonathan Wilkinson expects Canadians will see emissions start to fall when the 2020 report is released, and says 2019 levels would have been higher without efforts like charging a carbon price.

He recently penned a letter to other federal party leaders asking for their input on setting the new target. The letter was obtained by The Canadian Press.

“It is time to step up and show the next level of Canada’s ambition to the global community at this time of climate crisis. I sincerely hope Canada can present an ambitious and unified front,” reads the letter.

The Greens say they want to see a 60 per cent goal with enforceable targets and timelines, while the NDP is pushing for at least 50 per cent and reaching further wherever possible.

Michael Bernstein, executive director of the policy organization Clean Prosperity, believes if Canada set a goal of reducing emissions in the range of 40 to 50 per cent, it would show it’s mindful of the economic impacts and those with livelihoods in oil and gas.

He notes the Liberals have recently shown a willingness to back up climate promises with policies, which may inform a careful approach.

“We’re trying to signal a credible pathway to global investors â€” and to the general public â€” but particularly for investors we’re going to need to attract tens of billions, perhaps hundreds of billions of dollars, into the Canadian economy to make the transition to a cleaner, low-carbon economy,” said Bernstein.

Another factor is pressure from allies, like U.S. President Joe Biden, who has prioritized fighting climate change with billions in new spending.

Groups have been pushing Biden to adopt a target of slashing emissions by 50 per cent by 2030 below 2005 levels. More than 300 companies signed an open letter supporting that call, such as giants like Apple, Starbucks and McDonalds.

And some suggest Trudeau will at the very least be expected to match.

“Those who didn’t want to be ambitious on climate change kept telling us that we couldn't do more because the Trump administration was holding us back,” said Dale Marshall of Environmental Defence, which is part of a network, including Greenpeace, that believes Canada’s fair share in emissions reductions is 60 per cent.

“This opens up space for Canada to say, ‘OK, now we have a North American partner that is pushing the envelope that wants to do a lot more â€” here’s an opportunity for us to do more.”

Organizations also point to the tone set by the United Kingdom, which this week vowed by 2035 to cut emissions by 78 per cent compared to 1990 levels.

David Waskow, director of the international climate initiative at the World Resources Institute, says both Canada and the U.S. would benefit from setting a target of 50 per cent or higher.

Given the countries’ interdependence on trade, he suggests there could be problems if the countries leave the summit with mismatched targets.

“Industries that are on both sides of the border are not necessarily facing the same kind of direction of travel in terms of where they're headed on reducing emissions,” he said.

Clean Energy Canada, which calls for a target of at least 50 per cent to align with its major trading partners, hopes to see indication that the United States and Canada will move quickly on transportation regulations and plans to use procurement money to “buy clean,” meaning low-carbon goods and services.

Besides targets, some are watching for whether Canada signals any willingness to pull further away from fossil fuels.