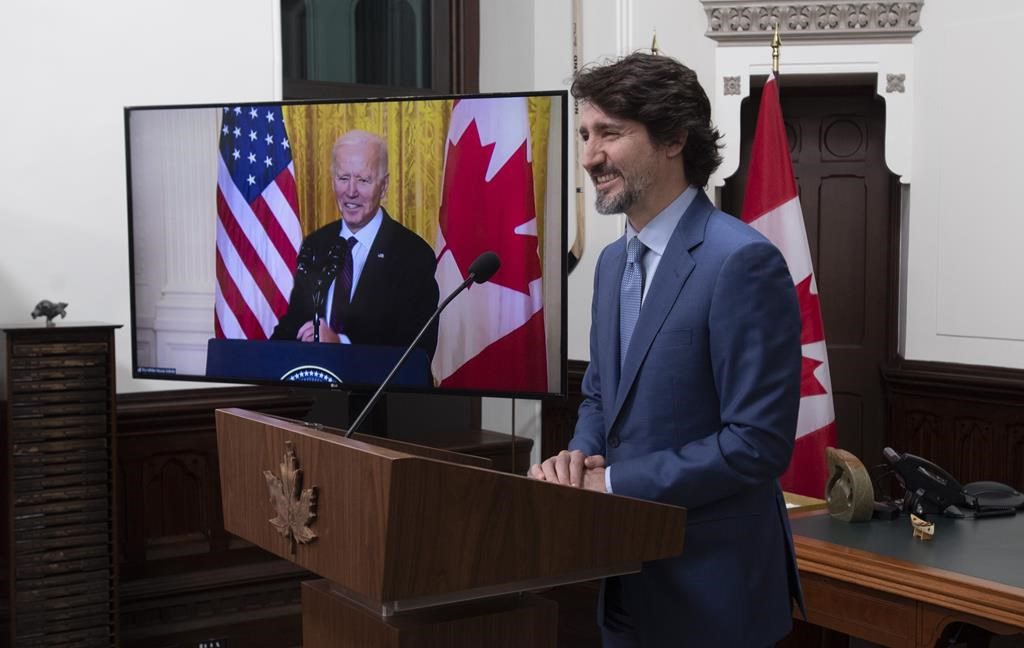 OTTAWA â€” Prime Minister Justin Trudeau is promising to slash Canada’s greenhouse gas emissions by 40 to 45 per cent over the next nine years, but without specifics on how to meet the more ambitious goal, which falls short of the target set by its closet ally.

Speaking virtually to a summit of global leaders convened by U.S. President Joe Biden to discuss fighting climate change, Trudeau on Thursday announced the new targets, which are four to nine per cent higher than his current plan to cut emissions by 36 per cent by 2030.

The cut applies to 2005 emission levels.

In his summit address, Trudeau told world leaders that because of policies like his government’s national carbon price, which is set to rise to $170 per tonne by 2030, it was in a position to “blow past” its 30 per cent reduction commitment set out under the Paris Agreement.

“If major economies in the room were to follow Canada’s lead and adopt a rising price on pollution and commit to phase out coal plants, we would accelerate our global path for a safe, prosperous net-zero future,” Trudeau said.

At a separate news conference, Environment and Climate Change Minister Jonathan Wilkinson said the new targets were attainable, and that the country needs to “stretch.”

“We need to stretch because this is an issue on which we needed to be guided by science.”

To cut more heat-trapping emissions, he said it’s likely they will need to look at changes to the country’s methane regulations, as well as getting more emissions-free vehicles on the road.

He ruled out any more increases to the carbon price beyond $170 per tonne.

Beyond 2030, Canada promises to achieve net-zero emissions by 2050.

The federal NDP and Green Party of Canada, who had pushed Trudeau to adopt a target of at least 50 and 60 per cent, respectively, slammed Thursday’s announcement as underwhelming.

“We have said to the world that we don’t have that ambition for ourselves,” she said.

Climate groups also criticized the new targets as being insufficient compared to its allies, with Environmental Defence saying they make Canada “a climate laggard.”

“We have the weakest 2030 carbon reduction target of G7 countries,” national climate program manager Dale Marshall said in a statement.

Wilkinson defended Canada’s targets as indeed being ambitious and able to be met. He said the U.S. has a different economy and suggests if it borrowed from some of Canada’s existing climate policies it would see emissions drop.

In his speech, Trudeau addressed that because Canada produces and exports energy, reducing emissions up to the new target of 45 per cent “will not be easy.”

“He called out the number one barrier to Canadian climate ambition, which is our oil and gas production,” said Catherine Abreu, executive director of the Climate Action Network.

“That’s the fastest growing source of emissions in the country. That’s something we’re going to have to tackle to not only meet the target that they laid out today, but to get closer to our fair share of the effort,” she said.

While its welcome to see Canada lift its target, Abreu says it falls short of the 60 per cent reduction by 2030 that she and others say is needed for the country to do its share to limit global warming to 1.5 C degrees.

“Part of what I’m encouraged by here is the potential for Canada to get into the swing of ratcheting up the ambition of our climate targets over time, which is what the Paris Agreement tells us we’re supposed to do,” she said.

Abreu said the higher goal underscores the need for Bill C-12, legislation being debated that would require the federal environment minister to set rolling, five-year targets for cutting emissions starting in 2030 and ending in 2050.

She and others believe before its passes, it needs to be strengthened to see Thursday’s target reviewed no later than 2025 to avoid a repeat of missing climate targets.

“Historically, Canada has missed every climate goal it has set, and emissions have barely dropped since 2005,” said Michael Bernstein, executive director of the climate policy organization Clean Prosperity.

“It's important to set goals like the 2030 target, but what matters even more are policies that reduce our emissions and enable us to achieve our goals.”

Bloc QuÃ©bÃ©cois Leader Yves-FranÃ§ois Blanchet, who would have preferred Canada align its goal with the U.S., said he would bring forward an amendment to cement the new commitment into Bill C-12.

"The weight of the proof is on (Trudeau’s) own shoulders. And there is only one way to make it clear: it's to write it within his very own law,” he said.

He said his own party’s climate plan will stick to reduce emissions by the 30 per cent committed to under the Paris Agreement and “will not make things up on the fly like Mr. Trudeau did today.”

Former U.S. secretary of state John Kerry, now Biden’s special envoy on climate change, tweeted that Canada’s new 2030 targets, along with measures from other wealthy countries, means half of the world’s economy has committed to efforts needed to limit warming to 1.5 C degrees.

At a briefing, he said the private sector is already pushing society in the direction of more sustainable options, citing the specific example of how many automakers are now focusing almost exclusively on electric vehicles.

“There’s a company called Tesla, which is the highest-valued automobile company in the world. Why?” Kerry asked.

“The world as a whole is moving in this direction,” Kerry added. “No politician â€” no matter how demagogic or how potent or capable they are â€” is going to be able to change what that market is doing.”

â€” With files from James McCarten in Washington, D.C.

This report by The Canadian Press was first published on April 22, 2021.