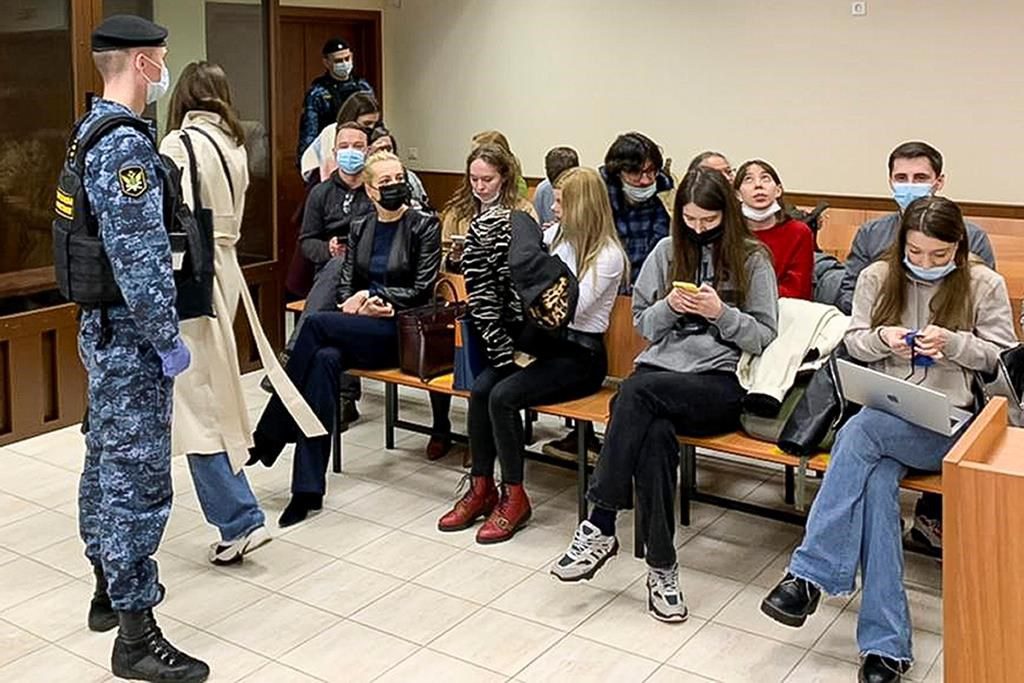 MOSCOW â€” A top ally of imprisoned Russian opposition leader Alexei Navalny said Thursday that the network of the politician’s offices in Russia is being closed as authorities seek to have it and Navalny’s Foundation for Fighting Corruption outlawed as extremist groups.

The Moscow prosecutor’s office petitioned a court this month to declare both the regional offices and Navalny’s anti-corruption organization as extremist groups, a label that would outlaw their activities, expose members and supporters to lengthy prison terms, and pose a major challenge for Navalny's embattled team.

Leonid Volkov, who as Navalny's top strategist runs the regional offices, said Thursday that preserving the network in its current state "is impossible" because of the extremism charges but rebranding them wouldn't help either.

"Unfortunately, it is impossible to work in these conditions. We're officially dismantling the network of Navalny's headquarters," Volkov said on the messaging app Telegram.

Volkov’s statement comes amid a sweeping crackdown on Navalny, President Vladimir Putin's fiercest critic, and his organizations. The politician is currently in prison, and dozens of his aides and associates have been under arrest, targeted for raids by law enforcement, or facing criminal charges.

While imprisoned, Navalny said he developed severe back pain and numbness in his limbs, and he spent more than three weeks on a hunger strike to protest authorities refusing to allow his doctor see him. Instead, they moved him to another prison with a hospital ward.

On Thursday, Navalny appeared in court via a video link from prison for an appeal of his conviction and fine for defaming a World War II veteran. The politician was convicted in February and ordered to pay a fine of 850-thousand rubles (the equivalent of $11,500).

It was Navalny's first public appearance since his transfer to a penal colony last month. Even though the quality of the video link was poor, it was visibly clear that the politician has lost a lot of weight. His head was shaven clean, and he wore a prison uniform and glasses.

Navalny took an active part in the court hearing and spoke energetically despite his gaunt appearance. During a break, he asked his wife, Yulia, who was present at the hearing, to stand up so he could see her. He told her he's now eating several spoons of porridge each day â€” part of winding down his hunger strike.

"72 suits you better than 74," Yulia responded with a smile.

In his statement to the court, Navalny referred to Putin as "the emperor with no clothes" and charged that Russia under his rule "continues to degrade every year." Shortly after his emotional speech, the judge rejected the appeal.

Navalny’s foundation and regional network are also subjects of legal proceedings. Earlier this week, the Moscow prosecutor's office issued an injunction ordering the offices to suspend their activities pending the court ruling on whether to declare them extremist groups, and a court in Moscow imposed restrictions on the Foundation for Fighting Corruption.

The foundation’s director, Ivan Zhdanov, said the organization will continue to work despite the restrictions.

Navalny set up the network of offices in dozens of regions when he was campaigning to run against Putin in the 2018 presidential election. He eventually was barred from running but kept the infrastructure in place.

The regional "headquarters," as the team called them, began their own investigations of graft by local officials and recruited activists, some of whom later ran for public office themselves. The offices also were instrumental in organizing nationwide rallies in support of Navalny this year.

In his statement, Volkov assured supporters that Navalny’s team wasn’t giving up.

"The networks of Navalny’s headquarters doesn’t exist anymore, but there are dozens of strong and tough regional politicians, thousands of his supporters, there are strong and independent political organizations which will work on investigations and elections, public campaigns and rallies. You will help them, and they will succeed," Volkov said.

Navalny was arrested in January upon returning from Germany, where he spent five months recovering from a nerve agent poisoning that he blames on the Kremlin â€” accusations that Russian officials reject.

His arrest triggered protests across Russia that proved to be the biggest show of defiance in years. But they didn't stop authorities from putting Navalny on trial for violating the terms of a suspended sentence while he was in Germany.

The sentence stemmed from a 2014 embezzlement conviction that Navalny has characterized as politically motivated. He was ordered to serve 2 1/2 years in prison and last month was transferred to a penal colony notorious for its harsh conditions.

Some of his top allies were slapped with criminal charges and placed under house arrest, and dozens of his associates in the regions were targeted with detentions and raids.

The case against Navalny's foundation and regional offices is scheduled to be heard by the Moscow City Court on May 17. It remains unclear what evidence authorities have against the organizations because some of the case files have been classified as secret.

Ivan Pavlov, the lawyer representing Navalny’s organizations in court, said after a preliminary hearing Thursday that the defence team has filed a lawsuit to declassify the files. He said a motion also was filed to allow Navalny to participate in the court proceedings, “since his name is mentioned on every page of the law suit."

Pavlov also revealed that a criminal case has been launched against Navalny, Volkov and Zhdanov on charges of creating an organization that infringes on people’s rights, a criminal offence punishable by up to four years in prison.