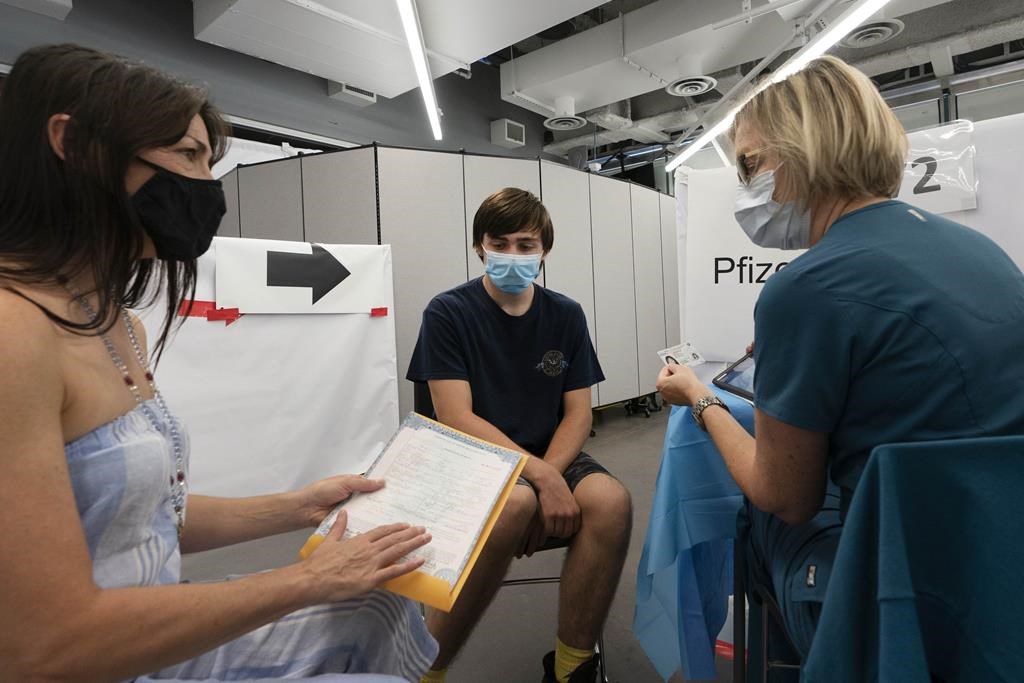 Millions of people in the U.S. who haven’t gotten the COVID-19 vaccine could soon have a new reason to roll up their sleeves: money in their pockets.

President Joe Biden is calling on states and local governments to join those that are already handing out dollars for shots. New York, the nation’s biggest city, started doling out $100 awards on Friday.

The president, health officials and state leaders are betting that the financial incentive will spur hesitant people to get the shot just as the contagious and potentially more powerful delta variant sweeps through parts of the country — particularly those with low vaccination rates — and as the number of daily inoculations falls sharply from its April high.

Jay Vojno, getting his shot Friday in New York, said he figured some kind of incentive was coming, so he was willing to hold off on getting vaccinated until it did.

“I knew they were going to do it, so I just waited,” he said.

Bradley Sharp was among those getting a shot Friday in Times Square. The soon-to-be college student had been putting it off, but knew he would have to get vaccinated because the school he’s going to attend requires it.

“I thought I’d come here and get it today and get my hundred dollars because I’m going to get it anyway,” Sharp said.

Other states are beginning programs to hand out money too. New Mexico helped pioneer cash incentives in June and is starting another $100 handout for vaccinations on Monday. Ohio is offering $100 to state employees who get vaccinated.

Minnesota’s $100 incentive started Friday, although several people who showed up at the Minneapolis-St. Paul International Airport to get jabbed with the single-dose Johnson & Johnson vaccine hadn’t heard about the money.

Vidiya Sami, an office worker from the Minneapolis suburb of Richfield, went to the airport because it was the only location offering the “one-and-done” vaccine.

She said she delayed getting the shot because she was scared at first, “especially reading about … the side effects from other people.”

“And then I kind of made myself more paranoid by joining Facebook groups, and reading everybody else’s symptoms after they got the shots,” she said. “I was basically just giving myself anxiety, but the more I researched about it, you know, the pros outweighed the cons.”

Incentives are not new: States have tried lottery-like giveaways, free beer, gift cards and more. Whether they result in getting more people vaccinated is not clear, said Harald Schmidt, an assistant professor at the University of Pennsylvania and a research associate at the school’s Center for Health Incentives and Behavioral Economics.

Turning to such measures suggests that governments are facing a level of desperation in trying to get shots into arms, he said.

“It is right to be alarmed,” Schmidt said. “It is right to be thinking how do we right this ship.” He added that he understands the motivation for cash incentives, but questioned why they’re needed in the first place.

“If we just get needles into arms we haven’t really made any progress on the bigger picture, which is that whole communities are lacking trust in health care systems or the government,” he said.

The Biden administration is betting the incentives will work. In a statement this week, the White House cited a grocery store chain that offered $100 to its workers to get the COVID-19 shot and then saw vaccination rates climb.

State and local governments can use federal American Rescue Plan relief funding to provide the $100, according to the statement.