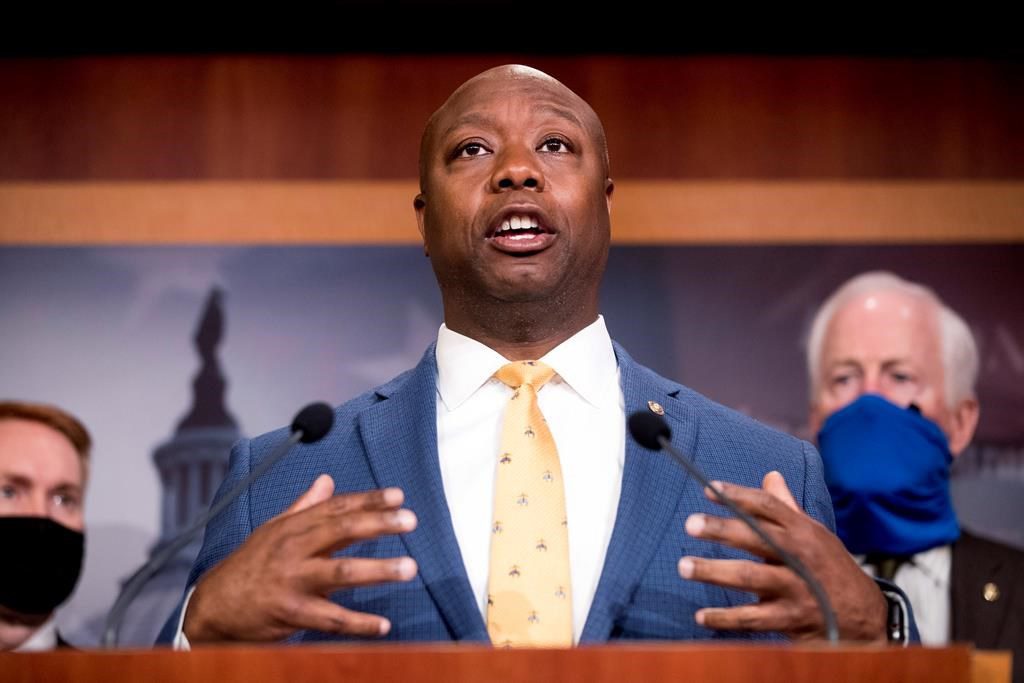 WASHINGTON â€” Tim Scott, the only Black Republican senator, is often happy to dart past Capitol Hill reporters without saying much. This time, he and the spotlight have found each other.

Brought up by a single mother who worked back-breaking hours as a nursing assistant, Scott, 55, has spent a decade in Congress representing South Carolina. Now, the lawmaker who combines a willingness to address racial questions with an advocacy of conservative causes is giving his party's nationally televised response to President Joe Biden's Wednesday night address to Congress.

He's also the lead GOP negotiator as the two parties seek an accord on legislation overhauling police procedures. The issue has long eluded compromise despite national attention fanned by last year's killing of George Floyd, a Black man, and this month's conviction of a former Minneapolis police officer in his slaying.

"You figure out who your audience is, you figure out what you want to say and you try and find a way to say it well," Scott told reporters Tuesday about his speech preparations. "And you lean into who you are."

Demands for social justice are reverberating even as killings of Black people by white police officers continue. Following years of nativist appeals by President Donald Trump and others, out-of-power Republicans are trying to broaden their appeal before 2022 elections that they hope will deliver them control of Congress.

Scott, among only 11 Black senators in history, has used riveting Senate speeches to detail his own distressing encounters with the law. He’s described being pulled over 18 times while driving since 2000, and being halted by a U.S. Capitol security officer who didn’t recognize him as recently as 2019, despite wearing a senator’s lapel pin.

"While I thank God I have not endured bodily harm, I have, however, felt the pressure applied by the scales of justice when they are slanted," he said during a 2016 Senate speech. "I have felt the anger, the frustration, the sadness and the humiliation that comes with feeling like you're being targeted for nothing more than being just yourself."

"On the other side, they are wanting to race bait on tokenism," he fumed. No. 2 Senate Democratic leader Dick Durbin of Illinois quickly apologized for the remark.

Scott, from North Charleston, South Carolina, nearly dropped out of high school. He tells of a life-changing turnabout after befriending a businessman who became a mentor who stressed the value of hard work.

After graduating college, he entered the insurance and real estate businesses and was elected to the Charleston County Council. He was a co-chairman of the 1996 reelection campaign of Sen. Strom Thurmond, R-S.C., an overt segregationist decades earlier. When Scott was elected to the House in 2010, his closest GOP primary rival was Thurmond’s son Paul.

Gov. Nikki Haley appointed Scott to the Senate in 2013 when Sen. Jim DeMint resigned. Scott was easily elected to complete DeMint’s term in 2014 and to his own six-year term in 2016, and is a favourite for reelection next year.

Scott’s background and willingness to discuss racial disparities, a subject infrequently emphasized by the GOP, made him a natural choice for Wednesday’s speech.

"He's got a great personal story,” said No. 2 Senate GOP leader John Thune of South Dakota. "He's very articulate at laying out kind of the Republican message, principles, agenda. I think he's a great voice for our party.”

"I've never been stopped from driving while Black. He has multiple times," said Sen. John Cornyn, R-Texas. "And he's sort of opened my eyes to some of the lack of trust" between minority communities and law enforcement.

Scott joined Haley in 2015 when she announced the removal of the Confederate flag from the State House following the 2015 Charleston church massacre, a decision that infuriated some conservatives. A white supremacist killed nine Black parishioners in that shooting.

Scott spoke out against some of Trump’s racially offensive remarks and actions. He said the president’s "moral authority” was compromised when Trump described "very fine people on both sides" after violence erupted between neo-Nazis and counter-demonstrators in Charlottesville, Virginia, in 2017.

Some Democrats say he doesn’t nearly use his unique perch in the GOP often or vigorously enough.

"It's one thing to speak out on issues of race,” said Antjuan Seawright, a South Carolina-based Democratic consultant. "But when you have the opportunity to do something about it, I think that you should take advantage of that, particularly when you are at the table."

Seawright also said GOP leaders "seem to come to” Scott when racial issues arise. "A Black man from the South. So you get those three things, that's like a political trifecta for Republicans.”

No. 3 House Democratic leader James Clyburn of South Carolina told reporters last fall that Scott and the House’s one Black Republican at the time "sounds like tokenism.”

But Tuesday, Clyburn told reporters that Scott’s selection to deliver the GOP response was a compliment and was good for their state, “irrespective of whether or not I agree with him.”

Scott has long championed vintage conservative ideas like tax breaks for companies investing in poor communities and federal aid that families could use for private schools. He has a solidly conservative voting record, backing Trump’s Supreme Court nominees and the failed drive to repeal President Barack Obama’s health care law.

Now, he’s in the middle of talks on legislation revamping police procedures that have drawn intense public attention. The House approved a Democratic package in March ending protections individual police officers have against civil lawsuits, which Republicans are resisting.

Both sides express optimism that they can resolve disputes soon. "History has its eyes on this moment," one negotiator, Sen. Cory Booker, D-N.J., told reporters.

"He's a good-faith actor, and he's also a Black man in America and knows a lot of these issues, personally," Booker said of Scott. "So if anybody can get it done on his side, he's the right person to be negotiating."