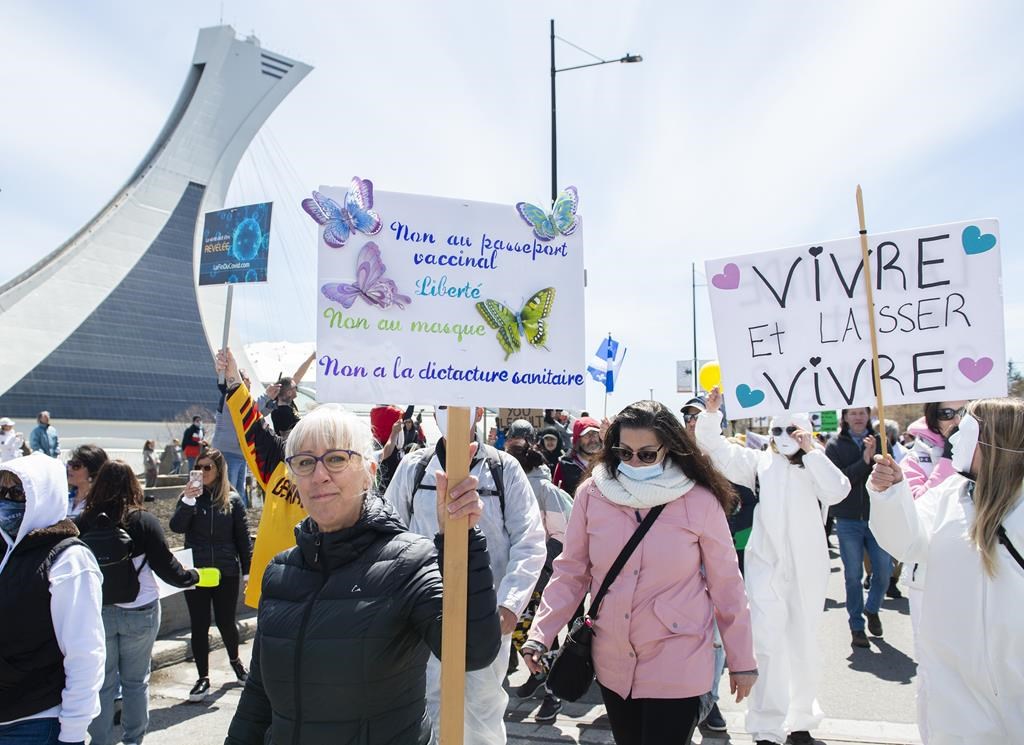 They gathered at Montreal’s Olympic Stadium, calling on the Quebec government to lift a nighttime curfew that has been in place in much of the province since January. They also expressed opposition towards the notion of immunity passports for those who have received a COVID-19 vaccine.

The stadium currently serves as one of the province’s COVID-19 mass vaccination clinics and was closed for the day due to the protest.

Daniel Pilon, one of the organizers, said in a Facebook video that the intention was never to block access to the vaccination centre and claimed that the protest was organized near the Olympic Stadium for its visual appeal.

The organizers said in a statement that Saturday’s protest was the first of several planned for the month of May.

Montrealer Mireille Rose was among the protesters and was loudly chanting Quebec Debout, the protest’s slogan.

“It means we want the people to stand up, our kids, our elders, men and women, to stand up for their rights,” said Rose. “What's going on in Quebec is a scam. We are being taken for granted and this has to change.”

An upbeat mood persisted throughout the event, with families and groups of friends walking peacefully while Montreal Police officers kept watch.

“If we exclude the non-respect of sanitary measures, it was a crowd that was quite peaceful and festive,” Couture said.

But by the end of the day, Montreal police reported the use of smoke bombs on a different crowd of more than a hundred people who started to be violent. Couture said the protesters threw rocks, cans and fireworks at the police and refused to leave the site.

Montreal police made a few arrests but were not immediately able to confirm the numbers.

While most protesters were intentionally not wearing masks, Montrealer Frank Simon was a rare exception.

Simon said he decided to don a face covering simply because there was a heavy police presence and he didn’t want to be fined for violating public health measures.

“If it were up to me, I wouldn’t wear it,” Simon said. “We are all exhausted to be in prison for the past year. Results are showing fewer cases and hospitalizations, so why are we still forced to remain isolated?”

Montreal mayor Valerie Plante tweeted during the protest that she was concerned to see such a demonstration taking place.

“Everyone wants to go back to a normal life, and the sanitary measures are there for that reason,” she tweeted.

Quebec reported 1,101 new COVID-19 cases and seven deaths attributed to the virus on Saturday, with one taking place in the past 24 hours.

Hospitalizations dropped for a fourth consecutive day, as authorities reported 14 fewer patients in hospital for a total of 578. the number in intensive care also declined by five to 159.

The province administered 62,406 doses of COVID-19 vaccine on Friday, and about 36.3 per cent of the population have now received a first shot.

“Hospitalizations are still declining and cases are relatively stable,” Health Minister Christian Dube wrote on Twitter. “We must continue our efforts to reduce cases and hospitalizations, even with the onset of good weather.”

Dube said respecting public health measures and getting vaccinated are the best weapons against the virus.

Quebec health officials reported a third case of a rare blood clot linked to the Oxford-AstraZeneca vaccine on Saturday.

The Health Department said the unidentified person remains hospitalized but is in stable condition.

Late last month, Francine Boyer, 54, died of a cerebral thrombosis in a Montreal hospital after receiving the AstraZeneca shot on April 9.

Dr. Horacio Arruda, Quebec’s director of public health, said in a statement the risks related to COVID-19 illness far outweigh those linked to the vaccine.

The province has said all adults will be able to book a vaccination appointment by mid-May.

Health authorities will open appointments to those 45 and older beginning Monday.

Quebec has now reported 350,874 infections and 10,933 deaths since the beginning of the pandemic. The province has 9,579 active cases.