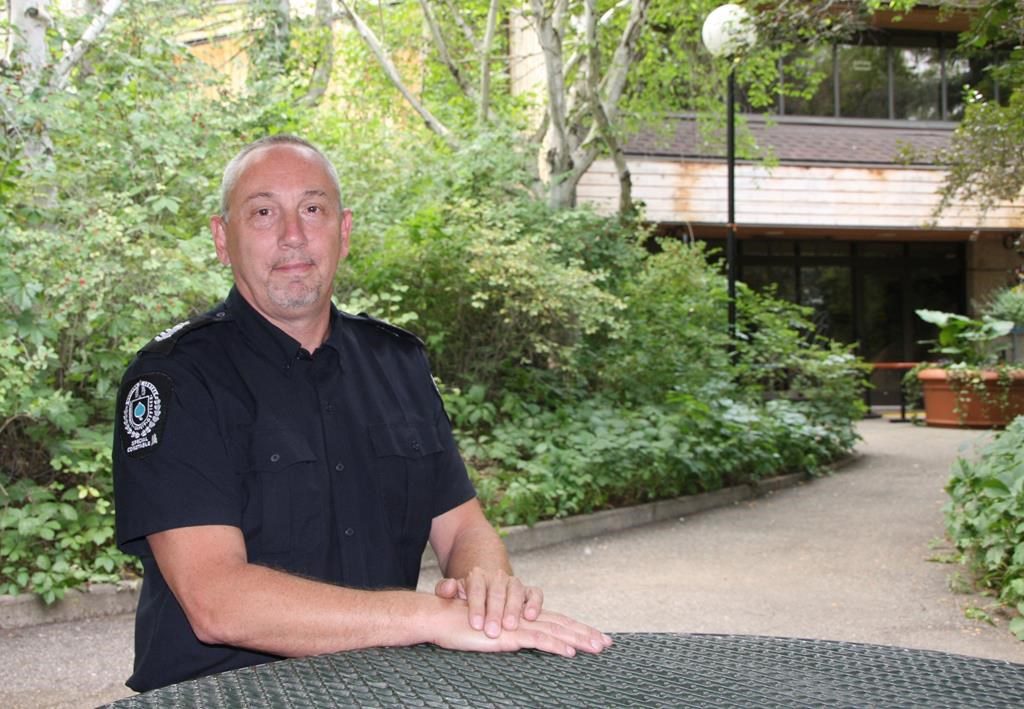 REGINA — A 900-hectare green space in the middle of a city can be a complicated place to police, so the Saskatchewan capital’s approach to safety in its showcase park uses an alternative to traditional law enforcement.

Wascana Park in Regina includes the legislature building, the University of Regina campus, museums, performance spaces, a lake and an extensive network of trails and walking paths.

Three community safety officers have been assigned to varied tasks in Wascana. Since the program began in May, they have become familiar figures. On a recent Wednesday afternoon bike patrol, seconds after leaving the office, two of the members are eagerly called over by children who want to show them a friendly goose.

A driver also waves them down to ask about some bicycles that seem to have been abandoned near the lake. The officers make sure the bikes are reunited with their owners. They then look for shopping carts and tents in the bushes to see if anyone is sleeping rough. On the way back, they practise wheelies to show off at the skate park.

Community safety officers, also known as public safety officers, are not new. Since 2001, dozens of Canadian cities have chosen to use them. Still, in 2021, Regina is one of many cities just starting to train and hire the officers.

They are not police officers, but have a minimum of six weeks training at SaskatchewanPolytechnic on behalf of the Corrections, Policing and Public Safety Ministry. Some have also received instruction at the Saskatchewan Police College or the RCMP National Training Academy, or have a background related to security or policing.

Sgt. Daryl Chernoff, who manages the program at Wascana Centre, says they are best-suited to “help along with local concerns; low-risk but high-priority items.” That includes traffic and bylaw enforcement in the park.

Chernoff says his officers also encounter “some of your issues of the big city.”

And because community safety officers are not part of the Regina Police Service — although they do collaborate — some park visitors feel more comfortable in their presence, Chernoff says.

“I believe for some people, we would be more approachable than a police officer for that reason — they don’t see us as police,” he says. “They see us as safety professionals.”

The focus is on “being visible so the public can see that we’re out there and it’s a safe place to spend their time.”

In the summer, that means frequent foot and bike patrols.

“You can actually … stop beside somebody, have a little chat with a family, things like that. There’s a lot of positive comments about the increased approachability of the officers.”

But some park visitors have concerns. Community safety officers may not be members of the police force, but they do wear uniforms and carry a baton, pepper spray and handcuffs.

Regina resident Jordan Taylor says her experience with law enforcement “wasn’t great” when she was fleeing domestic violence, and she worries the community safety officers’ uniforms and weapons will make it more difficult for other people in her situation to ask for help.

“When you’re in distress, seeing someone who has obvious weapons around their waist … is an aggravating factor more than it is a mitigating factor,” she says.

But Taylor is more positive about how other elements of the community safety program could have helped her when she needed it.

“Honestly, just the fact that they’re on bikes in the park helps a bit, because it doesn’t seem as aggressive as vehicles,” she says. “The little differences like that make a huge, huge difference in the way they interact with the public.”

This report by The Canadian Press was first published Aug. 2, 2021.