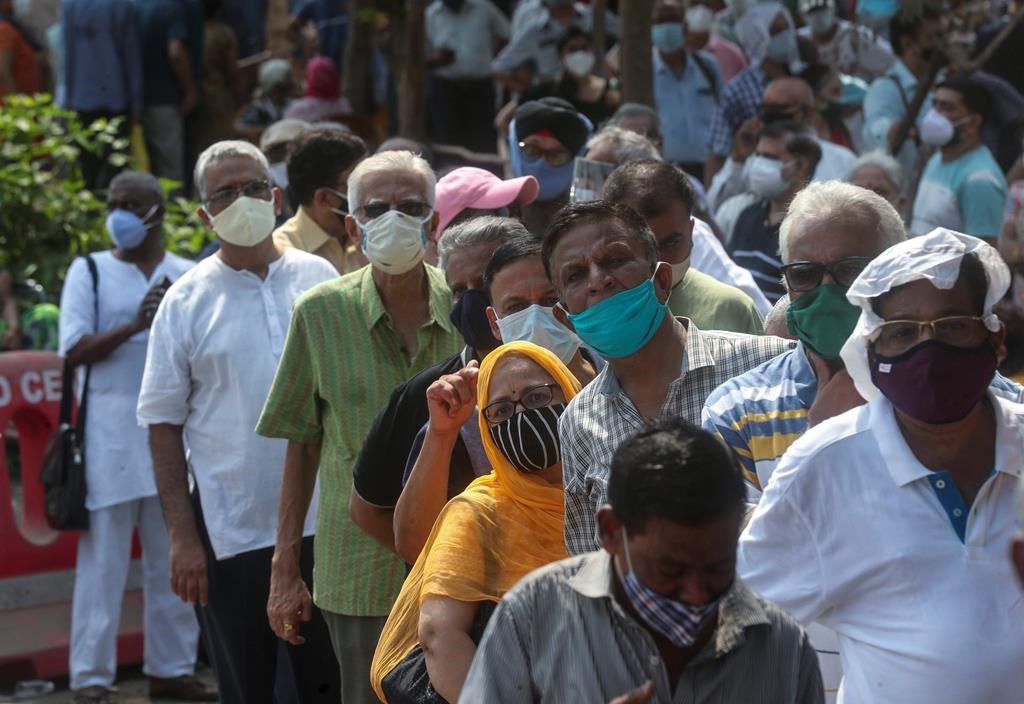 GENEVA â€” The head of the World Health Organization is calling the recent surge in coronavirus in India "beyond heartbreaking" and says the U.N. agency has dispatched critical supplies to the subcontinent, including thousands of portable oxygen machines that help patients breathe.

At a press briefing on Monday, WHO director-general Tedros Adhanom Ghebreyesus said the pandemic "continues to intensify" globally and that coronavirus infections have now risen for the ninth straight week, while deaths have increased for the sixth week in a row.

"There were as many cases globally last week as in the first five months of the pandemic," he said.

To address the crisis in India, Tedros said WHO has redeployed more than 2,000 staff to support the country's response on the ground and is helping authorities with efforts including vaccination. Among the supplies WHO has sent India are pre-made mobile field hospitals and lab supplies, he said.

â€” Italy's gradual reopening after six months of rotating virus closures is satisfying no one: Too cautious for some, too hasty for others

HERE'S WHAT ELSE IS HAPPENING:

The troops were summoned at the government's request after civilian authorities failed to implement the rules. Government officials say a nationwide lockdown will be necessary if the COVID-19 situation does not improve this week.

Pakistan is in the middle of the third wave of coronavirus infections, said Army spokesman Maj. Gen. Babar Iftikhar at a news conference.

Iftikhar's comments came hours after Pakistan reported 70 deaths from COVID-19 and 4,825 cases over the past 24 hours.

Police have arrested 177 people in the past 24 hours for violating the regulations, police spokesman Ajith Rohana said Monday.

Health officials have warned that a more contagious variant has been detected in Sri Lanka. For several weeks, the number of confirmed new cases was less than 300 daily. On Monday, the figure rose to 793.

MADRID â€” Spain’s famed bull-running festival in Pamplona is being cancelled for the second year in a row because of the pandemic.

Pamplona Mayor Enrique Maya cited a prevalence of coronavirus outbreaks, a high occupancy rate in hospitals and a slow rollout of vaccines for the decision.

"The festival cannot be organized overnight," Maya said Monday during a news conference. "This is very hard. I never thought that this could happen."

The nine-day festival in July â€” popularized by Ernest Hemingway's 1926 novel "The Sun Also Rises" â€” is Spain's most international event. Before last year's cancellation, it was last called off during the Spanish Civil War in the 1930s.

Spain has seen three major surges in infections since March of last year.

TOKYO â€” Japan will step up border controls at airports after health authorities found 21 cases of a coronavirus variant experts say could be more contagious.

Chief Cabinet Secretary Katsunobu Kato said Monday all but one of the 21 variant cases were detected in arrivals at Japanese airports.

The variant has been circulating in India, which is experiencing a record surge in virus cases. Experts fear the variant could worsen Japan's ongoing surge.

On Sunday, Japan also began emergency measures in Tokyo, Osaka and two of its neighbouring prefectures that include closing down bars, department stores and other nonessential businesses and requiring staying home until May 11.

It’s the third state of emergency in Japan in three months, and is raising questions about whether the country can safely host the Olympics this summer.

Kato said Japan will step up border controls and collect and analyze data on the variants to prevent the further spread of the infections.

THE HAGUE, Netherlands â€” The Netherlands is banning passenger flights from India, where coronavirus infections are surging to record levels.

The government says the ban goes into effect Monday evening and lasts until May 1. Flights carrying cargo and medical staff are exempt.

The Netherlands already has bans in place for flights from South Africa and nations in South America. About seven flights a week arrive in the Netherlands from India.

The Netherlands has pledged 1 million euros ($1.2 million) in aid to help India tackle the surge in infections.

Caretaker Minister for Development Cooperation Sigrid Kaag said it is "heart breaking to see the consequences of corona in India."

BANGKOK â€” Cinemas, parks and gyms were among the closed venues in Bangkok on Monday as Thailand sees its worst surge in coronavirus cases during the pandemic.

The restrictions came amid a shortage of hospital beds, along with a failure to secure adequate COVID-19 vaccine supplies, but did not include nationwide lockdowns, curfews or travel bans. Health care workers say stronger measures are needed to relieve overburdened hospitals.

The Thai capital has seen a rapid rise in infections since early April. On Monday, health authorities announced 2,048 new cases and eight deaths, bringing the totals to 57,508 cases and 148 deaths.

The latest measure aimed at curbing the spread of the virus is a fine of up to 20,000 baht ($636) for failing to wearing face masks in indoor and outdoor areas in 48 provinces including Bangkok.

Starting Monday, 31 types of venues in the capital, including cinemas, parks and gyms, were closed for two weeks, and gatherings of more than 20 people are banned. Shopping malls and department stores can open for limited hours.

Thailand also has banned the entry of visitors from India, with the exception of its own citizens. The ban takes effect May 1.

WASHINGTON â€” President Joe Biden says the U.S is determined to help India as it grapples with a surge in coronavirus cases.

In a tweet Sunday, Biden said, "Just as India sent assistance to the United States as our hospitals were strained early in the pandemic, we are determined to help India in its time of need."

The president didn't offer specifics in the brief message. But earlier Sunday the White House said the U.S. is "working around the clock" to immediately deploy to India drug treatments and rapid diagnostic testing kits. Also coming are ventilators and personal protective equipment, and the U.S. will seek to provide oxygen supplies as well.

The White House says it has identified sources of raw material urgently needed for India's manufacture of the Covishield vaccine. The U.S. also intends to pay for an expansion of manufacturing capability for the vaccine manufacturer in India, BioE, so it can ramp up and produce at least 1 billion doses of COVID-19 vaccines by the end of 2022.

PRAGUE â€” The Czech Republic is easing its tight coronavirus restrictions amid the decline in new infections in one of the hardest-hit European Union countries.

The government has decided that hairdressers, beauty and massage salons as well pet care providers will be among those allowed to reopen, starting May 3.

If new infections continue to decrease, the government is set to reopen all stores at the same time, with the final decision expected on Thursday.

The number of new cases per 100,000 citizens in last seven days was at 163 on Sunday. The easing is set to go ahead if that number drops to 100. That would also makes it possible for the elementary schools to fully reopen.

In neighbouring Slovakia, the restaurants are reopening on Monday for outdoor dining together with fitness centres after a decrease in new cases.

HONG KONG â€” Hong Kong and Singapore said Monday they would launch an air travel bubble in May, months after an initial arrangement that would allow tourists to fly between the cities without quarantining was postponed.

Flights will begin from May 26. Visitors will not have to go through the quarantine as long as they fulfil the conditions of travelling within the air travel bubble.

Hong Kong and Singapore had previously announced the launch of an air travel bubble in November last year but shelved the plan days before it was to start after Hong Kong saw a surge in COVID-19 infections.

The move comes as both Singapore and Hong Kong seek to boost tourism amid the pandemic, which has seen many countries restrict travellers from abroad.

ROME â€” Much of Italy is reopening after weeks of strict coronavirus lockdowns, with museums welcoming art lovers and bars and restaurants opening for outdoor dining.

Public transport in Rome and Milan was jammed, despite appeals for social distancing, as high schools began operating at least 70% in-person on Monday.

Restaurant workers who have been home for weeks got an early start setting up tables and sweeping cobblestones to welcome customers.

At Rome's Capitoline Museums, visitors had the place to themselves, without the tourists who usually overwhelm the museum and its picturesque piazza overlooking the Roman Forum.

Art student Giorgio Salemme said the reduced crowds were good for museum visitors: "We are avoiding the usual over-crowding where you see that everyone is trying to devour everything as quickly as possible without appreciating it."

WARSAW, Poland No-shows for COVID-19 vaccinations in Poland have been limited and are not affecting the country’s vaccination push, according to a Polish official.

A bigger problem is the delays in vaccine shipments, Dworczyk said. Around 1.1 million of the doses expected this week from vaccine producers will be delayed, likely until May, he said.

Poland, which has a population of around 38 million, has so far administered more than 10.3 million doses of the Pfizer-BioNTech, Moderna, AstraZeneca and Johnson & Johnson vaccines. Nearly 2.6 million people have been fully vaccinated.

ISTANBUL â€” Russia has signed an agreement with a Turkish biopharmaceutical company to begin producing its Sputnik V vaccine for COVID-19 in Turkey.

Viscoran Ilac aims to start production of the vaccine in the coming months in several facilities, according to a joint statement from the company and the Russian Direct Investment Fund.

Sputnik V uses the viral vector technology, can be stored in refrigerators and is given in two doses.

Turkey is currently using the Sinovac and Pfizer-BioNTech vaccines and has administered around 21.4 million doses. But the speed of vaccinations has slowed and infections have soared. A partial lockdown was reimposed earlier this month to fight the spread.