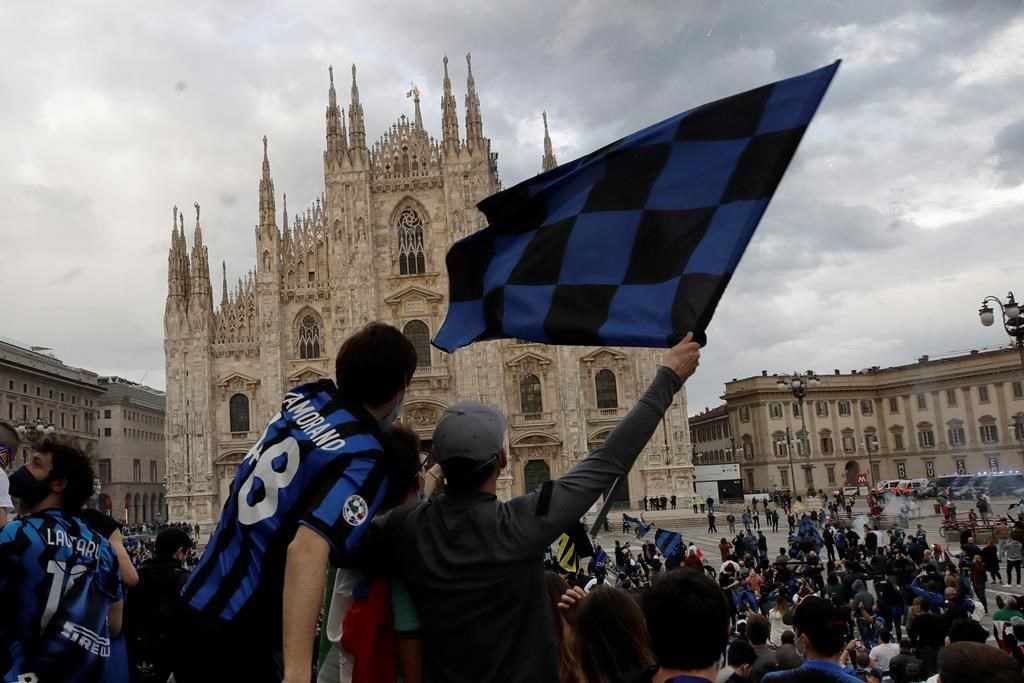 A sample of the doses will be tested for quality control before they are distributed around the country. Several more deliveries of the Pfizer vaccine are expected to arrive in the coming weeks as South Africa expects nearly 4.5 million doses of the vaccine by the end of June and it expects 30 million doses by the end of the year.

South Africa is also expecting delivery of 31 million doses of the Johnson & Johnson vaccine for its mass vaccination campaign which aims to inoculate 40 million of South Africa's population of 60 million people by February 2022.

â€” Russia lags behind others in its COVID-19 vaccination drive

HERE'S WHAT ELSE IS HAPPENING:

MILAN â€” Medical experts and politicians expressed concern Monday about a possible spike in virus contagion after thousands of jubilant soccer fans converged on Milan's main Piazza Duomo after Inter Milan claimed the Serie A title for the first time since 2010.

A crowd estimated at up to 30,000 people gathered in the heart of Milan Sunday, chanting and singing, setting off flares and fireworks, just a week after six months of virus restrictions began lifting in much of Italy. Many wore masks, but they were pulled down below their noses.

The head of Italy's national health council, Franco Locatelli, told SKY TG24 that such scenes need to be avoided during a pandemic that has claimed 121,000 dead in Italy.

Virologists expressed concern of a possible spike in two weeks, adding hopes that the vaccine campaign that has covered most over-70s will protect those most vulnerable to serious consequences of the virus.

Regional officials said it was impossible to control a crowd of that size while the province's top law enforcement official said they considered closing the large piazza but did not due to safety concerns of moving the crowd into smaller spaces with fewer exit points.

Denmark has already taken the AstraZeneca COVID-19 vaccine out of its vaccination program. Both the J&J and AstraZeneca shots are made with similar technology.

In a statement, the Danish Health Authority said it "has concluded that the benefits of using the COVID-19 vaccine from Johnson & Johnson do not outweigh the risk of causing the possible adverse effect."

MANILA, Philippines â€” Philippine President Rodrigo Duterte was injected with a COVID-19 vaccine from China on Monday, officials said. The Sinopharm vaccine used on the 76-year-old leader has not been authorized for wide emergency use in the country.

Presidential spokesman Harry Roque said Duterte got his first dose of the Sinopharm vaccine using a "compassionate use" permit issued by Manila's Food and Drug Administration.

Duterte said it took his doctor a long time to assess before deciding to immunize him with the jab from the Chinese state-owned vaccine maker. The president was accompanied by his former aide, now Sen. Christopher "Bong" Go, who said that Duterte wanted to be inoculated to encourage more Filipinos to receive the vaccine.

Duterte and his administration have come under criticisms for a vaccination campaign that has faced delays, supply problems and public skepticism. More than 1.5 million Filipinos have been injected so far with their first dose of Sinovac and and AstraZeneca vaccine, a tiny fraction of the 70 million Filipinos the government aims to vaccinate to curb coronavirus outbreaks.

The Hawaii Department of Health said there were no virus-related deaths, keeping the statewide total at 483 deaths, including 374 fatalities on Oahu.

Officials say the report includes cases reported to the department on Friday. Data from the Centers for Disease Control and Prevention shows more than 53% of the state's population has received at least one COVID-19 vaccine dose and 35% of the population is fully vaccinated.

AMSTERDAM â€” The European Union's drug regulator says it has begun evaluating a request by Pfizer Inc. and BioNTech to extend approval of their coronavirus vaccine to include children aged 12 to 15.

The European Medicines Agency said Monday that its human medicines committee will carry out an accelerated assessment of data submitted by Pfizer and BioNTech. It is expected to reach a decision in June, unless it requires extra information.

On Friday the two pharmaceuticals said their request is based on an advanced study in more than 2,000 adolescents that showed their vaccine to be safe and effective. The companies' vaccine is currently approved for use in people aged 16 years and older. Extending that approval to the younger age group could offer younger and less at-risk populations in Europe access to the shot for the first time.

Health Minister Carolina Darias told reporters that Spain is on track for its goal of vaccinating before the summer 70% of the adult population, or around 33 million people.

Vaccination centres are working seven days a week, Darias said, and by the first week of June some 10 million people will be fully inoculated.

Darias urged continuing caution. She said Spain's COVID-19 incidence rate per 100,000 people over 14 days â€” an important measure of the pandemic's spread â€” is 229 but varies widely between regions, with some lower than 70 and others in the range of 400-500.

KATHMANDU, Nepal â€” Nepal is halting all domestic and international flights because of spiking cases of COVID-19 in the Himalayan nation.

Prime Minister Khadga Prasad Oli said domestic flights would be stopped from Monday while all international flights would cease to fly in and out of Nepal from Thursday.

He appealed to other countries for vaccines, diagnostic equipment, oxygen and other supplies to help combat the pandemic.

India donated 1 million doses of vaccine followed by China providing another 800,000. However, India's ban on exporting vaccines has hindered Nepal's vaccine campaign, which began in January.

Nepal is still waiting for the 1 million doses from an Indian company which it already paid for in March.

STOCKHOLM â€” Sweden plans to donate 1 million doses of AstraZeneca vaccines to India via the U.N.-backed COVAX, an initiative devised to give countries access to coronavirus vaccines regardless of their wealth.

The Scandinavian country's International Development Cooperation Minister Per Olsson Fridh announced it Monday on Swedish broadcaster SVT, adding "we see how the pandemic is raging around the world. People are dying, poverty is spreading, and children are still not back at school."

"We need to do everything we can to face this pandemic and fight it across the world."

The donation will have no impact on the rollout in Sweden which has decided to only administer the AstraZeneca shots to people 65 and over.

The country's vaccine co-ordinator Richard Bergstrom said there are enough spare vaccines that Swedes can give away, adding "This is just a million … we actually have another 4 or 5 million more of Astra Zeneca's vaccine that we can share later."

PARIS â€” France's secondary and high schools have reopened and a ban on domestic travel has been lifted as part of the government's plan to gradually reopen the country.

The French are now allowed to go further than the 10-kilometre (six-mile) from home limit that has been applied for four weeks in efforts to slow down the spreading of the virus. A curfew from 7 p.m. until 6 a.m. is still in place.

Last week, President Emmanuel Macron has presented the key dates of the plan to move out of the country's partial lockdown, as numbers of infections and hospitalizations have started decreasing.

Restaurants and cafes will be able to serve customers outdoors at tables seating a maximum of six people starting May 19, when the nightly curfew will be pushed back to 9 p.m.

Nonessential shops also reopen, as well as cultural sites and sport facilities, which will have occupancy limits of 800 people indoors and 1,000 outdoors.

On June 9, tourists from abroad will be allowed to come to France on the condition they are vaccinated or can show a negative test. The final stage of the plan will see the end of the nighttime curfew and the lifting of most restrictions on June 30.

GENEVA â€” Moderna and vaccine promoter Gavi have announced a firm deal by which the pharmaceutical company will provide up to 500 million doses for the U.N.-backed program to ship coronavirus vaccines to needy people in low- and middle-countries by the end of 2022.

The advance purchase agreement announced Monday comes just days after the World Health Organization, after weeks of delays, announced an emergency approval for the Moderna vaccine that will pave the way for its rollout in the U.N.-backed COVAX program.

However, deliveries aren’t set to begin until the fourth quarter of this year, and the vast majority of the doses in the deal â€” 466 million â€” are planned for next year. The remaining 34 million are expected this year.

Many experts say the COVID-19 crisis is acute now, with India in particular facing an unprecedented surge in cases. The Moderna vaccine has generally been considered among the most effective so far in combating new variants, like one that is spreading in India.

Faisal Sultan, however, didn’t say from which country the vaccines will be purchased.

But Pakistan had mostly relied on vaccines donated by China until recently. Now, it is planning to purchase vaccines from China and other countries.

Pakistan is currently in the middle of another surge of infections which authorities say is more dangerous compared to previous ones.

SYDNEY â€” Australia has expanded its coronavirus vaccine eligibility to include all people 50 and older.

Until Monday, eligibility had been limited, in most cases, to people 70 and older, as well as those with frontline jobs or medical conditions.

Health authorities say AstraZeneca shots for those 50 and older will be available immediately at special clinics, although people will have to wait another couple of weeks before they can get the shots at the clinics of their regular doctors.

Australia's vaccine rollout has been running far behind schedule, in part because Europe temporarily blocked some vaccine exports. About 2.3 million vaccine doses have been administered among Australia's population of 26 million.