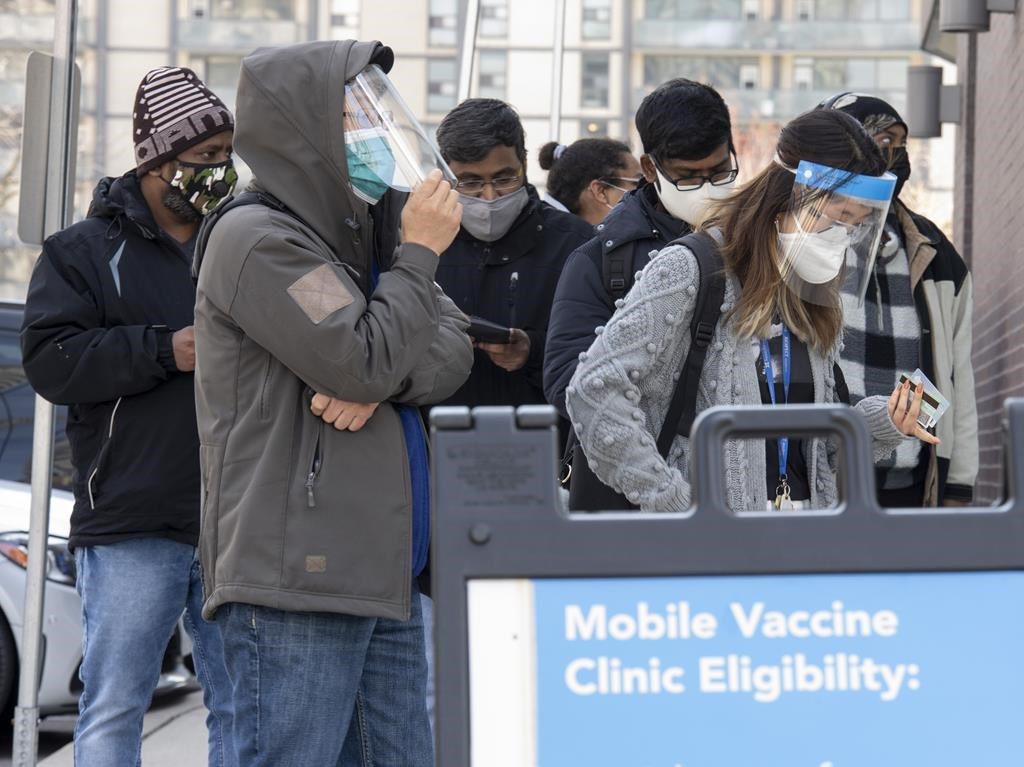 Nunavut is reporting its first cases of the novel coronavirus variant first identified in the United Kingdom.

Chief public health officer Dr. Michael Patterson says 21 samples have come back from a laboratory and are all positive for the variant known as B.1.1.7.

He says although the variant may spread more quickly than the original virus, the Moderna vaccine â€” the only vaccine available in Nunavut â€” is effective against it.

Manitoba is expanding its COVID-19 vaccination priority program to include all adults in the northern health region and in the Seven Oaks West neighbourhood in Winnipeg.

Anyone 18 years old and up who doesn’t live in those areas but who works there in certain public-facing jobs such as teachers, grocery store workers and childcare staff can also get a shot.

Tyler Shandro says on Twitter that COVID-19 vaccines will be offered to 15,000 workers at 136 federal and provincial meat-packing plants starting this week.

He says the inoculations will be done at a combination of on-site and community locations.

Plans for a vaccination clinic at Cargill’s beef slaughterhouse south of Calgary were put off last week.

Quebec is reporting 889 new cases of COVID-19 today and eight more deaths attributed to the novel coronavirus, including one in the past 24 hours.

Health officials say hospitalizations rose by 10, to 664, and 167 people were in intensive care, a rise of two.

He said today that Canada should “perhaps” go as far as to stop all international flights “until we can rectify and secure our border.”

The Public Health Agency of Canada says 100 flights landed in the country between April 11 and April 22 carrying at least one passenger who tested positive for COVID-19 after landing.

Ontario is reporting 3,510 new cases of COVID-19 today and 24 more deaths attributed to the novel coronavirus.

Health Minister Christine Elliott says there are 1,015 new cases in Toronto, 909 in Peel Region and 391 in York Region.

The Health Department says 2,271 people are in hospital with COVID-19, but notes that more than 10 per cent of hospitals did not submit data over the weekend and that number will likely go up when those reports are received.

There are 877 COVID-19-related patients in intensive care and 605 are on ventilators.

Fifty-eight of the new cases are in the central health zone that includes Halifax, while there are five in the eastern zone, two in the western zone and one in the northern zone.

The province now has 323 confirmed active cases of COVID-19.