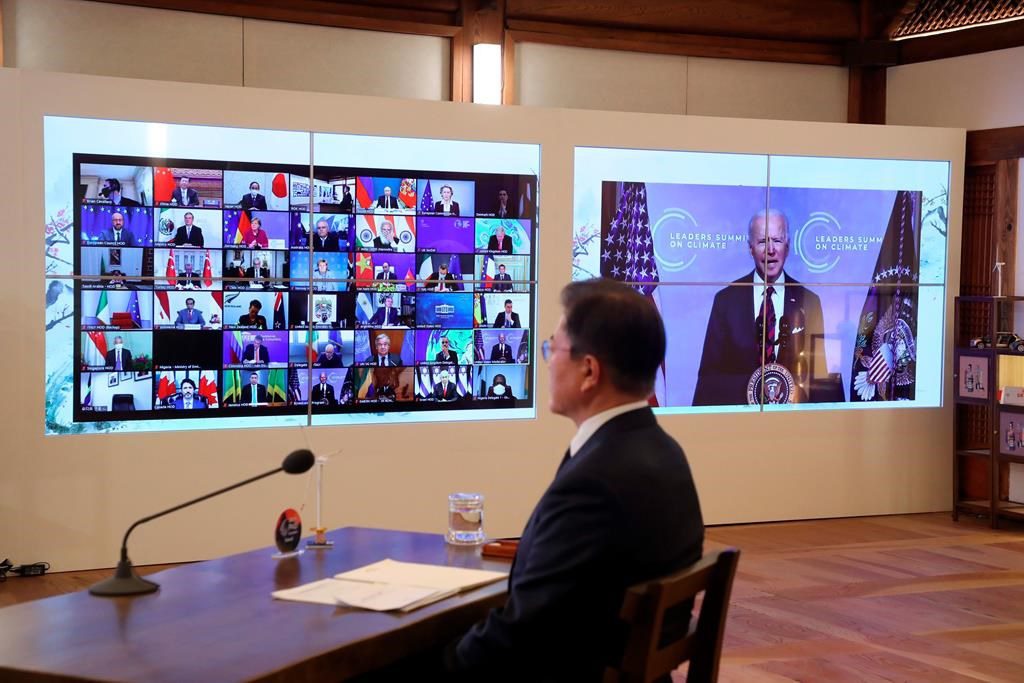 The mayors of a dozen major U.S. cities, including Los Angeles, New York City and San Diego, are asking President Joe Biden to consult them as the administration studies how to identify and resettle people displaced by drought, rising seas and other effects of climate change.

The request was made in a letter sent to Biden on Thursday, the same day his administration convened a summit of world leaders to discuss taking action to curb greenhouse gas emissions.

No nation offers protection to people specifically displaced because of climate change. Biden issued an executive order Feb. 4 ordering national security adviser Jake Sullivan to consult federal agencies on how to do that and issue a report in August.

The mayors say they should be consulted as well since cities are on the frontlines of receiving most of the migrants, refugees and others displaced by storms, drought and other effects of global warming. The mayors of Chicago, Pittsburgh, Denver, Miami and Houston also signed the letter.

According to a World Meteorological Organization report released Monday, climate change has produced an average of 23 million refugees a year since 2010. Nearly 10 million were recorded in the first six months of last year. Most moved within their own country.

HERE'S WHAT YOU NEED TO KNOW ABOUT THE GLOBAL CLIMATE SUMMIT:

Saying the United States and other big economies "have to get this done," President Joe Biden opened a global climate summit aimed at getting world leaders to dig deeper on emissions cuts.

â€” What to Watch: In Biden climate show, look for cajoling, conflict, pathos

HERE’S WHAT ELSE IS GOING ON:

Pope Francis is urging participants in the U.S.-hosted global climate summit to ensure that the post-pandemic world is cleaner, purer and preserved.

Francis delivered a short video message Thursday to the summit, praising the initiative. He said: "I wish you success in this beautiful decision to meet, walk together going forward, and I am with you all the way."

Francis has made his environmental appeal a hallmark of his papacy, denouncing how wealthy countries have plundered God's creation for profit at the expense of poor and indigenous people.

In his message, Francis said the coronavirus pandemic has provided world leaders with an opportunity to come out better than before. He said: "And our concern is to see that the environment is cleaner, more pure and preserved."

Thunberg was one of several activists and policy experts who testified at the hearing, convened by Rep. Ro Khanna, a California Democrat who chairs the environment subcommittee.

After livestreamed remarks by dozens of world leaders at the U.S.-hosted global climate summit, the conversation has turned to money.

President Joe Biden says, "Good ideas and good intentions aren't good enough." He says, "We need to ensure that the financing will be there."

Biden says combatting climate change will require mobilizing finance on an unprecedented scale. He says the U.S. on Thursday would announce an international climate finance plan, involving not only governments but also the private sector. He calls on Wall Street to join the climate fight.

Biden says investing in green businesses isn't a drain on the economy but an opportunity. He says climate change "is more than a threat" and presents the largest opportunities for job creation in the future.

Brazil's President Jair Bolsonaro has shifted his tone on preservation of the Amazon rainforest at the U.S.-led climate summit, exhibiting willingness to step up commitment even as many critics continue doubting his credibility.

Bolsonaro said Thursday he agrees with U.S. President Joe Biden's "call for the establishment of ambitious commitments." Brazil's leader says he is "determined that our climate neutrality will be reached by 2050."

Bolsonaro also said he would double the amount of money for environmental authorities' oversight. It's unclear how that reconciles with immediate spending, as the 2021 budget outlook for the environment ministry is the lowest for any year this century.

The speech shows Bolsonaro's administration realizes it needs to at least start talking the talk in the face of international and domestic pressure.

Dan Wilkinson runs Human Rights Watch's environmental program and says this is "a different tone from the Bolsonaro who was in complete denial two years ago." Wilkinson says it's "going to be hard for anyone to take it seriously."

Last week a group of 15 U.S. senators penned a letter to Biden complaining of Bolsonaro's woeful environmental track record and urging the U.S. to condition any support for Amazon preservation on significant progress reducing deforestation.

Youth activist Xiye Bastida has told world leaders the climate crisis is the result of powerful people like them who are "perpetuating and upholding the harmful systems of colonialism, oppression, capitalism and market-oriented brainwashed solutions? to global problems.

In a hard-hitting speech Thursday at the virtual climate summit, the Mexican teenager said solutions to global warming "must be aligned with the fact that climate justice is social justice.?

She says current economic and political systems "rely on the existence of sacrifice zones" that "target the global South and Black and brown communities to the global North."

She says instead of just talking about climate change, world leaders "need to accept that the era of fossil fuels is over." She demands an immediate transition to renewable energy worldwide and an end to fossil fuel subsidies and infrastructure, including new pipelines.

The 19-year-old Bastida is a leader of Fridays for Future, an international youth movement that includes Swedish activist Greta Thunberg. Thunberg spoke to the U.S. Congress at a separate event.

In his speech, Putin urged "broad and effective international co-operation in the calculation and monitoring of volumes of all types of harmful emissions into the atmosphere."

Putin said Thursday, "Russia is genuinely interested in galvanizing international co-operation so as to look further for effective solutions to climate change as well as to all other vital challenges."

Putin says Moscow is ready to offer a number of joint projects and consider preferences for foreign companies willing to invest in clean technologies, including those in Russia.

The Russian leader says he has tasked the government to "significantly cut the accumulated volume of net emissions" by 2050 in Russia, refraining from naming a concrete goal.

As host of COP-26, Johnson said Thursday at President Joe Biden's climate summit he wanted to see "similar ambitions" around the world.

Johnson says, "I think we can do it. To do it we need scientists in all of our countries to work together to produce the technological solutions that humanity is going to need."

He says the developed world will have to find more resources to support developing countries' move to a greener future. He says, "It's going to mean the richest nations coming together and exceeding the $100 billion commitment they already made in 2009."

Johnson stresses the economic dividend that could emerge from efforts to tackle climate change.

South Korean President Moon Jae-in says his country will no longer finance the construction of coal power plants in other nations as he promises stronger contributions to international efforts to curb global warming.

In a virtual climate summit convened by President Joe Biden on Thursday, Moon said his country will provide a more ambitious target for reducing carbon emissions by the end of the year. South Korea in December had announced a 2030 target to cut its carbon emissions by 24.4% from the country's 2017 level.

South Korea has faced international criticism for its continued investment in coal plants in other countries even as it pushes to phase out coal power at home.

Moon's office says his pledge doesn't affect South Korea's participation in ongoing projects to build two new coal plants in Indonesia and another one in Vietnam.

Speaking from their home countries, the world leaders pledge action to lower carbon emissions, although they differ on details.

Japan's Prime Minister Yoshihide Suga emphasized the global nature of the event, saying, "Good morning, good afternoon and good evening, everyone." He was speaking at nearly 10 p.m. in Japan and in the morning on the U.S. East Coast.

British Prime Minister Boris Johnson says the effort "is not bunny hugging" but is about growth and jobs â€” and the survival of the planet.

Merkel calls the battle against climate change "a huge task."

Putin's remarks came after French President Emmanuel Macron began but had technical difficulties. Putin boasted that his country has significantly reduced its carbon emissions and will met an ambitious goal for 2050. Then Macron spoke again.

Narendra Modi told world leaders at a virtual summit called by Biden on Thursday that India is doing its part and its renewable energy target of 450 gigawatts by 2030 shows its commitment to clean energy. India also has taken several bold steps in promoting clean energy, energy efficiency, afforestation and biodiversity.

Modi says India has taken the lead in multilateral initiatives, such as the International Solar Alliance and the coalition of disaster resilient infrastructure.

Modi says India's per capita carbon footprint was 60% lower than the global average because of its lifestyle, which is still rooted in sustainable traditional practices.

Xi spoke at the global climate summit hosted by the United States on Thursday. He says, "We must be committed to green development. To improve the environment is to boost productivity."

He says, "We must be committed to the principle to common but differentiated responsibilities."

Xi emphasizes that China is aiming to move from peak carbon to net zero in a short time period – just 30 years, or the span of one generation.

United Nations Secretary-General AntÃ³nio Guterres says the world is "at the verge of the abyss" because of climate change and must take aggressive steps to avoid catastrophe.

Speaking at a global virtual summit on climate change Thursday, Guterres called for world leaders to build a global coalition for net-zero carbon emissions by 2050 â€” "every country, every region, every city, every company and every industry.?

Guterres says the next decade must be one of transformation, with major polluters such as the United States and other advanced countries submitting detailed, ambitious plans to slow climate change.

Guterres says countries around the world must put a price on carbon, end subsidies for fossil fuels, ramp up investments in renewable energy and green infrastructure and stop the financing of coal and the building of new coal power plants.

He calls for advanced countries to phase out coal by 2030, with other countries phasing it out by 2040.

For the first few minutes, during nearly all of Vice-President Kamala Harris' introduction of President Joe Biden, praising his history of climate advocacy, every word echoed. Echoed.

Then when Biden came on, the video and the audio were out of sync, while he urged the world "to move now" on what he called "the climate crisis."

United Nations Secretary-General Antonio Guterres calls the problem "an existential threat" and says the world is "on red alert."

Biden says this is the "decisive decade." He says, "This is the decade we must make decisions that will avoid the worst consequences of the climate crisis."

Biden says the richest economies "have to step up."

The Biden administration has opened a global climate summit including 40 world leaders.

President Joe Biden is pledging to cut at least in half the climate-wrecking coal and petroleum fumes that the U.S. pumps out. That's a commitment Biden hopes will spur China and other big polluters to speed up efforts of their own.

Former Vice-President Al Gore praised the pledge on Thursday, saying, "Today President Biden showed that his administration is up to the task of tackling climate change."

The two-day summit will include China's Xi Jinping, Russia's Vladimir Putin and the pope and will be livestreamed.