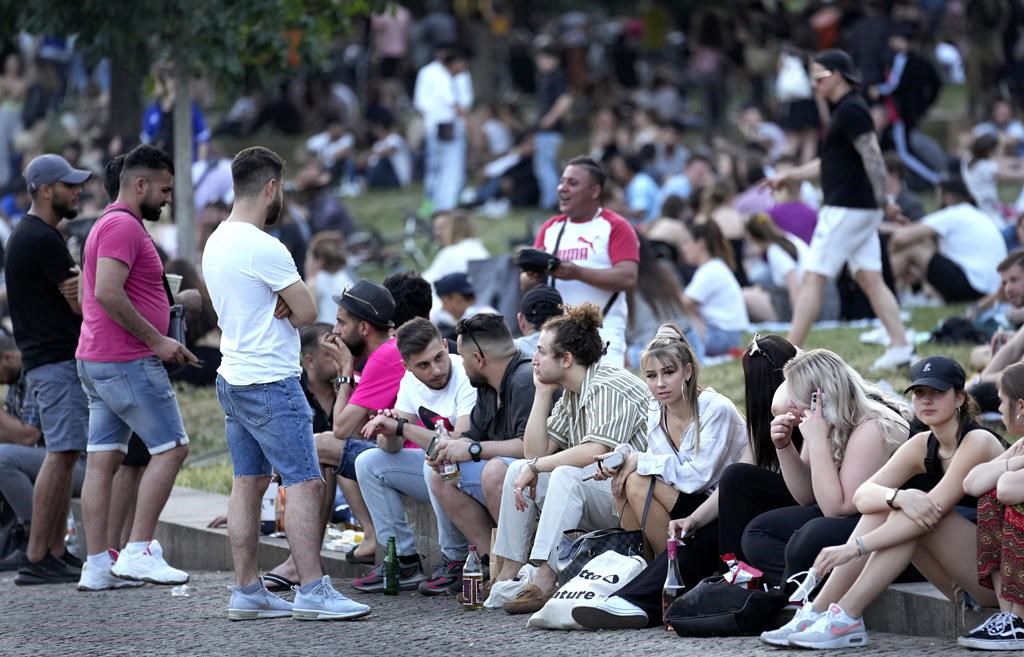 BERLIN — Germany has recorded its lowest number of new daily coronavirus infections in nearly nine months, and officials are floating the possibility of loosening mask-wearing rules.

The Robert Koch Institute, the national disease control center, said Monday that 549 new cases were reported over the previous 24 hours. It’s the first time since Sept. 21 that the figure has been under 1,000, though it’s typical for numbers over the weekend to be relatively low because fewer tests are conducted and reported.

Germany has reported more than 3.7 million cases since the pandemic began. Another 10 deaths brought the country’s toll to 89,844.

Infection figures have declined sharply in recent weeks and a discussion has started about the future of mask-wearing rules. Health Minister Jens Spahn told the Funke newspaper group that a step-by-step approach should be taken, with rules to wear them outdoors lifted first. He said they could be dropped “little by little” indoors in areas with very low infections and high vaccination rates.

TOKYO — Japanese Prime Minister Yoshihide Suga said he felt reassured by other Group of Seven leaders showing “firm support” to his determination to host the Tokyo Olympics next month.

Suga told reporters while in Britain for the G-7 Summit that he explained to other leaders Japan’s commitment to ensure through virus control measures that the Games would be safe and secure.

“I’m feeling reassured by the firm support I received from all the other leaders,” Suga said Sunday before heading back to Tokyo. “I have renewed my determination to make the Tokyo Games a success at any cost.”

With the Olympic coming up in about 40 days, Tokyo and other Japanese metro areas are under a state of emergency because of the number of infections and the resulting pressure on medical systems. Japan’s vaccinations are beginning to pick up, but less than 5% percent of population was fully vaccinated through last week.

Suga is expected to decide later this week whether to extend or lift the emergency measures in Tokyo and other areas that are set to end on June 20.

BEIRUT — Lebanon has vaccinated a daily record of people against COVID-19, raising its total shots administered past 1 million.

The Health Ministry said nearly 23,000 people were vaccinated on Sunday alone on the third weekend of a COVID-19 vaccination “marathon” to speed up inoculations.

The ministry invited all residents who are 53 and older as well as people with special needs who are 16 and older to get Pfizer-BioNTech shots.

Lebanon, a small country with a population of 6 million including 1 million Syrian refugees, has registered more than 542,000 cases of coronavirus infection and nearly 7,800 deaths since February 2020.

Lebanon began a vaccination campaign in February and so far 317,000 have received two shots and nearly 684,000 have taken one shot.

CARBIS BAY, England — British Prime Minister Boris Johnson says Britain wants further investigation into the origins of the COVID-19 pandemic, but that at the moment the country doesn’t believe it came from a lab.

Speaking at the end of the Group of Seven summit in southwest England, Johnson says that while it doesn’t look as if this particular disease came from a lab, the world needs to “keep an open mind.”

Though the notion was once dismissed by most public health experts and government officials, the hypothesis that COVID-19 leaked accidentally from a Chinese lab is now under a new U.S. investigation ordered by President Joe Biden.

The G-7 leaders endorsed calls for a “timely, transparent, expert-led, and science-based” further investigation into the origins of the coronavirus.

Many scientists still believe the virus most likely jumped from animals to humans.