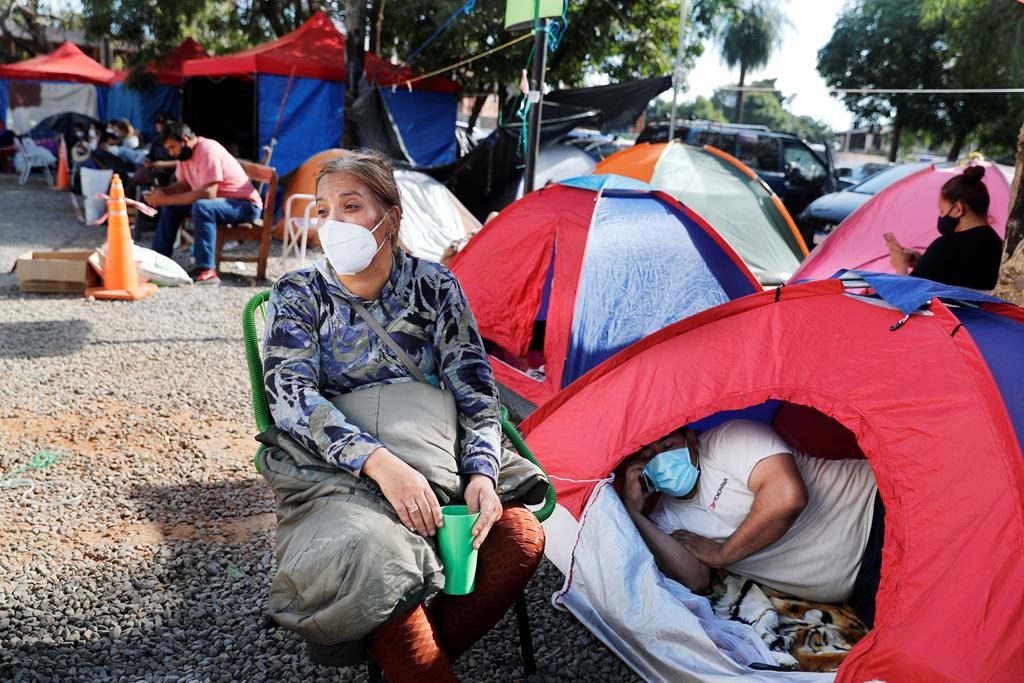 TAIPEI, Taiwan — After a slow start, China is administering shots at a staggering pace.

In just five days last month, China gave out 100 million shots of its COVID-19 vaccines. The rollout is far from perfect, including uneven distribution, but Chinese public health leaders still hope to inoculate 80% of the population of 1.4 billion by the end of the year.

So far, China had given out more than 680 million doses. That’s about one third of the 1.9 billion shots distributed globally. The call to get vaccinated comes from every corner of society. That pressure underscores both the system’s strength and the risks to civil liberties.

In the capital of Beijing, 87% of the population has received at least one dose. Getting a shot is as easy as walking into one of hundreds of vaccination spots found across the city. Vaccination buses are parked in high foot-traffic areas, including in the city center and at malls.

But Beijing’s abundance is not shared with the rest of the country. There are reports of difficulty getting an appointment elsewhere.

— Slow to start, China mobilizes to vaccinate at headlong pace

— Do I need to get tested for COVID-19 if I’m vaccinated?

ISLAMABAD — Pakistan officials say they’ll use the first batch of over 100,000 doses of the Pfizer vaccines received by it under the COVAX facility to inoculate oversees students, pilgrims and workers traveling to the countries that don’t recognize vaccination certificates of Chinese vaccines.

He hoped that Pakistan will receive more doses of the Pfizer vaccine. So far, Pakistan has mainly relied on vaccines imported from China.

Umar’s comments came hours after Pakistan reported 90 single-day deaths from the coronavirus in the past 24 hours amid declining infections. Pakistan has registered 926,695 confirmed cases and 21,022 confirmed deaths.

BEIJING — Fifteen more COVID-19 cases have been reported in the southern Chinese province of Guangzhou, with a report saying the coronavirus variant in the latest outbreak is more transmissible than in previous clusters in the country.

The city of Guangdong has locked down neighborhoods and requires anyone wishing to leave the province to show a negative virus test taken within the past 72 hours.

Respected business magazine Caixin quotes the chief infectious disease specialist at the hospital in Guangzhou where the latest cases are being treated as saying the patients are carrying a heavier viral load than in past, making it easier to pass the virus to others.

Guangdong, which borders on Hong Kong, has reported around 50 cases as of Thursday.

LOS ANGELES — The state of California has agreed to pay more than $2 million in legal fees in a settlement with churches that challenged pandemic closure orders.

Church lawyers who successfully took their appeal to the U.S. Supreme Court said Wednesday that the state has agreed not to impose restrictions on houses of worship that are more stringent than those for retail businesses.

Newsom’s office says the governor put the health of Californians first and the settlements provide clarity on how public health standards can be applied to churches.

UNITED NATIONS — The International Labor Organization says the COVID-19 pandemic has created an “unparalleled” global labor market crisis that will affect the job market for years.

The U.N. agency said in a report Wednesday an estimated 8.8% of total working hours were lost last year. It says that is “the equivalent of the hours worked in one year by 255 million full-time workers.”

The Geneva-based agency estimates that if there had not been a pandemic, the world would have created 30 million new jobs in 2020.

It says that this year, working hours lost corresponded to 140 million full-time jobs in the first quarter and 127 million in the current quarter.

The agency projects that an uneven economic recovery expected to begin in the second half of 2021 will create 100 million jobs this year and an additional 80 million in 2022. It says that is still short of pre-pandemic levels.

DENVER — Colorado will give $50,000 scholarships to 25 students who have received coronavirus vaccinations in another incentive to get as many state residents vaccinated as possible.

Gov. Jared Polis said Wednesday that Colorado resident students ages 12 to 17 who have received at least one vaccine dose are eligible.

The Denver Post reports that those chosen in random drawings starting Monday can use their scholarships in the post-secondary educational institution of their choice, both inside and outside Colorado.

Polis previously unveiled a lottery to reward a total of five vaccinated residents $1 million each to promote coronavirus vaccinations. Money for the scholarship and lottery programs comes from federal coronavirus relief funds.

That’s according to scientists, who are finding clues in how the body remembers viruses. But they say more research is needed and that virus mutations are still a wild card.

Critical studies are underway, and evidence is mounting that immunity from the mRNA vaccines made by Pfizer and Moderna doesn’t depend exclusively on antibodies that dwindle over time. The body has overlapping layers of protection that offer backup.

Scientists do not yet know what’s called the correlate of protection, the level below which antibodies cannot fend off the coronavirus without additional help. Dr. Anthony Fauci, the U.S. government’s leading infectious disease expert, told a Senate subcommittee last week that vaccine protection would not be infinite.

Pfizer and Moderna officials have said people might need yearly shots, just like with flu vaccinations. The companies plan to have some candidates ready this fall. But companies won’t decide when boosters get used. That’s up to health authorities in each country. Some experts say boosters may be needed only every few years.

SANTA FE, N.M. — Each of New Mexico’s 33 counties is now operating in the least-restrictive category when it comes to pandemic-related health mandates.

Absent the order, five counties would have slipped back into the more restrictive yellow category. Health officials reported an average of fewer than 100 cases each day over the long holiday weekend.

Lujan Grisham plans to end the state’s color-coded risk system at the end of the month as long as 60% of residents are fully vaccinated.

TORONTO — Canada’s most populous province says schools will not reopen for in-person learning for the rest of the academic year.

Ontario Premier Doug Ford says returning kids to schools will lead to thousands of news cases. He says schools will keep teaching students online this month. Schools across the province moved learning online in mid-April amid an escalating third wave of the coronavirus.

Cases have since declined and the province recently unveiled a reopening plan set to take effect in mid-June, but schools weren’t part of it.

The province’s top doctor, along with the vast majority of his regional counterparts and other experts, have said students should return to classrooms for their well-being. Ford sought advice on the matter last week and has spent the past few days coming up with his decision.

CHELSEA, Mass. — Getting a coronavirus shot in Massachusetts could save residents a few dollars off their grocery bills, Gov. Charlie Baker announced Wednesday.

Starting Thursday, shoppers who get their vaccine at clinics set up outside one of a select few Market Basket supermarkets in the state will get a $25 store gift card, the Republican governor said at a news conference in Chelsea.

“We know these are convenient community locations. They’re very heavily traveled, as anybody who’s ever been to one knows,” Baker said.

The mobile vaccine clinics will be set up at Market Basket stores in Chelsea, Fall River, Lawrence, Lynn and Revere, some of the communities that suffered most during the pandemic. No appointments are necessary. Shots will be available Thursday, Friday and Saturday and again on June 10 to 12.

The announcement came just three days after 18-year-olds began getting vaccinated. France’s vaccination campaign got off to a slow start but is moving full speed ahead. More than 40% of the population has received at least one injection.

Numbers of COVID-19 cases have fallen dramatically in recent weeks, along with deaths, leading to what Macron called “reasonable optimism” for the future as the nation reopens in phases. Outdoor café terraces opened last month and a nightly curfew was moved from 6 p.m. to 7 p.m. In one week, the curfew will start at 11 p.m., when restaurants can seat clients indoors, with limits.

MADRID — Spain’s government and regional authorities have agreed to allow some bars and night clubs to reopen, 10 months after they closed nationwide due to the COVID-19 pandemic.

Authorities want coordinated national rules for easing lockdown restrictions over the summer. The new rules on re-openings hinge on regions’ coronavirus case rate per 100,000 population over 14 days and the number of available beds in local hospitals.

Health Minister Carolina Darias says low-risk regions could open their bars until 2 a.m. with 50% of indoor capacity. Patrons can consume food and drink only when seated, and bar owners must note the contact details of patrons in case of a later outbreak.

In higher risk regions, bars must remain closed. Currently, about half of Spain’s 17 regions meet the criteria for reopening bars and discotheques.

Spain’s virus incidence rate per 100,000 population over 14 days — a key pandemic metric— is 118. Darias says one in five Spaniards have had both doses of a COVID-19 vaccine. New deaths reported Wednesday took the country’s total to just over 80,000.

The statewide mask mandate ended May 14 shortly after the Centers for Disease Control and Prevention recommended that fully vaccinated people no longer needed to wear masks.

LONDON — British health officials say three-quarters of the U.K.’s adult population has received at least one dose of a coronavirus vaccine.

Figures released Wednesday show 75.2% of all people 18 and over have received a shot, and 49.5% have received both doses. Britain is racing to vaccinate all adults and curb a possibly more contagious variant that was first identified in India and is spreading across the U.K.

Health Secretary Matt Hancock says reaching the milestone less than six months after the first shot given in the U.K. on Dec. 8, was “an incredible step forward.”

Speaking as the U.K. hosted an international meeting to encourage vaccination, Hancock says a key to the high level of vaccine acceptance in the U.K. was ensuring the process was fair, by giving vaccines first to the elderly and those at most risk.

He says, “We Brits love queuing and there’s nothing more upsetting than someone jumping the queue.”