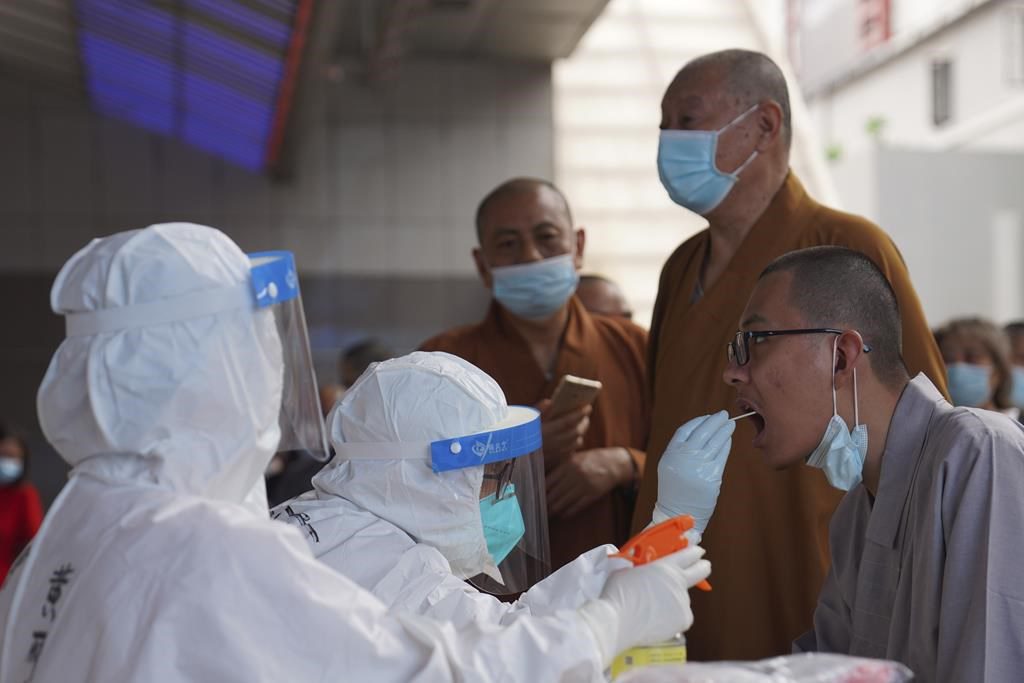 Victoria state began a seven-day lockdown on Friday due to a cluster in its capital Melbourne.

A second staff member and a 90-year-old resident of the Arcare Maidstone Aged Care facility in Melbourne were among the new infections. The first infected staff member was reported on Sunday.

The second staff member had also worked at the BlueCross Western Gardens nursing home in Melbourne last week and had not been vaccinated.

The BlueCross facility has gone into lockdown after the news.

The vast majority of Victoria‘s 820 coronavirus deaths have been in nursing homes.

BEIJING — China on Monday re-imposed anti-coronavirus travel controls on its southern province of Guangdong, announcing anyone leaving the populous region must be tested for the virus following a spike in infections that has alarmed authorities.

Guangdong, which borders Hong Kong, recorded 20 new confirmed cases, all contracted locally, in the 24 hours through midnight Sunday. Guangdong’s numbers are low compared with many places in the world, but the rise has rattled Chinese leaders who thought they had the disease under control.

People leaving Guangdong by plane, train, bus or private car after 10 p.m. on Monday must present results of a nucleic acid test within the past 72 hours, the provincial government announced. It said testing stations for truck drivers would be set up on major roads.

The government of the provincial capital, Guangzhou, a business center of 15 million people, ordered mass testing after locally acquired infections were found beginning May 21. The government said 700,000 people had been tested through last Wednesday.

HANOI, Vietnam — Vietnam plans to test all 9 million people in its largest city for the coronavirus and imposed more restrictions Monday to deal with a growing COVID-19 outbreak.

People in Ho Chi Minh city are only allowed to leave home for necessary activities and public gatherings of more than 10 people are banned, the government announced. Prior to the order, the city, also Vietnam’s economic hub, shut down non-essential business last Thursday when cases started to increase.

State newspaper Vietnam News said the city authority is planning to test its entire population with a testing capacity of 100,000 samples a day.

The newspaper also said police had filed a case Sunday against the head of a Protestant church mission for “spreading dangerous infectious diseases” citing poor health protocols applied at the premises.

BERLIN — The German government is following up on media reports that coronavirus test centers across the country have overbilled authorities for the number of tests taken.

Germans are allowed one free “citizen’s test” per week to check if they are negative for coronavirus. They can use the result to be able to dine at outside restaurants, go shopping or visit cultural institutions.

In recent weeks, thousands of antigen tests centers for have popped up everywhere in cities and towns in empty store fronts, closed dance clubs or community centers. Several media have reported that test center operators are illegally billing for more tests than they actually take.

German Health Minister Jens Spahn tweeted Saturday that “anybody who uses the pandemic to enrich himself should be ashamed.” He noted that prosecutors in the western city of Bochum were investigating some suspected cases of fraud, but said that most providers were doing a professional job.