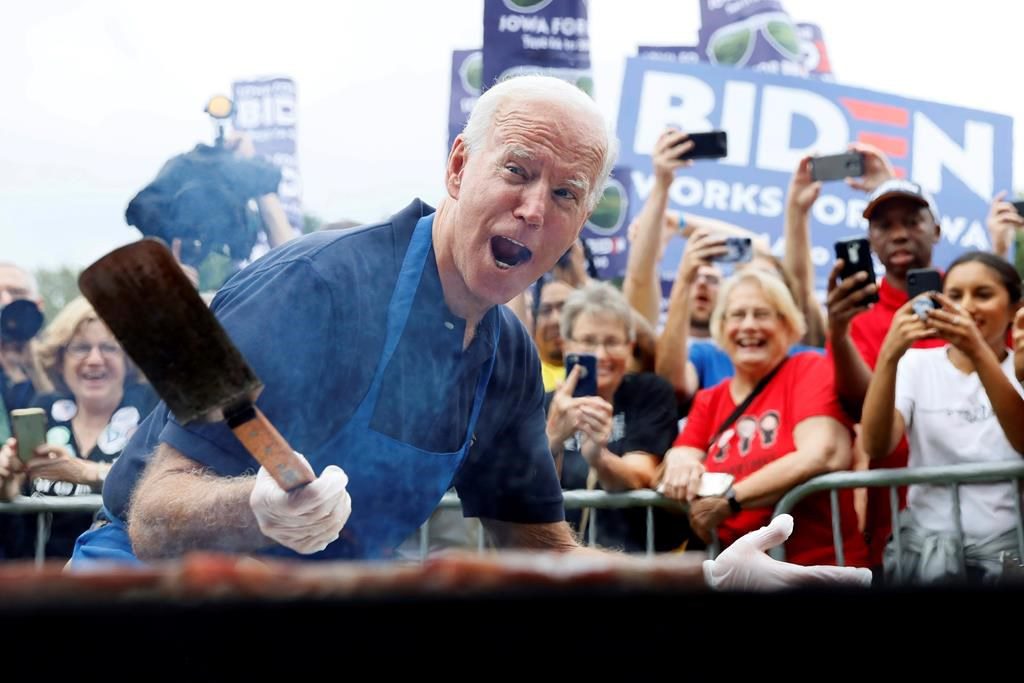 NEW YORK â€” President Joe Biden spent only a weekend as the "Hamburglar" in the conservative media world.

But while the false story lasted, it moved with a damaging speed and breadth, another example of a closed ecosystem of information affecting public opinion.

An academic study published a year before Biden became president was used to speculate that he would place limits on how much red meat Americans can consume as part of his stated goal to sharply reduce greenhouse gas pollution.

It was a potentially potent, visceral argument with punchy cable TV octane, namely that Biden was trying to limit people to eating one hamburger a month â€” an allegation that could seriously undermine his climate change plan before he even announced it.

There was one main problem: He’s said no such thing.

Yet two days after the Daily Mail brought up the topic in a report last Thursday, Rep. Lauren Boebert, a Colorado Republican, was tweeting, "Why doesn’t Joe stay out of my kitchen?"

The Mail’s story, by Emily Crane, was headlined "How Biden’s climate plan could limit you to eat just one burger a MONTH, cost $3.5K a year per person in taxes, force you to spend $55K on an electric car and 'crush' American jobs."

Crane cited a January 2020 study by the University of Michigan’s Center for Sustainable Systems, which discussed how a transition to a more plant-based diet by Americans could cut down on greenhouse gas emissions. The paper estimated the environmental impact of a 90% reduction in beef consumption.

Martin Heller, a research specialist at Michigan and one of the study’s authors, said there was no connection between the research and Biden’s plans.

"The conversation so quickly gets pushed to these extremes and I think that’s an effort at poking at people’s fears," Heller said. "That’s the frustrating part to me â€” that we can’t have a conversation about how to get creative in this sort of middle space."

The Britain-based Daily Mail defended its story while criticizing others in the media.

"President Biden has announced an extremely ambitious target for carbon emissions reduction that will have a massive effect on the American economy and way of life without giving a single detail of how he expects to achieve it," a newspaper spokesperson said.

"Unlike the rest of the overwhelmingly White House-whipped American media, the Mail attempted to explore this gaping hole at the centre of the president's announcement," the representative said.

In fact, Biden has discussed several initiatives to help reach his climate goals, including increasing the use of wind and solar power and slashing emissions from fossil fuels such as coal and oil.

The newspaper’s spokesperson said that "we made it very clear these were steps that MIGHT have to be taken."

But as the story spread, the qualifiers were deemphasized or disappeared entirely.

The conservative website Gateway Pundit ran a story Friday with the headline "Biden’s climate requirements: cut 90 per cent of red meat from diet; Americans can only eat one burger per month."

The body of the story itself was less incendiary, quoting the Daily Mail and using the qualifier "could."

While a graphic on Friday’s "Fox & Friends" talked about what will be required to meet Biden’s green targets, host Ainsley Earhardt said, "He wants to cut out 90% of the red meat that you all eat."

Later, Fox News anchor John Roberts said: "Say goodbye to your burgers if you want to sign up for the Biden climate agenda. That’s the finding of one study."

A graphic onscreen, with a picture of a cheeseburger, read: "Up in your grill. Biden’s climate requirements: cut 90 per cent of red meat from diet, max 4 lbs. per year, one burger per month."

It was Republican Georgia Rep. Marjorie Taylor Greene who dubbed Biden "The Hamburglar," a reference to a character in McDonald’s commercials.

There were some 23,000 examples of terms like Biden’s climate plan, requirements or mandates appearing together with "meat consumption" in the context of political conversations online between Thursday and Monday, according to the media intelligence firm Zignal Labs. "Red meat” also had some 59,000 mentions in political chatter.

"This is pure propaganda," said Jennifer Grygiel, a Syracuse University communications professor who specializes in disinformation.

There is little incentive for politicians and others to check their facts before posting on popular social media platforms, and those platforms aren't doing it for them, Grygiel said.

Once the false claim gets into people’s heads, it’s hard to dislodge. Many targets of the story are unlikely to see fact-checks, said John Cook, a research fellow at the Monash Climate Change Communication Research Hub.

Republicans have been frustrated in trying to find lines of attack that will stick against Biden in his first 100 days in office. Many in the conservative media world have also continued to spread lies about widespread fraud in the 2020 election.

Also this past weekend, the New York Post reported that migrant children entering the United States across the southern border were getting copies of a book from Vice-President Kamala Harris in a welcome kit. The Post has since corrected the story to say there has been only one known time that a migrant child got Harris’ book.

On Sunday, Biden spokesman Mike Gwin posted on Twitter a photo of a smiling Biden grilling steaks at a campaign stop, and linked to a CNN fact-checker who called claims about the president proposing limits on meat consumption "completely imaginary."

The Daily Mail on Monday updated its story on Biden’s climate control plans without saying what was done. The headline did not change, and a spokesperson said it was for "minor cosmetic reasons."

On Fox, meanwhile, Roberts told viewers that while the network correctly presented data from the Michigan study, "a graphic and the script incorrectly implied it was part of Biden’s plan for dealing with climate change. That is not the case."

A Fox spokeswoman on Tuesday would not discuss the network’s editorial decision-making, including whether a journalist checked with the Biden administration before reporting on the issue.