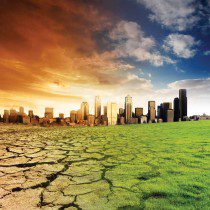 The good news is the election speculation can finally end. The bad news, well the bad news is all around us.

Western North America is on fire, or if not on actual fire, suffering from severe drought. Greece is on fire. Catastrophic floods are occurring everywhere from Europe to China. There was a “heat dome” that settled over B.C. And elsewhere, when it has been hot this summer, it has been very hot indeed.

Just this week, the Intergovernment Panel on Climate Change (IPCC), the UN body studying climate science, put out its latest report which confirmed what is increasingly obvious: climate change is already here.

So, in some ways, now is the perfect time for an election. The IPCC lays out a coherent, and pretty dire, case for where we’re at.

“It is unequivocal that human influence has warmed the atmosphere, ocean and land,” the report says according to a Bloomberg report.

Bloomberg sums up the report succinctly:

The past decade was most likely hotter than any period in the last 125,000 years, when sea levels were as much as 10 metres higher. Combustion and deforestation have also raised carbon dioxide in the atmosphere higher than it’s been in two million years, according to the report, and agriculture and fossil fuels have contributed to methane and nitrous oxide concentration higher than any point in at least 800,000 years.

This is pretty grim stuff, but it is not sounding our ultimate doom. Not yet, at least. There is still time to put the brakes on some of the worst case scenarios. The earth’s temperature has, so far, only risen about 1.1°C from the 19th Century average. In the next 20 years, that will rise to 1.5°C without taking serious action.

And so far, none of the signatories of the Paris Accord have done enough to prevent warming from crossing the 2°C mark, beyond which the effects on the climate get much worse.

“This report must sound a death knell for coal and fossil fuels before they destroy our planet,” UN Secretary-General Antonio Guterres said.

That’s certainly a dire statement, but it also means there is still time to make a difference.

So here we are at the start of a federal election — which reports suggest will kick off this Sunday — wherein we could perhaps maybe see some kind of solution proposed.

The current likeliest outcome is Justin Trudeau and the Liberals win again with a solid shot at a majority government. Which, if you listened just to their rhetoric particularly about climate change, you might think is a good thing. But it is probably worse that not good, but actively bad.

The trouble with the Liberal Party, this one especially, is how the way it talks about itself becomes all consuming, to the point they might actually believe their own bullshit.

Listen to your own voice enough talk about the serious and important work you’re doing to combat rising global temperatures — hey, there’s a carbon tax now! — and you start to really think that that’s enough. That good will and saying the right words is enough. This is a government, after all, where the prime minister and then-environment minister Catherine McKenna both marched in climate protests that were…protesting their own government.

(You can see a similar mindset at work when Trudeau took a knee at anti-police brutality protests, which again were protesting his own government, all the while he was surrounded by RCMP officers.)

Look no further than current environment minister, Jonathan Wilkinson, who was asked on CBC how that might change the government’s approach to doing things because of the seriousness of the IPCC’s findings. His answer leaves much to be desired.

“Canada needs to ensure that in the context of that transition, it’s extracting full value for its resources and using that money to push forward in terms of reducing emissions,” Wilkinson told CBC. “What we’re doing is saying it’s got to be part of the transition, but part of the transition is being able to raise the revenues that enable you to actually make the investments that are required to go there.”

So, you see, the federal government bought an pipeline, and is finishing its construction, to make sure that we’re able to suck as much oil — of higher-than-average carbon intensity! — out of the ground, so that we can make enough money to counter the cost climate change.

While it is a truly incredible answer, but it is quite honest. The government will never do what is necessary to actually reduce this country’s carbon emissions enough to meet the requirements of our own commitments. Never mind trying to exceed them.

There is far too much money to be made by oil companies for them to get in the way of that.

I would say something like, ‘This presents us with a stark choice in the coming weeks for election day.’ But I’d be full of shit.

There is little chance of a stark choice being offered, because we don’t have the sort of political culture that offers stark choices.

Instead we get variations on a theme. The best hope this election for a more serious climate policy might be the NDP under leader Jagmeet Singh. But pinning hopes on the modern NDP is a fool’s errand. Their party is not one that is looking for a radical departure from the status quo, but instead a party that is focused on wooing Liberal voters to pick up enough seats to wield slightly more influence in the House of Commons.

That sort of focus is not going to lead to the sort of boldness required.

The Conservatives are of no hope on the climate file, and the Greens simply have no hope of anything given the state they are in.

So, once more, we will fight an election on a bunch of piddling issues, with tiny solutions being sold as big promises.

All the while more carbon enters the atmosphere, and the globe grows ever hotter. At some point something will have to be done, but by the time this country is mobilized to truly do something serious, it will be too late.

We have our shot, but don’t worry, we won’t take it.