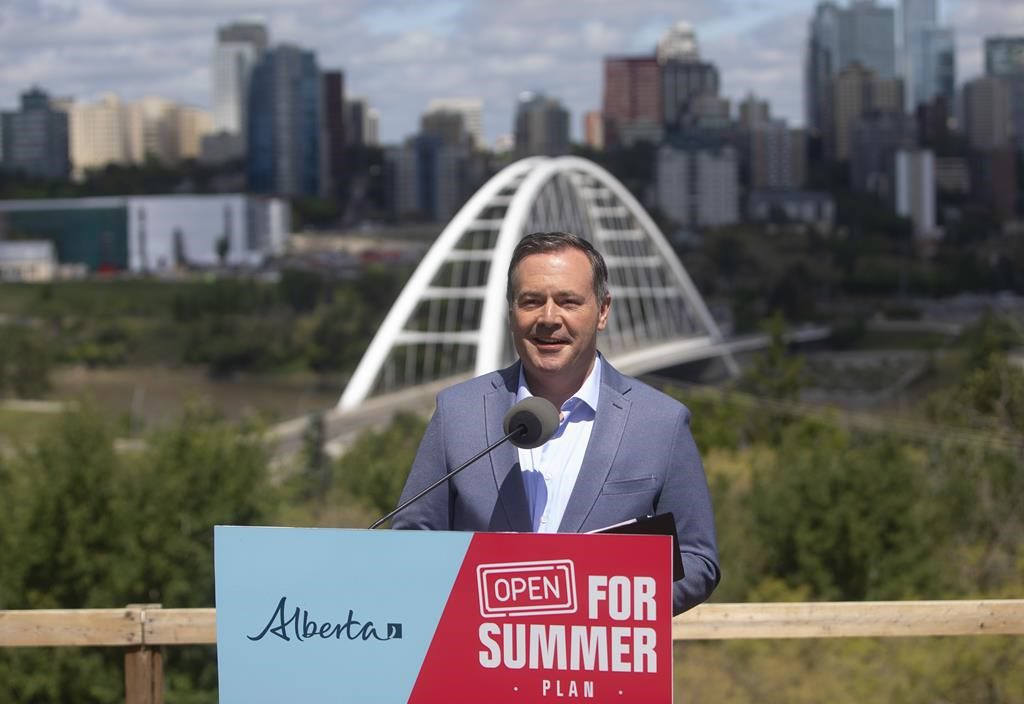 Alberta is enduring a do-it-yourself Covid fourth wave as the provincial government disappears into the woodwork.

The province has skyrocketing case counts and rising hospitalizations. But the regime established in the summer when it appeared the plague was fading remains in place.

In the absence of guidance from the UCP government, cities and school boards are instituting their own mask mandates and regulations. A group of doctors is staging live pandemic updates as the Medical Officer of Health retreats to a tweet-only communication strategy.

With contract tracing at a bare minimum, word of mouth and social media have been deployed to alert the public to cases.

A pub in Calgary, for instance, took to Facebook to let patrons know that a vaccinated staff member had tested positive for Covid.

Edmonton’s city council decided this week to bring back a mask mandate for all indoor public spaces including retail stores and extend it to the end of the year or until case rates drop below 100 per 100,000 population for 10 straight days. The case rate at the beginning of the week was 238.2 per 100,000 people.

Some school boards across the province are tinkering with Covid masking and regulations just as classes start again.

So Albertans are taking the initiative to protect themselves. It may be better than nothing but it falls far short of what a co-ordinated provincial policy could achieve to turn back the current Covid tide.

The UCP government has been weirdly out of touch in the past three weeks as concerns rise.

Premier Jason Kenney has been “on vacation” and has chosen not to provide a designated hitter from cabinet to deal with the Covid issue.

In fact Culture Minister Ron Orr, caught by reporters at a newser to celebrate culture days, was effectively silenced by his press secretary, who brought an abrupt halt to the questioning when it turned to the absence of government comment on Covid.

Finance Minister Travis Toews decided to deflect questions at a fiscal update with comments about how the government had expected cases to rise and is keeping Albertans informed appropriately, presumably with canned press releases and social media announcements.

It appears the provincial government is trying to ride out the fourth wave. But for an increasing number of Albertans it looks more like they are drowning.

Three weeks ago, when Chief Medical Officer of Health Deena Hinshaw had to walk back plans to abandon public health pandemic measures altogether, she made it clear the province is moving forward, not backward, on dealing with Covid.

Basically the UCP is relying on vaccines to save the day.

A statement from Steve Buick, press secretary to the health minister, spells out the party line.

“The province is seeing an increase in hospitalizations due to Covid-19, overwhelmingly among unvaccinated Albertans….Vaccines remain the only sure way out of the pandemic. They protect us, our families and the wider community.”

As every good libertarian knows, you can’t force people to get vaccinated. Alberta is the province with the greatest percentage of vaccine resistant population.

The drive to get needles into arms has prompted the government to announce booster third shots for seniors in extended care settings and the immunocompromised.

That’s a sensible precaution but it doesn’t address the current crisis and runaway spread of the disease.

The fact that even the fully vaccinated can get Covid and pass it on doesn’t factor into the government’s strategy. Children under 12 still can’t get the shot. And there’s that nagging statistic that shows 17 per cent of hospitalized Covid patients are fully vaccinated.

The UCP, already battered by low popularity polls, is loathe to take responsibility for mask mandates and any lockdown measures. Kenney would have to admit that his “best summer ever” strategy of opening wide on July 1st failed.

It’s time to get back to business and take the necessary measures to wrestle down the numbers with a province-wide, science-based approach.