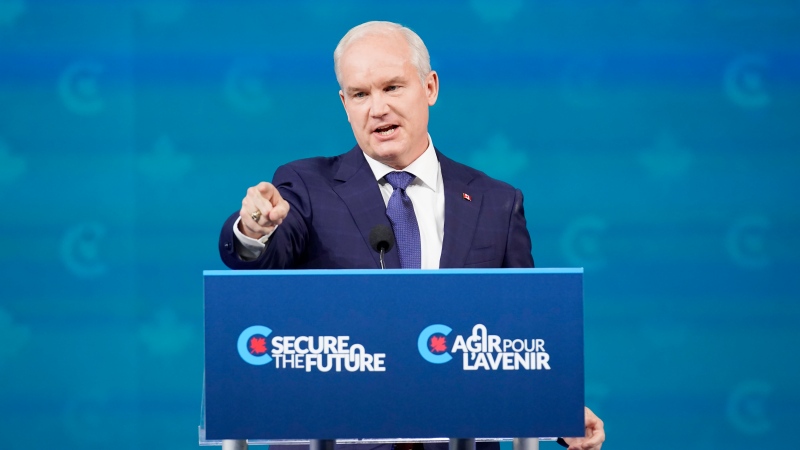 They say it’s OK to make mistakes as long as you learn from them.

This makes me wonder if Conservative Party leader Erin O’Toole has learned from his mistake.

What mistake, you ask?

Well, recently, while musing to the media as to why he came up short in the last federal election, Conservative Party leader Erin O’Toole, declared, “(Prime Minister) Trudeau used the pandemic to divide Canadians. We did not. Did we pay a price for it? Perhaps we did.”

In other words, O’Toole seems to think he lost because, unlike his rival, he didn’t play what the media sometimes likes to call the “politics of division.”

Not playing that game was his mistake.

After all, dividing voters is a time-honoured and effective way to win elections.

As a matter of fact, ever since democracy was invented, all political parties, of all ideological stripes, in countries all over the world, have successfully used this tactic.

Basically, it works like this: a political party will divide the electorate into two groups – Us and Them.

The political party will then go on to say something like, if we take control of government our priority will be to protect the good people of “Us” from bad people of “Them” who want to harm “Us.”

Yes, it’s a simplistic, maybe even crude, formula, but it works because it appeals to our ancient subconscious tribal impulses.

Simply put, millions of years of evolution have hardwired our brains to be fearful of people from outside our tribe and to galvanize around strong leaders who’ll protect “us” from “them.”

It’s a mindset that helped our primitive apish ancestors survive the dangers constantly lurking in the prehistoric world.

At any rate, my point is, smart politicians always take advantage of this evolutionary quirk.

Yes, even idealistic, “sunny ways” politicians like Trudeau will play the “us” vs “them” card.

Indeed, Trudeau, as O’Toole noted, craftily plugged the pandemic into this divide and conquer formula, as he promised to protect Canadians who had COVID vaccinations (us) from unvaccinated Canadians(them).

It was a message that certainly resonated with our subconscious minds and, unfortunately for the Conservatives, O’Toole did next to nothing to counter it.

Now don’t get me wrong here; I’m not suggesting O’Toole should have copied Trudeau’s pandemic-oriented “us vs them” strategy.

For one thing, such an approach would possibly have alienated grassroots conservatives, many of whom are suspicious of things like vaccine passports.

Rather I’m saying, he should have put forward an alternative “us vs them” scenario, one that would have worked better for him strategically.

Certainly, there’s lots of ways for conservative politicians to play the game.

For instance, former US president Donald Trump and former Toronto Mayor, the late Rob Ford, argued they would stand up for regular citizens (us) against corrupt and venal politicians (them).

Trump’s rallying cry was “Drain the swamp”; Ford’s, was “Stop the Gravy Train.”

Meanwhile, former Conservative Prime Minister Stephen Harper gained a lot of political mileage when he pledged to defend law-abiding citizens (us) from bleeding-heart liberals (them) who wanted to put criminals out on the streets.

So yeah, O’Toole had plenty of options.

Off the top of my head, he might have made some gains had he channeled his inner populist, and accused Trudeau of caring more about his Bay Street buddies than about small businesses on main street.

But he didn’t. (The NDP, by the way, also failed to launch this obvious attack on Trudeau.)

At any rate, the question is, has O’Toole learned his lesson about how to engage in hardball politics?

If he has, then I suspect by the time the next election rolls around O’Toole (assuming he’s still Conservative Party leader) will promote the Conservatives as “Us” and degrade the Liberals as “Them”.

If he hasn’t learned his lesson, well, O’Toole will probably lose again.