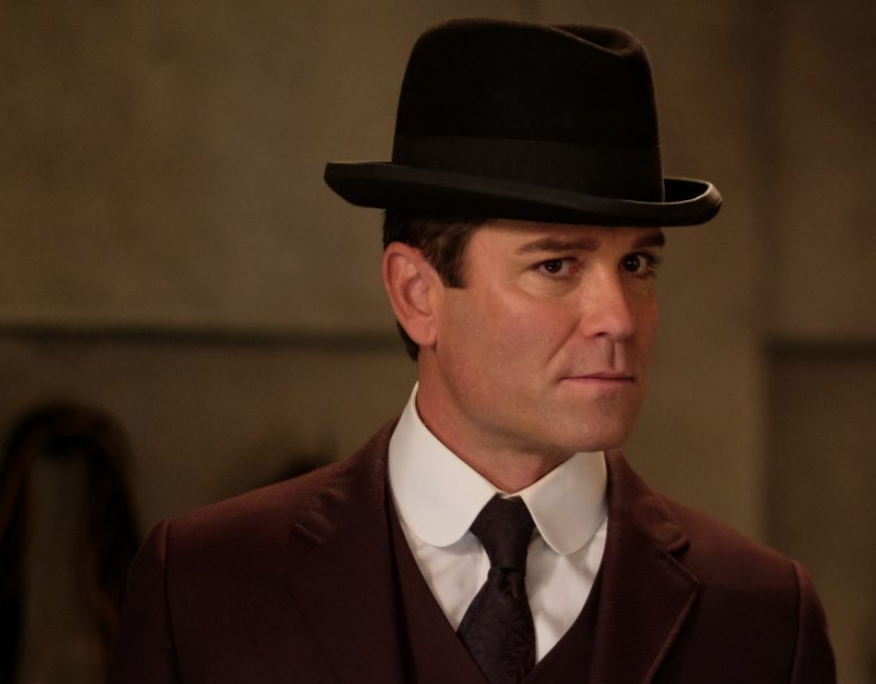 It’s always a pleasure spending Christmas with my wife and son. We gaze at our tree, eat good food, read books, listen to music and watch DVDs.

I’ve viewed a cornucopia of Christmas-themed movies, animation, sports and documentaries in the past. In recent years, I’ve added another subject into the mix.

Let me explain it this way. Sir Alfred Hitchcock’s 1954 thriller Dial M for Murder is a captivating tale about adultery, revenge, deception, mystery and a devious plan gone wrong. I’ve taken the imaginary rotary phone (of sorts) and instead Dial M for Mystery, be it Murdoch, Midsomer, Ms. Fisher and many more!

And, of course, there is Maureen Jennings’ wonderful Detective Murdoch series.

The British-Canadian mystery writer has published eight novels about Detective William Murdoch. Her fictional 19th century protagonist grew up in Nova Scotia with a strict Roman Catholic upbringing. Murdoch works for the Toronto Constabulary at Station House No. 4. He’s depicted as a polymath with a photographic memory, and his forensic skills have helped solve many a mystery and murder in Toronto and elsewhere.

The real-life inspiration for Jennings’s books was John Wilson Murray. He was named the first Detective for the Government of Ontario in 1875, and solved hundreds of crimes before he passed away in 1906. He was later joined by two other detectives, which led to Murray becoming chief inspector and helping build the Criminal Investigation Branch of the Ontario Provincial Police.

Murray’s Memoirs of a Great Detective (1904) was turned into a popular CBC television series, The Great Detective, which ran from 1979-1982. Jennings’s stories took the country’s admiration for the great crime detective even further. Bravo Canada developed three 2004 made-for-TV movies, Murder 19C: The Detective Murdoch Mysteries. This led Shaftesbury Films to create Murdoch Mysteries, a weekly, hour-long drama that ran on Citytv between 2008-2012 – and, since its fifth season, on CBC.

I’ve written about Murdoch Mysteries for several publications, including Loonie Politics. This has been aided by screeners sent to me by the publicity department at RLJ Entertainment Inc./Acorn Media over the years.

Season 14 only contains 11 episodes. This is due to COVID-19 restrictions, which shut down many TV and movie sets for lengthy periods of time. Nevertheless, each episode is fascinating and intriguing to watch.

The first episode, “Murdoch and the Tramp,” was directed by lead actor Yannick Bisson and featured the late Charlie Chaplin. “The .38 Murdoch Special” was directed by Sharon Lewis, who I appeared with twice when she hosted CBC Newsworld’s counterSpin. The two-part episode, “Everything is Broken,” ended the season on a high note.

There was also a limited edition Halloween pop-up collectible in 2021. It contained the two Halloween episodes, “Sir. Sir? Sir!!!” (2018) and “Murdoch and the Cursed Caves” (2019), plus a three-minute bonus feature, The Murdoch After Show. Interestingly, Murdoch Mysteries had another Halloween episode in 2021 – and, for the first time in several years, a new Christmas episode. These two traditions will hopefully remain part of the franchise going forward.

Another great RLJ/Acorn release is the long-running British crime drama Midsomer Murders. Based on the Chief Inspector Barnaby book series written by Caroline Graham, the TV show started in 1997. It’s currently in Series 22 with a total of 129 episodes, and is broadcast in more than 200 countries internationally.

The limited edition set Midsomer Murders: John Barnaby’s Top Ten is a superb collection of the show’s stand-out episodes, including “Death in the Slow Lane,” “A Sacred Trust” and “The Killings of Copenhagen.” Barnaby, played by Neil Dudgeon, is a highly intelligent, whimsical and affable detective who solves an endless parade of murders in the fictional county of Midsomer. It’s been a fascinating series over the decades, and hasn’t lost an ounce of steam.

Finally, there is Ms. Fisher’s Modern Murder Mysteries, based on the Phyrne Fisher book series written by Kerry Greenwood. It’s a spin-off of Miss Fisher’s Murder Mysteries, which took place in Melbourne in the 1920s. The new series moves the characters forty years into the future. The main protagonist is Peregrine Fisher, daughter of Phryne’s half-sister Annabelle, who inherits her aunt’s fortune when she goes missing in New Guinea. It’s run for two seasons on Acorn TV, and is just as enjoyable as the original show.

I still have a few more DVDs to “dial,” so to speak, before I’ve fully caught up. I plan to enjoy each and every moment. Happy New Year, everyone – and speak to you in 2022!