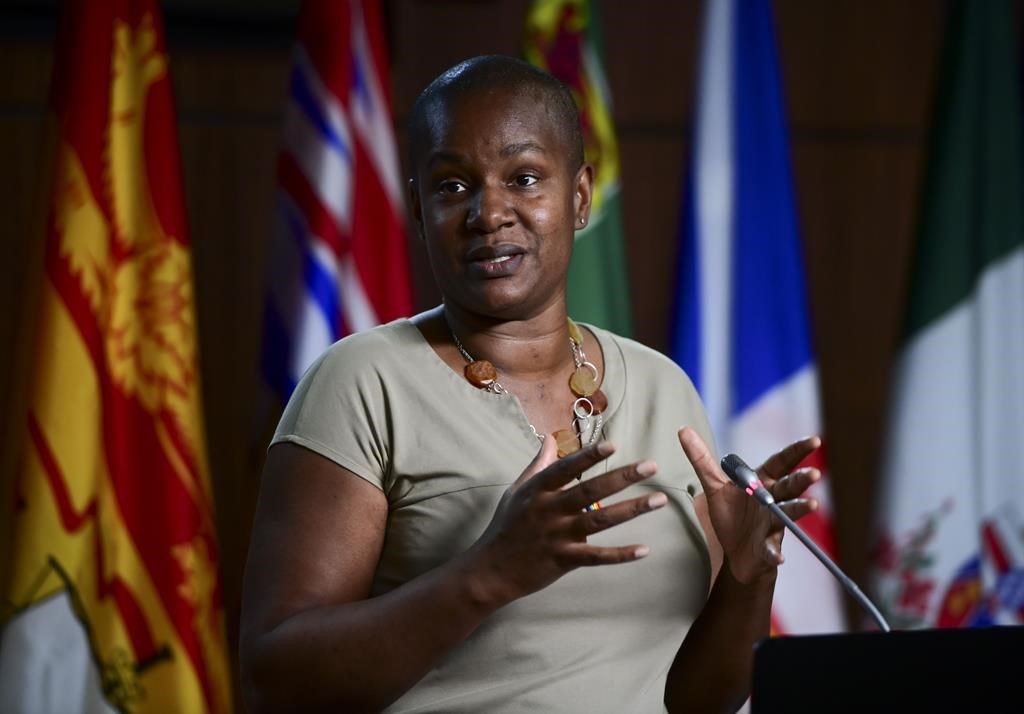 Does the Green Party receive more media attention than it truly warrants? Yes and no.

If you’re looking at the Green (or environmental) movement, it’s part of a larger entity that concerns many Canadians. There have been Green politicians in municipal politics. The Greens are the official opposition party in Prince Edward Island, and there are Green representatives in the B.C., New Brunswick and Ontario legislatures.

The bigger issue is the federal Greens. Founded in 1983, it’s a small, somewhat fringe outfit that’s achieved little electoral success in the House of Commons.

The first Green MP was Blair Wilson. He was elected in the B.C. riding of West Vancouver-Sunshine Coast-Sea to Sky Country in 2006 as a Liberal. Wilson left the party amidst allegations of financial issues, although most were eventually dismissed. He sat as a Liberal without caucus between October 2007-January 2008, shifted to an Independent and finally crossed the floor to the Greens on Aug. 30, 2008. Parliament had already been dissolved, so he never technically sat as a Green. He finished fourth out of four candidates in his bid for re-election in 2008, and hasn’t run again.

Elizabeth May, who led the party from 2006-2019, has been the Greens’ most successful and visible political representative. She became Canada’s first elected Green Party MP in the House of Commons after defeating then-Conservative cabinet minister Gary Lunn (46.33-35.66%) to win the B.C. riding of Saanich-Gulf Islands in 2011. She was re-elected in 2015, 2019 and 2021, participated in several leaders’ debates, and is generally perceived as the face of the party.

Only three other Green politicians have been elected to Parliament: New Brunswick’s Jenica Atwin in 2019 (who crossed the floor to the Liberals in 2021 and was re-elected), B.C.’s Paul Manly in 2019 (who lost his bid for re-election in 2021) and Ontario’s Mike Morrice in 2021. If you want to throw in former New Democrat Bruce Hyer, who crossed the floor and sat as a Green MP from 2013-2015 before losing his seat, and former New Democrat Pierre Nantel, who sat as an Independent in 2019, announced he would run as a Green and lost, be my guest.

Why does the media pay so much attention to the federal Greens? It’s largely because of the bizarre, circus-like atmosphere that’s existed between the party and its outgoing leader, Annamie Paul.

Paul was elected as Canada’s first Black and Jewish female party leader on Oct. 3, 2020 after beating Dimitri Lascaris on the eighth ballot. What should have been a euphoric moment for this left-leaning party has been a complete disaster.

The BDS (Boycott, Divestment and Sanctions) movement, as well as Israel and the Middle East, turned into huge political battlegrounds for Green politicians, supporters and the party leader. Manly spoke out against the potential removal of Palestinians from Sheikh Jarrah in East Jerusalem as “ethnic cleansing.” Atwin then turned up the heat when she described Paul’s call for de-escalation of the Israel-Palestine conflict as “totally inadequate,” and wrote that “Forced Evictions must end!” and “I stand with Palestine and condemn the unthinkable air strikes in Gaza. End Apartheid!”

Tensions grew between Atwin and Paul, leading to the former’s defection to the Liberals. The party cut funding for Paul’s campaign in the riding of Toronto Centre. Several party executives resigned in disgust, including May’s husband, John Kidder. Leadership reviews against Paul were announced, dates were set and things cooled off. The Greens, along with the Green Party Fund, filed a legal application in the Superior Court of Justice for Ontario against the arbitrator who brought down one of the non-confidence motions and leadership reviews. Paul countersued for compensation for costs incurred in these legal matters.

When Paul announced on Sept. 27 she would step down within two weeks, it appeared the circus was finally going to leave town.

That’s not been the case. The two legal matters have held up Paul’s departure date, which was supposed to have happened last week. On Tuesday, the Greens announced that half their staff, or 10 employees, would be temporarily laid off to cut costs and stop the party’s financial bleeding.

What a mess. It’s unlike anything ever witnessed in Canadian politics.

Many prominent Greens are frustrated by the infantile behaviour of its federal wing. Ontario Green Party leader Mike Schreiner, who sits as an MPP, is one of them. “We are deeply disappointed by Annamie Paul’s painful experience as leader of the Green Party of Canada,” he co-wrote in an Oct. 8 statement with deputy leaders Dianne Saxe and Abhijeet Manay, and they “earnestly hope that the federal party finds a way to rebuild and refocus on its key goals, especially the urgent commitment to planetary health that our two parties share.”

How will this end? The Greens will either give their heads a serious shake and clean up their political house, or Green politicians, party donors and supporters could abandon ship. It would be interesting if the mass exodus led to the creation of a new party called, say, the Environmental Party of Canada – and they nominated Paul as its first leader.

If that happened, the media would be hard-pressed to ignore the Greens once more.

Michael Taube, a columnist for Troy Media and Loonie Politics, was a speechwriter for former Canadian prime minister Stephen Harper.

After months of petty infighting, a torrid election campaign and the short-lived leader’s resignation, Canada’s Greens must confront an existential crisis. Will the federal party be able to rebuild and continue as an electoral force, or will its collapse prove too catastrophic to recover from?

Until quite recently, the Green political movement had been basking in momentum and promise. The federal caucus finally elected a second member in 2018, followed by a third in 2019, with the Maritimes quickly developing into another regional hotbed for the party. Provincial politics were especially propitious, with Greens elected as Official Opposition (party with the second-most seats) and bolstered by more than 30 percent of the vote in Prince Edward Island in 2019. A year earlier, the New Brunswick Greens trebled their seat count, while the Ontario Greens elected a member.

With Annamie Paul’s rise to the national leadership last October, a woman of colour had taken the helm of a major federal party for the first time in Canadian history – and it’s worth remembering that no major party other than the Greens has been led into a general election by a woman since 2000, back when Alexa McDonough led the NDP, which feels like a political lifetime ago.

With Paul in charge, the Greens initially seemed destined to continue expanding their electoral footprint – despite minor cracks in the party’s foundation that appeared soon after Paul replaced Elizabeth May as leader. Paul earned an impressive 32.7 percent in last year’s Toronto Centre by-election – by far the best federal Green performance ever in Toronto – despite beginning her campaign late, due to overlap with the party’s leadership contest. Greens often end up winning seats where they initially finish second and are able to convince the electorate to vote with their heart, rather than strategically – and this Liberal “fortress” in Toronto suddenly looked eminently winnable.

Paul also earned plaudits for her impressive performance in the televised English-language leaders’ debate earlier this month, with audience members certainly noticing that she was the only woman at the podiums.

But despite such tremendous potential, the 2021 election ultimately proved to be a trouncing for the Greens. Incumbent Paul Manly lost his seat, finishing third – the only time that an elected Green in senior government has failed to win re-election. The party’s popular vote declined by almost two-thirds from the previous election (plummeting from 6.6 percent to just 2.3 percent), and the Greens were unable to nominate a candidate in 86 ridings – in both cases, their worst performance since 2000, back when the party was still very much a fringe entity. Newfound popularity in the Maritimes mostly collapsed. And despite the silver lining of the party electing its first member in Ontario, leader Annamie Paul this week felt there was little choice but to depart from what has become a highly toxic political party – meaning that Canada’s first Black federal party leader lasted less than a single year.

How did it all go so wrong, so quickly?

Was it the nearly non-existent leadership transition? The highly-politicized federal council that refused to accept the new leader and attempted to undermine her at every step? The new leader not devoting enough time to building bridges between warring factions or assuaging change-averse mandarins? The ill-fitting political appointments that polarized the party and alienated its sitting MPs, leading to a cross-floor defection? The fomenting systemic racism among a mostly white and economically-comfortable membership? The venomous internal debates over peripheral policies, such as international relations? Members who bristled when Elizabeth May lapel pins were no longer compulsory? Half of the party’s staff being laid off ahead of a snap election, to complement the bare financial chest? Or the legacy of constant turnover among staff, volunteers and candidates, leaving anemic institutional memory?

For the Greens, the past year was an omnishambles lacerated through a blender of vitriol. And thankfully, it’s over.

But what happens next? Will the party be able to regain its past popularity, and possibly even push beyond its legacy of three seats? Or will it revert back to essentially the status of an environmental non-profit, exploiting the soapbox of elections to make noise during campaigns but failing to win seats and disappearing for the lengthy remainder of the electoral cycle?

Internally, the Greens are split along many political fissures, with the primary schism arguably eco-capitalism versus eco-socialism. For a party that officially subscribes to principles such as “participatory democracy” and “respect for diversity,” it’s perhaps ironic that its internal culture has come to somewhat resemble politics in Thailand – if I don’t get my way, instead of focusing on winning the next vote, I’ll just do my utmost to undermine the current regime and encourage a coup. Until someone with masterful leadership skills – be they diplomatic or otherwise Machiavellian – can bring harmony to the party, Greens may remain more focused on each other’s throats than their actual parliamentary adversaries.

But I would argue that the party’s post-Paul potential is perhaps just as dependent on external factors – principally how relevant other political parties insist on keeping the Greens. With Liberals buying an oil pipeline, the NDP equivocating on climate measures (given their prioritization of labour above environment), the Albertan NDP one of the most vocal proponents of oil production in Canada, and the BC NDP happily subsidizing the liquefied natural gas industry, it appears there will continue be a role for the Green party in Canada for the foreseeable future: dragging the stubborn legacy parties, kicking and screaming, toward an inevitable post-carbon future.

Put simply, Green success is built upon others’ failings.

It’s worth noting that while Conservatives drag their feet on climate action here in Canada, over in the United Kingdom, Tories often outdo Labour and Liberal Democrats when it comes to taking a bold stance. Perhaps it’s no wonder the Greens perform relatively poorly there.

It’s an incredibly simple premise – co-opt your opponents’ strengths – that so far has mostly eluded the Liberals and NDP here in Canada. And if that continues, the Greens will retain a lifeline, even if their internal affairs happen to mimic an Argentinean telenovela.