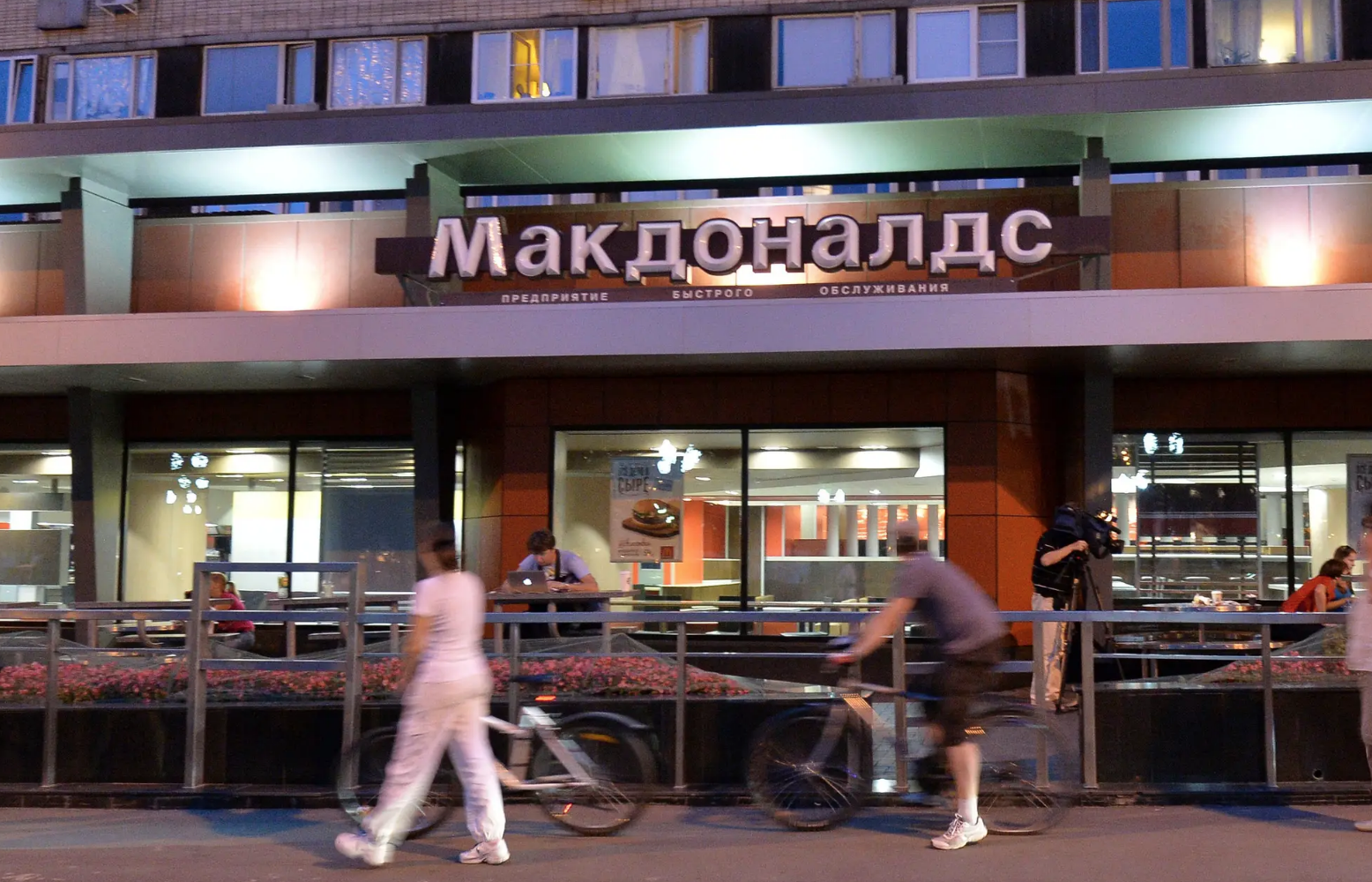 Several major U.S. corporations announced on Tuesday they would be temporarily closing locations and suspending operations in Russia. The list included Coca-Cola, Starbucks and McDonald’s.

One name on this list particularly stood out for its historical significance: McDonald’s.

The Soviet Union granted permission to McDonald’s in 1988 to open a franchise in Moscow. This was the culmination of 14 years of effort and dogged determination by the American-born Canadian businessman George Cohon.

His family had survived anti-semitic pogroms in Ukraine. They moved to Chicago’s Hyde Park area, where Cohon was born and raised. He worked as a corporate lawyer in his father’s Chicago firm, but moved to Toronto after becoming the licensee of McDonald’s Corporation for Eastern Canada.

That fell into his lap by chance, as it happens. According to his 1999 autobiography To Russia With Fries, the client he represented for the Canadian license passed on this deal. Cohon jumped in and made the arrangement with McDonald’s founder Ray Kroc. His first location opened in London, Ont. on Nov. 11, 1968.

Amusingly, Kroc offered to purchase the Canadian license from Cohon for $1 million that day. He opted against it, and gradually became chairman, president and CEO of McDonald’s Restaurants of Canada. The U.S. parent company ultimately bought him out with stock in 1971 – which has only increased in value – and he presided over 200 McDonald’s locations by 1976.

Cohon’s move into the USSR was a bit serendipitous, too.

A chance meeting with some Soviet delegates at the 1976 Olympics in Montreal led him to take them to a McDonald’s location. They were impressed, and he decided to find a way to bring the famous golden arches under the Iron Curtain. It took many years, and plenty of difficult negotiations, but then-Soviet Premier Mikhail Gorbachev agreed as a means of promoting the twin concepts of perestroika (reconstruction) and glasnost (openness, transparency).

Arlington Heights Daily Herald business writer Dan Culloton had a nice description of Cohon when his book tour reached a Borders Books & Music in Oak Brook, Ill. He said the Canadian CEO “seems affable and jocular enough to charm Karl Marx into thinking like a capitalist, and that’s not far from the truth of what he did.”

The first McDonald’s in the Soviet Union opened its doors on Jan. 31, 1990. It was a difficult task, by all accounts. The Cold War was still ongoing, meaning the parent company kept its involvement to a bare minimum. Rubles was the only form of currency that could be used for payment. A meal could cost half a day’s wages on average. Lineups could be hours long. Supply shortages in the Communist country forced McDonald’s to create its own supply chain. Not every Muscovite face was necessarily as open and friendly as Ronald McDonald’s, either.

Regardless, it was an astonishing moment in history. The first Soviet-based McDonald’s was universally seen as a triumphant moment for capitalism and democracy. It was a hopeful sign that the Soviets were beginning to see the light at the end of the tunnel, and would reject Marxism-Leninism before long.

There was also plenty of euphoria on the streets. Ksenia Oskina, one of the first 30,000 customers, told the Washington Post on Jan. 31, 2020 that she saved her Big Mac carton and drinking cup to show her co-workers. “I used that Big Mac box for a long time,” she said, “and put my sandwich in there instead of a lunchbox. I’d clean it, dry it on the heater and then use it again.”

As for Cohon, who served as senior chairman of what became McDonald’s Russia, he was named “Capitalisr Hero of Labor” by Pravda in 1990. Quite an accomplishment, all things considered.

How things have changed in Vladimir Putin’s Russia.

Democracy, liberty and freedom remain foreign concepts. The U.S. think tank Freedom House, for instance, has given Russia an abysmal ranking of 20 out of 100 the past two years. This is due to awful numbers for Political Rights (5/40) and Civil Liberties (15/60). It also ranks low on Global Freedom (19/100) and Internet Freedom (30/100). Hence, Russia is regarded as being “not free.”

In case you’re wondering about Canada’s score the past two years as a point of comparison, Freedom House puts us at 98 out of 100.

What about capitalism? It exists in Russia, but more on the basis of what we would call “state capitalism” or “crony capitalism.” There is private enterprise in fields such as agriculture, mining and retail trade, but the state (along with several oligarchs) controls most major corporations and the levers of power. A free market economy, it isn’t.

With Russia’s invasion of Ukraine, the world’s governments and businesses have wisely decided to push back in different ways.

McDonald’s employs “62,000 people who have poured their heart and soul into our…brand to serve their communities,” CEO Chris Kempczinski wrote to his employees and franchisees on March 8. “At the same time, our values mean we cannot ignore the needless human suffering unfolding in Ukraine. Years ago, when confronted with his own difficult decision, Fred Turner explained his approach quite simply: ‘Do the right thing.’ That philosophy is enshrined as one of our five guiding values, and there are countless examples over the years of McDonald’s Corporation living up to Fred’s simple ideal. Today, is also one of those days.”

That’s one good way to take a McBite out of Putin’s Russia.