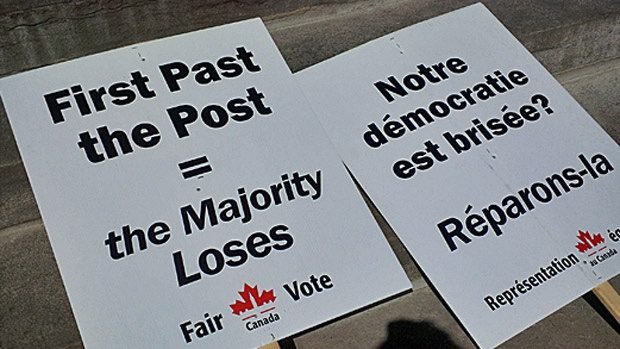 When you think of examples of Canadiana, what images does your mind conjure? Poutine, maple syrup or perhaps Nanaimo bars? Xenophobic blowhards ranting during televised hockey intermissions? West coast daffodils flowering in February, and the resulting long-distance phone calls as Vancouverites boast to Boomer relatives out east, still buried under several feet of months-old snow? Or perhaps a Brazilian coffee chain notorious for paying poverty wages to temporary foreign workers, all sinisterly garnished with a patriotic maple leaf?

But nothing truly screams “Canada” quite like politicians reneging on their promises to – finally, at long last, once and for all, we mean it this time, no kidding, it’s true, believe us – fix our dilapidated voting systems.

Don’t be. Canadian politicos have been selling us reassuring fibs about delivering fairer election systems longer than most of us have been alive. In fact, this year marks the celebration of a full century of politicians backtracking on their word. William Lyon Mackenzie King swept into power back in 1921 with the promise of improving Canada’s voting system, only to default on his commitment.

And it wouldn’t be the last election King pulled this deceitful stunt, as gullible as we Canadian voters are!

You see, dear reader, there is nothing more Canadian than a comfortable lie, whispered into the public’s ear by a sultry orator who insincerely promises to make everything better, only to inevitably carry on with the defective status quo. It’s what unites us as a country. Nothing bridges our differences more effectively than deception.

Occasionally we look to the south, toward our omnishambles of a neighbour, for a quick boost of self-esteem. For example, how could any self-respecting democracy tolerate such electoral chicanery as gerrymandering, in which electoral districts are redrawn simply to serve the re-election prospects of the governing party? For a country that likes to waggle its finger at despots across the world, the USA certainly enjoys flaunting behaviour that wouldn’t feel out of place in any banana republic.

But don’t fret with envy, my dear beaver-lovers! The soothing falsehoods that Canada’s “leaders” generously sprinkle regarding electoral reform are truly no less appalling. After all, we wouldn’t just let those grit-munching yokels waltz to the title of most insidious democracy north of Haiti!

Whether it’s the USA’s gerrymandering or Canada’s serial lies about improving how we vote, both are examples of preventing elections from accurately reflecting how society votes, warped for the benefit of incumbent politicians, to the detriment of representative democracy. It’s just less obvious in Canada, because as the two largest political parties perpetually swap places (between government and official opposition), they don’t need to engage in any blatant redistricting.

When it comes to politicians changing their tune once comfortably ensconced in power, Canada is certainly no stranger to such shenanigans. 14 years after King’s initial ruse, he pulled the wool over our eyes once again, promising during the 1935 election campaign to fix that nasty, dreadful election system. Once again, Canadians voted him into power. And once again, he howled with laughter at how naïve we all are.

Pierre Trudeau, father of Canada’s current Prime Minister, muttered and mumbled about the benefits of proportional representation, yet was frozen with inaction despite holding the reins of power.

More recently, Dalton McGuinty’s Ontario Liberals promised a public debate on electoral reform. After a panel of Ontarians recommended an alternative voting system and the provincial government announced a referendum, the Ontario Liberals declared themselves “neutral” and watched passively as the opposition Conservative leader sabotaged the entire process.

Jean Charest as Quebec Liberal premier made a promise to reform their election system, launched a commission, and… ignored its recommendations.

Over in New Brunswick, it took their provincial Liberals a full decade to even acknowledge a public commission’s recommendation to switch to a better voting system. When the government realized it didn’t like the suggested system, it launched another commission that conveniently recommended a less reformist system – and even that wasn’t acted upon.

Prince Edward Island witnessed perhaps the most galling example of politicians breaking their word. When the public voted during a referendum to switch to mixed-member proportional representation, Liberal premier Wade MacLauchlan offered a serious of meek excuses as to why the result should be ignored. Instead, another referendum was concocted, this time with severe financial limits arguably intended to muzzle debate and prevent public awareness.

In the Yukon, the Liberals formed a commission, then an all-party committee, but engineered a series of delays that ensured nothing would change prior to the 2021 election.

But not to be left out, Quebec’s current conservative politicians reasserted their right to mislead the public by reneging on reform promises. After initially pledging to change Quebec’s voting system to a form of proportional representation by the 2022 election without a referendum, François Legault abruptly changed tune and instead announced that a referendum would be held alongside the 2022 election – about whether to adopt a system his cronies engineered to be as unattractive as possible, with a ludicrous 10% threshold for parties to win proportional seats, which would have been one of the highest such thresholds in the world, greatly minimizing its proportionality. And if that wasn’t enough, just one fortnight ago, the Quebec government even backed out of holding a referendum next year, delaying the process even further. Quite a series of events for a political party that came to power under the slogan “C’est assez, faut que ça change!” (Enough, things have to change!).

We get it, Canadian politicians: you enjoy being in power, and you’re happy to feed us bald-faced lies in your quest to retain such trappings.

Lie to us once, shame on you. Lie to us a dozen times, well…

As with our American cousins and their gerrymandering problem, there’s no easy fix to Canadian politicians lying to the public on electoral reform. In theory, the solution should be the same in both countries: take elections out of the hands of politicians, and let neutral, objective election officials create fair systems.

After all, it’s a blatant conflict of interest for politicians to design the systems that determine how they come to and retain power. When a vote at a city council presents such a conflict, municipal councillors recuse themselves from voting. Yet in senior government, politicians are more than happy to stick their arm up to the elbow in the proverbial honey jar.

So how can frustrated citizens wrest back power from devious politicians? One way would be to launch citizens’ assemblies, in which a random assortment of residents research and recommend (try saying that five times quickly!) new electoral systems to use, ideally implemented without subsequent interference by politicians. Another idea might be to let experts, such as political science professors, help determine which voting systems would be best for us to use.

But anyway, enough about trying to make the world a better place – surely that’s not what politics is supposed to be about! Let’s have some fun instead, by gearing up for the centenary celebrations of Canada’s electoral reform duplicity. Be sure to head down to your local dollar store to stock up on disposable products adorned with Canadian flags. And remember: nothing says patriotism like passively shrugging and re-electing politicians who’ve blatantly lied to our faces. It’s the Canadian way!