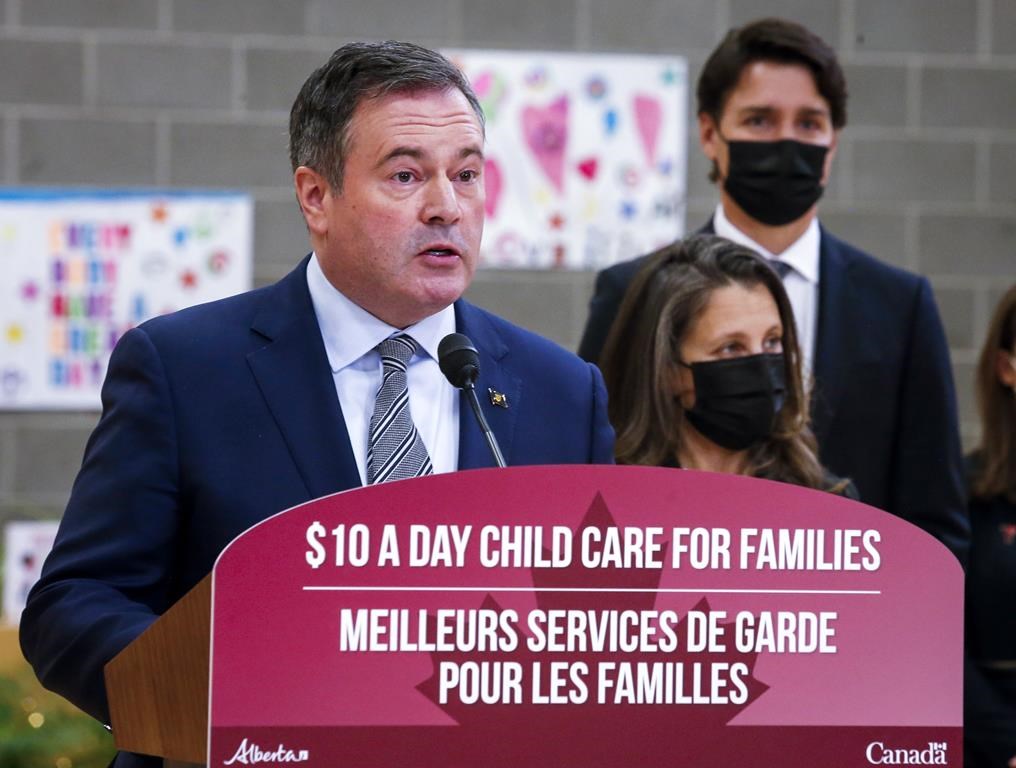 It could have been a lovely moment.

Prime Minister Justin Trudeau ventured into hostile territory this week with a bag of money and handed it to Alberta Premier Jason Kenney, a politician in desperate need of good news.

Here ya go Jason — spread this around to the many families in Alberta who are paying more than $1,000 per month for day care. Take the win — affordable quality day care is great for kids and parents, allows more parents to enter the workforce and frees up disposable income to benefit the entire economy.

Kenney could have taken credit for negotiating a great deal, defending the time it took to ink the agreement as necessary to get the terms just right for Alberta’s special mix of non-profit and profit day care services.

But the premier didn’t leave it at that.

The deep divisions and political baggage between Trudeau and Kenney broke out in a thinly veiled arm wrestling match. Even for a day, Kenney wouldn’t set aside his campaign for “a fair deal” for Alberta to concentrate on a great day care plan for Alberta’s families.

He argued the $3.8 billion was just tax money from Albertans coming back to where it belongs.

The final deal isn’t what he wanted, said the premier. He pressed for a no-strings attached handing over of funds, allowing Alberta to administer it as the government pleased. That would match the deal Quebec received, said Kenney.

“At the end of the day, it’s not the only time where we see what appears to be a two-tier federation,” said the premier.

Trudeau replied that unlike Quebec, Alberta doesn’t have a program that already provides day care at even less than the $10 per day price tag that Ottawa is targeting. If it did, it would get the same deal as Quebec, he argued.

“So let’s not create constitutional conventions out of this. It’s about looking at what families have, what families need, and how we get to $10-a-day child care right across the country, and that’s exactly what we did.”

Kenney accepting the federal largesse without pushback would have handed credit to Trudeau. And in Alberta, where there is still a general dislike of federal Liberals, there would be little political advantage in that.

And to be fair, Trudeau was no shrinking violet in the bizarre press conference exchange. Asked by reporters about the cap on oil and gas emissions he announced at the COP 26 conference, the prime minister managed to tick off the premier by mentioning any number of experts and advisors who are being consulted without any nod to the provinces who actually own oil and gas resources.

Kenney fairly lifted out of his shoes to catch that bait.

All of this is political theatre. And Kenney is not playing to national media or even moms and pops in downtown Calgary and Edmonton.

He is playing to the UCP base. His “fair deal” strategy has become paramount: Talk tough to Ottawa; play the underdog card whenever possible; acknowledge western separatist sentiment without espousing actual separatism.

There’s a whole other subtext to the government’s reluctance to sign on to the child care deal in the first place. The idea of universally funded not-for-profit day care is not central to the UCP worldview.

No wonder Chrystia Freeland stressed the idea that the economic spinoffs from the program outweigh the cost to the public purse in her remarks at the news conference. Convincing conservatives that social programs spin wealth into the economy is a key selling point for increasing tax spending in this area.

Outside of the direct sparring over Alberta’s rights and place in confederation, Trudeau also tapped the premier on the chin with an oblique remark in answer to a reporter’s question about a challenge to federal Conservative leader Erin O’Toole’s leadership.

The prime minister declined to answer directly, saying “the federal Liberals have never been so united.”

The premier, standing next to Trudeau at the podium, dealing with fractious constituency associations and caucus members, could not say the same of his own party.