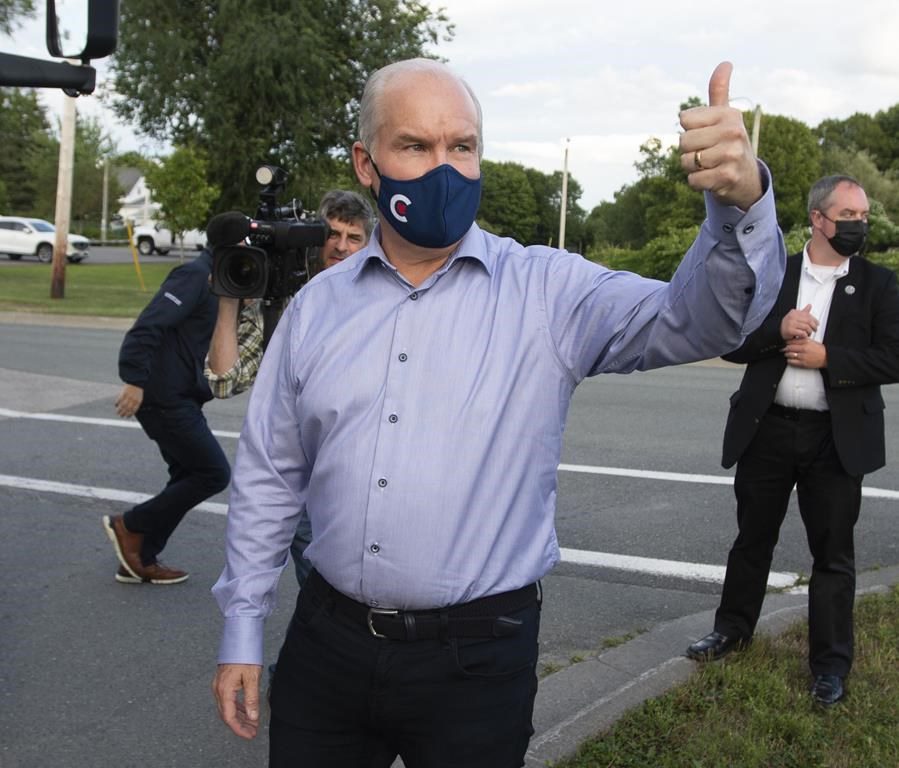 As the mobs of anti-maskers, anti-vaxxers, conspiracy theorists and general misanthropes continue to dog prime minister Justin Trudeau on the campaign trail, we saw a connection between what they’ve been saying, and what long-time Conservative MP Cheryl Gallant has been putting on her YouTube channel under the unironic moniker of “Gallant News Network.” And wouldn’t you know it, Erin O’Toole has once again turned a blind eye to Gallant and the unhinged things she has been putting out to the world. Granted, she’s not the only Conservative who has been spreading increasingly ludicrous conspiracy theories and general nuttery, and it’s all been happening while O’Toole has pretended that there is nothing to see here, please disperse.

When asked about this latest Gallant video – since scrubbed from her channel – where she warns people that Trudeau is planning a “climate lockdown” as she considered him a con man and that climate change was his “biggest grift,” O’Toole refused to answer as to whether he found it acceptable, even when asked several times. He later put out a press release that said that his plan takes climate change seriously (it doesn’t) and that all Conservatives are running on said plan – which doesn’t condemn the conspiracy theories, Gallant’s comments, or even more generally the increasingly violent mobs that have been following Trudeau around the country. And this isn’t the first time either.

Gallant was previously in the news in February when video emerged from her addressing campus Conservatives at Queen’s University, saying that Liberals want “all illicit drugs to be legal. They want anything goes in every aspect of life. They want to normalize sexual activity with children,” and that “cultural Marxists” have “taken over every university administration” and are silencing free speech on campuses as part of a broader agenda. “The elites call it the great reset or build back better or green new deal. The names change but the goal remains the same: more power for the powerful and less freedom for everyone else.” O’Toole turned a blind eye there as well. His response to questions about it? “Canadians have other priorities and so do I.”

Mind you, Gallant wasn’t the only one peddling the conspiracy theories about the “Great Reset” as being some kind of New World Order plot, as Pierre Poilievre was also doing so on the floor of the House of Commons, and when pressed on it, O’Toole at the time said that he’s the leader and that people should look to him for the party’s message. (For the record the Great Reset is a World Economic Forum initiative about using the economic recovery from the pandemic to address inadequacies in areas like health, energy and education, and is endorsed by figures such as Prince Charles). Other Conservative MPs, including O’Toole himself, have also tried to build conspiracy theories about things like the CanSino vaccine development program, and in trying to connect the unlikely possibility that COVID-19 was a “lab leak” from the Wuhan Institute of Virology with the firing of the two scientists from the National Microbiology Lab in Winnipeg. He was also pretty silent when MPs John Brassard and Kerry-Lynne Findlay were worrying that Chrystia Freeland was supposedly under the thumb of George Soros.

It also should be noted that Gallant has a long history of offensive and outrageous commentary. Back in 2004, she helped to sink the Conservatives’ election chances by telling the media that “the danger in having sexual orientation just listed [in hate propaganda laws], that encompasses, for example, paedophiles. I believe that the caucus as a whole would like to see it repealed.” Because that had a material effect on the Conservatives’ electoral outcome, by the next election, Stephen Harper enforced message discipline among his candidates, and Gallant was carefully handled so that she was never seen by media during a campaign, nor would she be a participant in any debates. O’Toole knows this.

We also need to remember what happened with Derek Sloan, and how during the leadership contest, O’Toole helped to shield him from caucus censure – including the threat of expulsion – after Sloan’s racist tirade about Dr. Theresa Tam having divided loyalties. Of course, this was O’Toole being crassly opportunistic, because he knew he needed second-ballot support from the social conservatives that were flocking to Sloan’s banner, and he needed to show that his “true blue” Conservatism included people like Sloan. Of course, as soon as he secured the leadership, he found the first excuse to have Sloan dumped from the caucus – and it has not gone unnoticed that Gallant has frequently said far worse than Sloan, but she remains securely in caucus, and as we’ve seen in the current instance, secure in her nomination to run for the party yet again.

This particular selective blindness is certainly part of O’Toole’s pattern, which includes the fact that he has largely spent his time as party leader mired in deception, dishonesty, and outright lies as a strategy. He has spent months openly lying with statistics, and encouraging his MPs like Poilievre, to do the same. In refusing to condemn Gallant or Poilievre, he tacitly endorses their lies and conspiracy theories, which makes it hard to take anything O’Toole says seriously. It also makes it all the more galling that many members of the media have spent the campaign to date trying to put forward this notion that O’Toole is some kind of cheerful policy nerd, but that particular image is as much a lie as anything else he’s been saying, whether it’s that he’s “true blue,” or that he’s suddenly a friend of private sector labour unions, never mind his own voting record of trying to quash them with onerous and punitive legislation. How can you take the policy planks – as incoherent as they are – of his platform with any seriousness if he’s done nothing but lie since he became leader, and how can you believe his supposed progressive credentials if he does nothing but turn a blind eye to the hard-right parts of his caucus, or the increasingly rabid base? He has a record that should be considered in the election, and thus far it’s not.