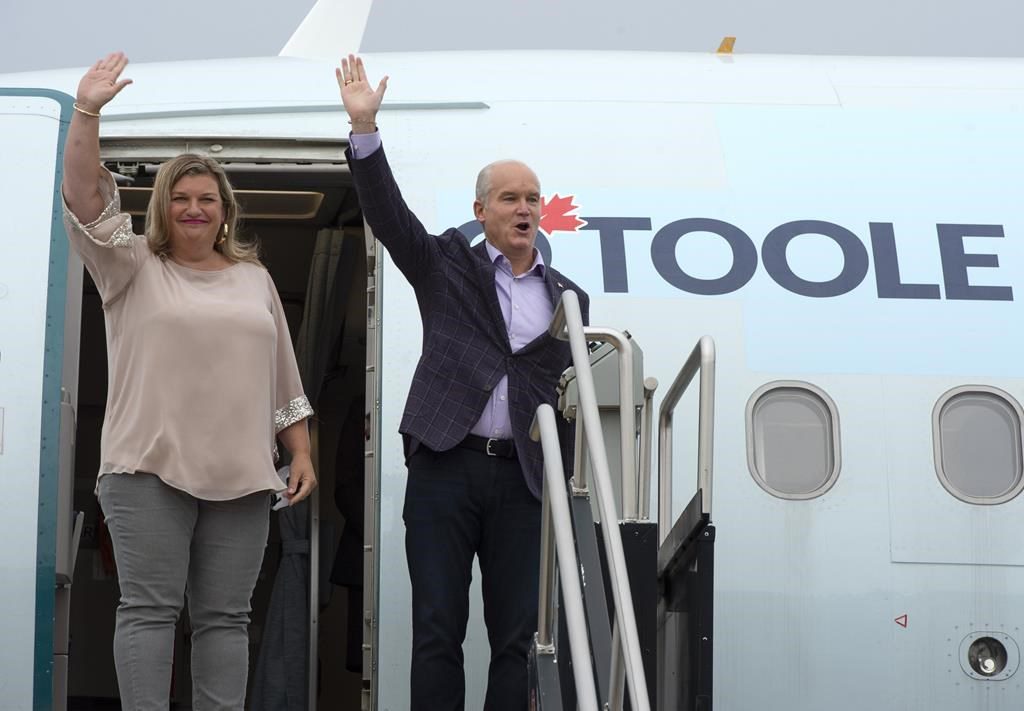 Conservative leader Erin O’Toole released his full election platform – minus costing – on Monday, trying to present himself as a credible alternative to the governing Liberals, and insisting that he has a real plan for the economy. I mean, it says so right in his platform. “It’s a plan. A very detailed plan,” it reads at the very top. Should we take his word for it?

To start off with, the document is presented in magazine format, with O’Toole in a t-shirt attempting a Men’s Health pose (minus the homoeroticism), while the lettering mimics a Maclean’s cover, right down to the maple leaf in place of an apostrophe. In contrast with the NDP’s platform, O’Toole’s is 165 pages of mostly text. Lots, and lots of text, because it’s a “very detailed plan.” As with most things from the Conservatives over the past few years, it opens with mischaracterizing much of the current economic situation in the country, and spends the rest of the document flitting between revisionist history of the party’s own record from when they were in government, and a lot of wishful thinking and Green Lantern Theory – a bit like the NDP platform in that regard. Like the NDP platform, this one also gets more repetitive the longer it goes, but hey, they needed to pad it to look as comprehensive as possible.

There’s also a lot of logical inconsistency with many of their proposals – things like pledging to overhaul the tax system to simplify it, while proposing all kinds of new tax credits. Yes, in true Conservative fashion, there is no problem that new tax credits can’t fix. Things like more tax credits for job creation, or replacing subsidies for innovation with tax credits instead. Other contradictions include increasing “Free Trade with Free Nations,” while at the same time ring-fencing all kinds of places for protectionism (that’s not how free trade works, guys); claiming to care about the environment while promising to repeal environmental protections in order to incentivize more resource extraction; and advancing reconciliation with First Nations by pushing them to resource extraction industries, while at the same time making it illegal for them to protest by blockading railroads.

The biggest internal contradiction is the pledge around childcare. “The COVID crisis has exposed how precarious the position of women is in the Canadian economy,” the document reads. “Long-term prosperity depends on women having the support they need to be full participants in Canada’s economy.” Sounds great. So what’s the plan? Cancelling the $10/day child care agreements with the provinces (which were signed as five-year agreements) in favour of refundable tax credits for child care. That won’t get women into the economy, because child care is a supply-side problem. Tax credits are a demand-side solution, and the last time the Conservatives were in power, their tax credits for new child care spaces created approximately zero of them. This is guaranteed not to get more women into the workforce.

Their other pledges with respect to women are also pretty tone deaf. For example, it talks about tax credits for hiring apprentices in the skilled trades who are women, but makes zero mention about doing anything about the sexism in those environments which keeps many – if not most – women out of those professions. The platform also acknowledges that the burden of caregiving for aging parents disproportionately falls on women and keeps them out of the workforce, but then offers them $200/month to help these seniors stay at home longer. No, seriously. That’s their plan.

The incoherence only gets more acute from there. While acknowledging that housing prices are a supply-side issue, they pledge to build a million new homes over three years, but ignore that the current funds aren’t getting spent because of bottlenecks in the municipal processes – not to mention that there’s not exactly a lot of slack in the construction labour market (which will drive prices higher). They want to have a Minister of Red Tape Reduction, but their precious tax credits are the very red tape that they decry because of how much the complicate the Tax Code. Their promise to give everyone making $20,000/year a $1/hour raise would incentivize employers to reduce pay by an equivalent amount.

As with the NDP, there are impossible promises, like somehow forcing Health Canada to accelerate their approval processes, which should alarm everyone. They would lower cellphone and internet bills by magic, apparently, doubly so with food costs. They claim that they will create “more competition” in a country of oligopolies, but because they are promising protectionism in the market, you can’t introduce foreign competition. Their section on tax fairness could have been lifted from the NDP, particularly in the rhetoric about going after “wealthy tax cheats” and making multinationals pay, as though governments haven’t been trying. They will also somehow convince the Americans to close the “loophole” in the Safe Third Country Agreement, and good luck to them for believing that. And then there’s the Green Lantern Theory of federalism, where they can apparently break down those interprovincial trade barriers that have plagued every government since 1867, and force provinces to recognize foreign credentials in a universal fashion.

One of the most galling instances of revisionist history is what it says about health transfers to the provinces, patting themselves on the back for the six percent escalator under the Harper years (that Paul Martin negotiated), and then blaming the Liberals for the escalator being reduced in 2017 when it was Jim Flaherty and Stephen Harper who set that rate (with good reason, as provincial healthcare costs were rising below three percent and they were spending that money on other things) – and then claiming that this “put lives at risk.” The absolute gall of trying that particular lie. And again, they claim to want to “partner” with provinces to put those increased transfers to mental health, while also pledging more provincial autonomy over transfer payments.

There is so much more, some of which they’ve already covered, like adding more rules and penalties to conflict of interest rules, no matter how useless a gesture that will be. “Tough on crime” measures that create more offences with more mandatory minimums that have been proven not to have a measurable impact on crime. Their same useless plan for carbon pricing that doesn’t actually make sense. Unconstitutional plans to appoint senators that have been “elected” by provincial processes.

It may be long and dense, but the platform is a hot mess. It’s a high-spending bro-covery plan whose claims for getting to three percent GDP growth are betrayed by the very fact that it won’t get more women into the workforce, and which looks at issues in a 1970s lens that pays mere lip service to inclusion without being substantive about it. More than anything, it confirms that the party has abandoned fiscal conservatism, and is flailing about to find things that sound popular without having much principle behind them – which seems to fit O’Toole quite well, given that he’s become a chameleon, constantly changing his colours to suit his environment. It’s hard to take seriously for someone who wants to led the country.