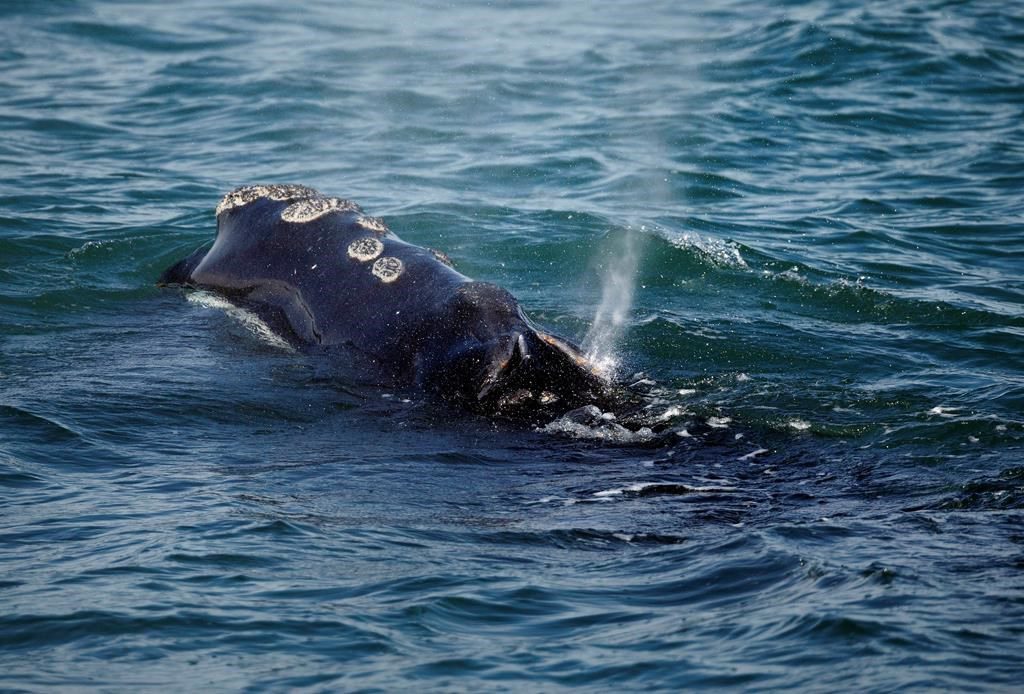 HALIFAX — Scientists are reporting a troubling reduction in the length of North Atlantic right whales, suggesting a key factor in their stunted growth may be the fishing gear many haul around after becoming entangled.

“It’s just the sheer energy loss from dragging around the extra gear, especially if (the entanglement) happened earlier in the whale’s life,” said Joshua Stewart, lead author of the study published Thursday in the journal Current Biology.

“If you’re dragging a sand bag around, you’re going to have less energy to devote to other things like growing.”

The U.S. study found whales born in recent years are on average about one metre shorter than whales born in the early 1980s. The collaborative work included data from aerial observations and other photographs gathered by National Oceanic and Atmospheric Administration, the Woods Hole Oceanographic Institution and the New England Aquarium, with measurements of 129 individual whales.

The ages of measured whales ranged from one year to 37 years old, including whales born from 1981 to 2019. Eleven whales in the study were observed with fishing gear on their bodies.

The scientists were able to identify the age of the whales observed from previous studies, and also used the photographs to calculate their length. They then compared this against the length that models predicted they should have reached by that point in their lives.

Stewart, a researcher with the National Oceanic and Atmospheric Administration in La Jolla, Calif., said in an interview this week the average decline in length was about seven per cent from 1981 to 2019, and in some cases young whales are about two metres shorter than expected.

Since June 2017, an unusually large number of the whales have died, reducing the population to less than 400 animals — a number that has some experts warning that the species is on the brink of extinction. Ship strikes and fishing gear entanglements account for most of the deaths.

The whales in the study were observed and photographed from conventional aircraft in the early 2000s and more recently with drone technology flying overhead.

Stewart says the data suggested whales in the study that had gear entanglements had slower growth in length. He also says that when female whales were entangled while nursing, the data showed their calves would also lose growth due to receiving less nutrition.

The science team also found that generally over the decades, the average size of the whales — who usually reach their full adult length of up to 16 metres by the age of 10 years — was falling.

Stewart said the scientists believe it’s primarily due to entanglements, as well as changing ocean conditions that may affect food availability and the presence of more ships that create noise during the whales’ summer feeding periods.

He added the worry is that the smaller size will translate into a less viable population, as mothers who are smaller will give birth to smaller calves, which could translate into fewer calves surviving. Meanwhile, the mothers may have reduced birthrates and longer periods between pregnancies.

Meanwhile, smaller, weaker whales may be less able to tear themselves free from entanglements.

Amy Knowlton, a researcher at the New England Aquarium in Boston and study co-author, said in an interview that of 347 right whales observed in a 2018 study, scientists documented 59 new entanglements based on scarring or attached gear, which is 17 per cent of whales observed in that year.

When scientists looked at the entire population of 761 whales assessed from 1980 to 2018, 658 of them — or about 86 per cent — showed evidence of one or more entanglements.

Based on the latest findings, the researchers, which included a team from Oregon State University, are repeating calls for strong management actions to reduce the impacts of fishing gear and vessel operations. Knowlton favours shifting to a regime where fishers don’t use ropes in areas the right whales frequent.

“It’s becoming more urgent, because this research shows there are impacts of the entanglements that are long-term and not easy to evaluate,” she said in an interview. “I think there has to be a huge shift in the fishing industry in both the United States and Canada.”

Michael Moore, a co-author and researcher at Woods Hole Oceanographic Institution in Maine, said the study shows that simply stopping deaths of the whales won’t save the species.

“Unless we reduce the sublethal trauma of entanglements and vessel strikes, we’ll never recover the species, because we’ll still have a seriously reduced reduction in calving success,” he said.

In the past four years, the Canadian government has imposed a series of measures to protect the whales, including periodic fisheries closures and mandatory speed limits that apply to much of the Gulf of St. Lawrence but not the Cabot Strait. At least 34 North Atlantic right whales died between 2017 and 2021 — 21 of them in Canadian waters.