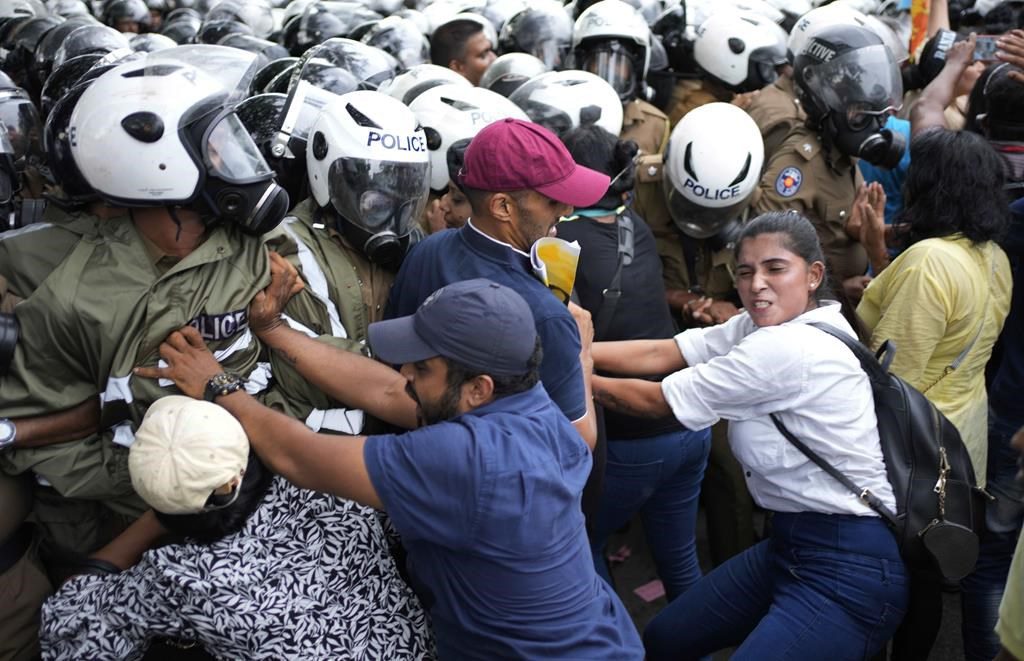 COLOMBO, Sri Lanka (AP) — The Sri Lankan government is being urged to drop charges against two protest leaders detained for more than three months following the anti-government demonstrations that engulfed the island nation earlier this year.

Amnesty International also renewed its call for Sri Lanka to repeal the harsh, civil war-era Prevention of Terrorism Act under which the two protest leaders are being held.

Wasantha Mudalige and Galwewa Siridhamma, both university student leaders, were arrested in August and have been detained for more than 90 days under the PTA.

Thyagi Ruwanpathirana, Amnesty International’s South Asia regional researcher, urged the government to drop the “baseless terror charges” against the two leaders and also not to extend their detention.

Mudalige and Siridhamma, who is also a Buddhist monk, were actively involved in this year’s anti-government protests and their arrests drew wide condemnation from opposition lawmakers and rights groups who say the duo have been detained without legal basis.

In recent weeks, opposition groups and rights activists have been staging frequent protests to demand the release of two leaders and end to a government crackdown on anti-government demonstrations over economic hardships.

“The continued targeted persecution of student leaders in Sri Lanka has a chilling effect on civil society and the right to protest,” Ruwanpathirana said in a statement released late Wednesday.

There was no immediate comment from the government to the Amensy’s statement.

For years, opposition lawmakers and trade union and civil rights activists have been urging the government to abolish the PTA.

It was amended in March, but opponents called the reforms cosmetic and said the law still allows the detention of suspects without warrants and the use of confessions obtained through torture. They say the law, introduced during Sri Lanka’s civil war in 1979, has been widely abused, causing a large number of innocent people to spend years in prison without trial.

Sri Lankans protested for months earlier this year over the economic crisis, which has led to severe shortages of many essential imported items such as medicines, fuel and cooking gas. Thousands stormed the president’s residence in July, forcing then President Gotabaya Rajapaksa to flee and later resign.

The protesters also occupied other key government buildings, including the offices of the president and prime minister.

The country’s new president, Ranil Wickremesinghe, cracked down on opposition, ousting the protesters from the government buildings.

Dozens of protest leaders and activists have been arrested, with some later released.

Dozens of protest leaders and activists have been arrested, with some later released.

The months of protests earlier this year dismantled the powerful Rajapaksa family’s grip on politics. Before Rajapaksa resigned, his older brother stepped down as prime minister and three other family members quit their Cabinet positions.

Wickremesinghe was elected by Parliament to complete Rajapaksa’s term, which ends in 2024. He is unpopular because he is supported by lawmakers who are still backed by the Rajapaksa family, which ruled Sri Lanka for most of the past two decades. Many accuse Wickremesinghe of protecting the Rajapaksas, who are widely blamed for corruption and misrule that led to the crisis.

Sri Lanka is effectively bankrupt and has suspended repayment of nearly $7 billion in foreign debt due this year pending the outcome of talks with the International Monetary Fund on an economic rescue package. The country’s total foreign debt exceeds $51 billion, of which $28 billion has to be repaid by 2027.